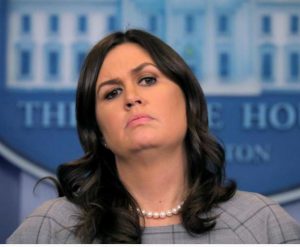 SANDERS: Hobnobs with GOP bigwigs as speculation on run for governor heats up.

Politico with yet more scuttlebutt on a possible run for Arkansas governor by Trump apparatchik and habitual liar Sarah Huckabee Sanders:

Sanders, who is seen as a possible 2022 Arkansas gubernatorial candidate, attended a dinner hosted by the family of the late Fred Malek, a major GOP donor and former RGA finance chairman who died in March. The dinner kicked off a two-day retreat the RGA is hosting in Aspen, Colo., which is expected to draw an array of GOP governors and donors.

Sanders stepped down from her position as White House Press Secretary last month, and the chattering classes in Washington and Little Rock are atwitter over her next move. Trump himself said she would be “fantastic” in the governor’s mansion.

She doesn’t know. I mean, that’s the honest answer. The truth is, she has not had time to come up for air in the past three years. So she’s going to take some time to get her kids enrolled in school in Arkansas for the fall, go to vacation, just have some downtime — which is something she hasn’t done. And, you know, then she’ll start exploring.

Cue Tim Griffin with steam coming out of his ears.