One thing was made abundantly clear at Verizon Arena Tuesday night: Fervor for the Notorious R.B.G. is alive and well in Arkansas. The stadium concert venue for Supreme Court Justice Ruth Bader Ginsburg’s Frank and Kula Kumpuris Distinguished Lecture ⁠— a series from the Clinton Foundation and the Clinton School of Public Service ⁠— sold out mere minutes after the reservation link for lecture went live earlier this summer, quickly outgrowing its original location, the Jack Stephens Center at UA Little Rock.

Following an adoring introduction by President Bill Clinton, who appointed Ginsburg to the Supreme Court in 1993, esteemed NPR journalist Nina Totenberg sat opposite Ginsburg posing questions, all carefully worded to produce the choicest of Ginsburg anecdotes. Between the two women: years of mutual admiration, a vase of flowers and a pair of coffee mugs emblazoned with bold capital letters so that together, they spelled out “DIS-SENT” ⁠— a nod to the justice’s famed penchant for impassioned disagreements with the court’s majority opinions.

Well before 4 p.m. Tuesday, cars had swarmed the sun-drenched blocks surrounding the arena, security teeming. The thermostat in the arena had been knocked down a degree or ten, seemingly bracing itself for the influx of body heat that’d barrel through the doors when they opened to the public.

And, when that happened, Ginsburg showed up early ⁠— on the fronts of t-shirts, emblazoned on the sides of tote bags and in subtler sartorial nods — a gavel-shaped brooch here, a white plumed chiffon bow-tie blouse mimicking a judge’s collar there. (Fittingly, the gentle Bela Fleck tunes wafting from the loudspeaker early in the afternoon gave way to bolder statements: Christina Aguilera’s “Fighter” and Zara Larsson’s “Make That Money Girl.”)

Half feminist superhero, 100 percent pop culture icon, Ginsburg hasn’t so much taken the sledgehammer to the proverbial glass ceiling as she has chipped away at it with her gavel — reproducing a blueprint of the ceiling’s dimensions, studying it with a surgeon’s precision and taking its architects to court.

Her biography is one long mic drop — the daughter of a Jewish immigrant who got demoted from a job for becoming pregnant, then tied for first in her class at Columbia Law School. She’d (literally) write the school’s casebook for sex discrimination, and then meet that discrimination head-on in her own career, triumphing over her detractors with strategically timed arguments, with legendary dissents or — as she detailed in an interview with Totenberg earlier this year — by simply outliving them. There’s a reason an entire island at the Clinton Presidential Center’s gift shop is bedecked with RBG merch; Ginsburg is an OG feminist, a fiery queen of one-liners and an absolute master of navigating tricky moral territory — at once the Patroness Saint of dissent and the picture of scrupulous caution, simultaneously a fearless pioneer and a steadfast steward of constitutional precedent. She’s the subject of an opera, a Lego figurine, multiple documentaries and a viral Internet meme cementing her badassery with a formidable nickname: the Notorious R.B.G.

Clinton spoke of Ginsburg as “rigorous but warm-hearted,” someone who he’d hoped could “translate the hopes of the American people” into policy. He recalled her nomination process, and the day when she — then Judge Ginsburg — became, for him, the clear frontrunner among the three remaining candidates. “Hillary and other people,” Clinton said, “had already told me I needed to take a hard look at Judge Ginsburg. You need to know about this person because she’s a person who actually lives what she believes.” For Ginsburg, he said, “ ‘We the People’ means all of us.”

And, he joked that he’d tried to entertain Ginsburg in the moments in the way over to the arena, telling her about his “adventures and misadventures” in Arkansas politics. “One thing I did not see coming,” Clinton said, “was her ascendance to pop culture icon. Her workout routine is to be marveled at. … You can see her image on t-shirts, coffee mugs and tote bags the world over,” Clinton said, and added, with performative jealousy: “You might come to resent such a person.” Clinton’s biggest applause line, though, came at 7:05 p.m., when he said: “Only one person here appointed her. One person here voted for her — Sen. David Pryor. But we all hope that she will stay on that court forever.”

Ginsburg, decked out in black lace gloves and an elegant patterned blazer with black piping, stopped halfway up the stairs to acknowledge the thunderous reception from the crowd, the size of which Totenberg said was (ahem) unprecedented for her and Ginsburg’s appearances. 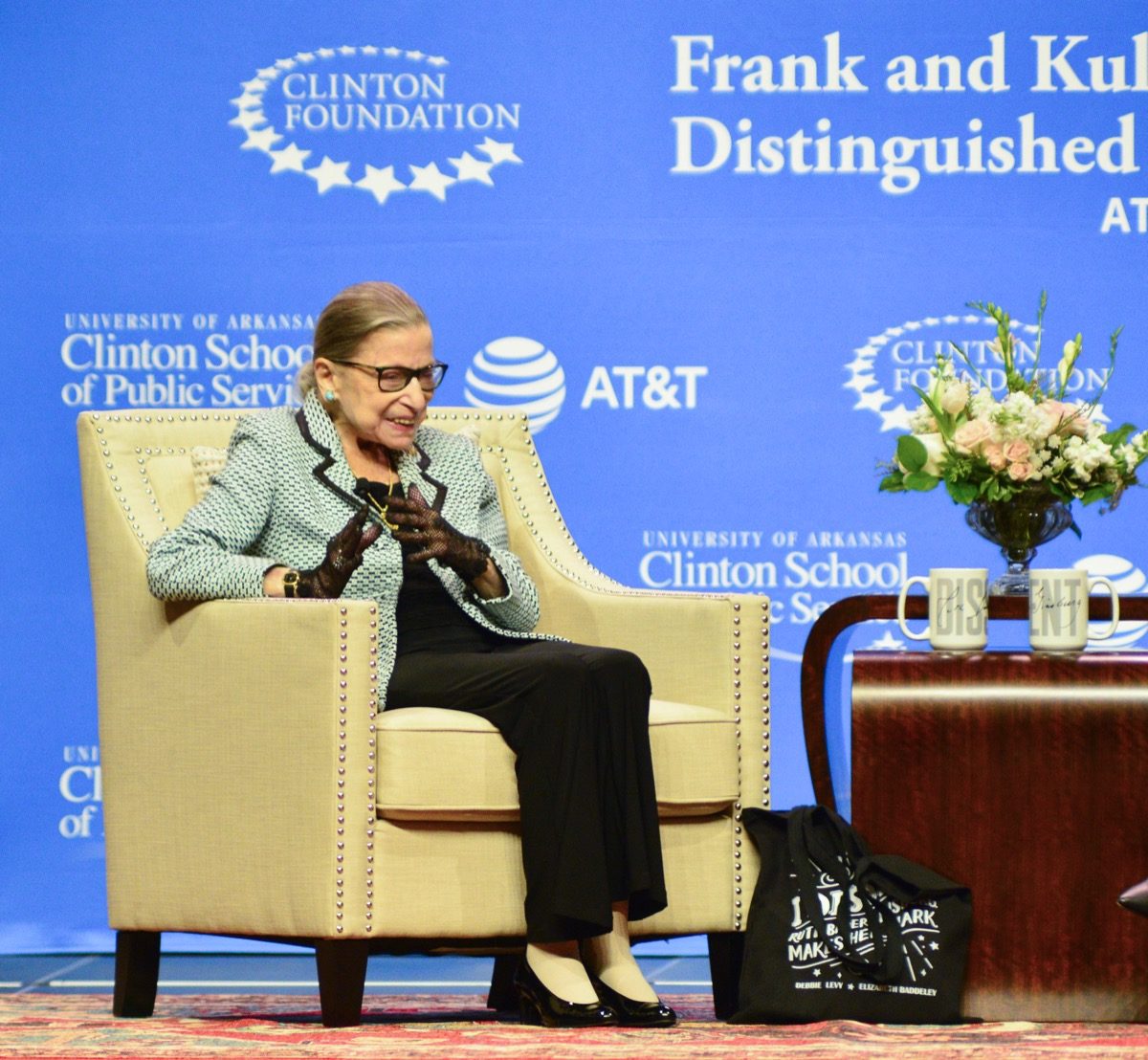 The fact that Ginsburg refers to her fellow Supreme Court Justices Sonia Sotomayor and Elena Kagan as “sisters in law.” Swoon.

The aforementioned black lace gloves. (Anything to keep RBG from catching cold on account of all those handshakes she’s probably offered, right?) 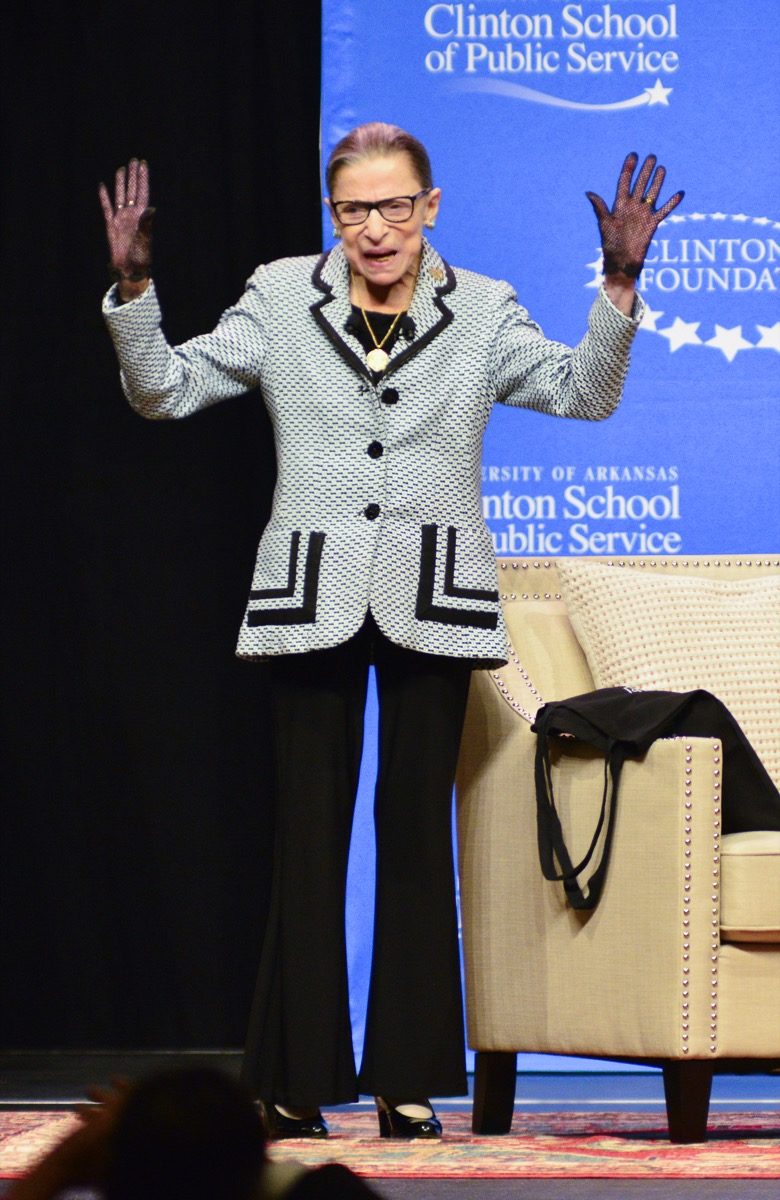 Ginsburg on whether women’s voices are undervalued (or ignored) in the workplace: “Well, that happened more than once. If I make a comment, no reaction. Then one of my male colleagues would say basically the same thing, and there would be a reaction. You don’t expect very much from a woman, so you tune out when she speaks. Now that I have two sisters-in-law, it doesn’t happen.”

Ginsburg on her unlikely friendship with Justice Antonin Scalia: “He had a marvelous sense of humor. … He would sometimes come to my chambers or call me and say, ‘Ruth, you’ve made a grammatical error. I don’t want to embarrass you by sending a note that would be circulated in a note to all of our colleagues, but you need to fix this up.’ “

Ginsburg, slyly, on her meetings with Clinton during the nomination process: “Sometimes with men, I detect a certain discomfort when talking with women. It was not that way with Bill Clinton.”

That part where Nina Totenberg paused a little while recollecting the margin by which Justice Ginsburg’s nomination was confirmed, and Ginsburg stepped in with a firm reminder: “96 to 3.”

Ginsburg on her first days as a woman on the Court, aside Justice Sandra Day O’ Connor: “In our robing room, there was a bathroom that said ‘MEN.’ Justice O’Connor had to go all the way back to her chambers. And when I came, they created a women’s bathroom.”

Totenberg’s word choice when asking Ginsburg to describe the year of her Supreme Court appointment, which seemingly lifted 16,000 sets of good Southern eyebrows at the halfway mark: “The year was 1993. The president was flirting with all manner of … Supreme Court nominations.”

Ginsburg on her son: “My son was a lively child. I called him lively. His teachers called him hyperactive.”

Ginsburg, recalling how, on a particularly difficult day at the law office, she’d replied to a representative at her son’s school who’d beckoned Ginsburg to come address his latest mischief: “This child has two parents. Please alternate the calls.”

Ginsburg on 2006-2009, the years after O’Connor retired, when she was the only woman on the Court: “It was a lonely position. The public would see these eight — rather well-fed — men!”

Ginsburg on her recent treatments for pancreatic cancer: “Aug. 23 was the last session. But I had promised the Clinton Foundation that I would be here. [standing ovation] … And I’m pleased to say, I am feeling very good tonight!” 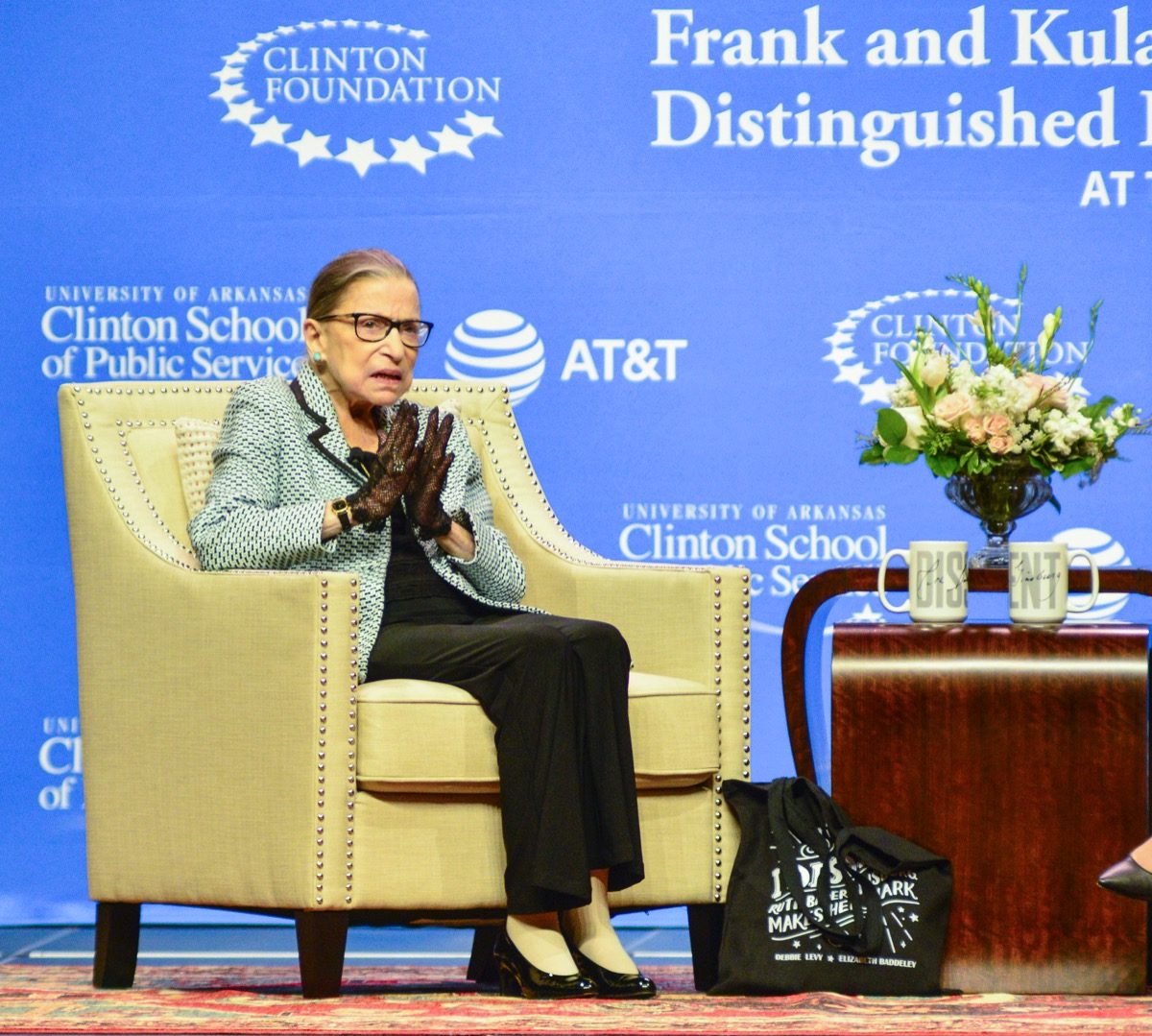 Ginsburg on working while facing adverse health conditions: “I think my work is what saved me. Instead of dwelling on my physical discomforts … I know I have to get it done, so I have to get over it. Justice O’Connor had a mastectomy and she was on the bench nine days after her surgery.”

On Weinberger vs. Weisenfeld: “It is one example of how gender-based discrimination hurts everyone. It hurts women, it hurts men, it hurts children.”