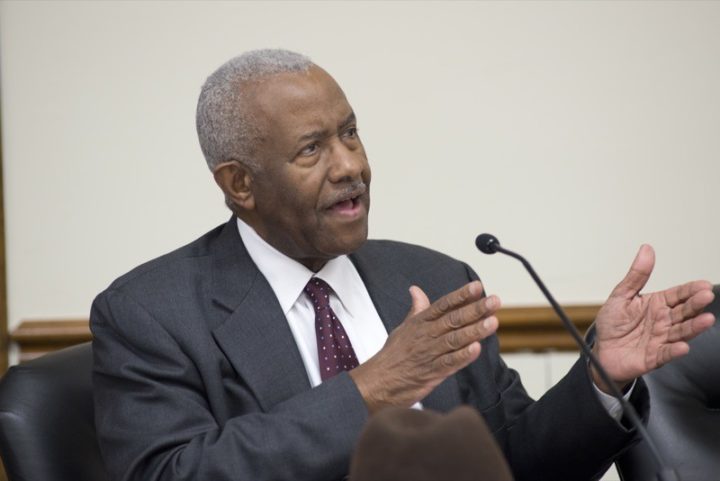 TRIBUTE IN ORDER: So Ernest Dumas writes about the late John W. Walker.

Ernest Dumas, whose career in Arkansas journalism has spanned the better than half-century John W. Walker established himself as the state’s leading civil rights lawyer, has written an editorial remembrance of Walker, who died earlier this week.

John W. Walker, a state representative and longtime civil-rights warrior who died in his sleep Monday morning at the age of 82, would have to be described as a politician since he spent 60 years tilting at the political institutions in his state and actually ran for public office himself six times. But he was the rare and perhaps unique politician who didn’t care at all for popularity and seemed even to court resentment, if not hatred. He found resentment and hatred in full measure but also, in the end, a small measure of goodwill among those who had been eternally vexed at his unrelenting championing of equality for African Americans in the public schools and colleges, public institutions and workforce —vexed at his methods at least, if not his goals. His lawsuits —scores of them in federal and state courts all across the state —would cost millions and millions of dollars to defend and nearly always in a losing cause. The law — the Constitution — was on his side.

Now John Walker ought to be accorded the recognition that he deserves. Arkansas has a few icons from the civil rights movement, notably Daisy and L. C. Bates, but Walker did more than anyone in history to bring a measure of equality and fairness to the social and economic institutions of the state. We are open to suggestions about the form of that recognition — no holiday, like Martin Luther King’s, but something . . . maybe an equestrian statue of him somewhere — the square at Bentonville? — to replace a Confederate monument.

We have come a long way in Arkansas and everywhere else, though not far enough, since Walker began his quest for equal justice in the mid-’60s and began slapping lawsuits on school boards, state institutions and big corporations like Walmart and Georgia Pacific that denied black children and adults equal opportunity and the just fruits of their labor.

Walker went to a poor school for black kids at Hope, got accepted at the University of Texas but then was denied admission when it was discovered that he was a Negro, then got a degree at Arkansas’s only public college for blacks (Arkansas Agricultural, Mechanical and Normal College), and a master’s degree in education from the prestigious New York University. Walker was actually qualified to be the state education commissioner in 2015 when Gov. Hutchinson got the state’s legal qualifications for the job eliminated so that he could hire the politician Johnny Key as the education czar. Walker got a law degree from Yale University, the celebrated school that produces most U.S. Supreme Court justices, including men like Brett Kavanaugh who, unlike Walker, hold that the Bill of Rights does not really mean what it says when it promises equal rights and due process for everyone, including women and ethnic, racial and sexual minorities.

After setting up a practice at Little Rock in 1964 and hooking up with the despised NAACP Legal Defense Fund, Walker took over the old Little Rock school case, which had led to the desegregation of Central High School in 1957 and the greatest constitutional crisis since the Civil War. He was unrelenting and led the schools back into federal court, this time with the state government involved because, as he proved in court, the state had for many years imposed a burden on Little Rock to educate black children from elsewhere in its substandard black schools. For some years, the state would have to subsidize education in the Little Rock schools to compensate for the state’s failures, which made John Walker a scorned man with nearly every legislator outside the county and many of their constituents. He sued the other school districts in Pulaski County and in the late 1960s many other school districts across eastern and south Arkansas that either stonewalled or dallied with phony measures like pupil-assignment systems to avoid putting white and black children into classrooms together, sometimes even with a black teacher.

With other young lawyers — Buddy Rotenberry, Norman Chachkin, Phillip Kaplan, Jack Lavey, Perlesta Hollingsworth, Richard Mays, John Bilheimer, Janet Pulliam, Frank Newell — who joined him in only the second integrated law firm in the South, Walker represented young African Americans or sympathetic whites who got arrested for picketing businesses that discriminated against blacks, for marching, for sitting in at lunch counters, for distributing literature on a state college campus, for trying to swim in a public pool, for trying to ride a commercial bus, or for trying to eat lunch at the cafeteria in the state Capitol.

He sued Georgia Pacific, the giant paper company at Crossett, because it hired blacks only for the dirtiest, hottest and lowest-paying jobs that no one else would do. Walker was notorious in the legal fraternity for his very casual preparation for trials. He apparently knew that he had the law on his side, so he just freelanced in the courtroom. At the trial, the corporation’s law team from Little Rock had prepared elaborately and Walker hardly at all. Walker politely needled the company’s personnel staff on cross-examination and turned them into blithering bigots, destroying the company’s case. The presiding judge, the conservative and segregationist former congressman Oren Harris, ruled decisively for the black employees and the union, and so did the 8th U.S. Circuit Court of Appeals. He won an employment-discrimination suit against Walmart for the company’s truck drivers.

So unpopular was John Walker that when Governor Winthrop Rockefeller appointed him to the state Board of Education on his way out of office in 1970 that even the Little Rock senators went along with silently blocking his confirmation. He would have been the first black member of the board in history.

Even Razorback athletics was not outside Walker’s target range. He unsuccessfully sued to get three black football players reinstated for the Orange Bowl and sued, again unsuccessfully, to get Nolan Richardson reinstated as the basketball coach of the Hogs after Frank Broyles persuaded the chancellor to fire the coach, who had complained about discrimination. Earning the enmity of the Razorback Nation was the last thing any politician wanted to do.

Walker ran for the legislature anyway in 2002 and was defeated, ran again in 2010 and was elected and then re-elected repeatedly. Lawmakers, who generally found little in Walker’s long history that they admired and few of his legislative proposals they would vote for, expected a bellicose and divisive adversary. Instead, they encountered a cordial, witty and almost soft-spoken colleague, who nevertheless persistently reminded them of the restraints and obligations imposed on them by the Constitution.

Gov. Hutchinson, rarely an ally, praised Walker effusively for his life of principle, as did another persistent naysayer, Attorney General Leslie Rutledge. It was left to the Arkansas Legislative Black Caucus to wrap up his life appropriately:

“Though often falling on unwelcoming ears, Rep. Walker never wavered on calling to attention that even today, the institutional, structural vestiges of racism and other injustices still haunt this American experiment called democracy. For him, the barriers to a high-quality education seemingly most offended his sense of justice.”