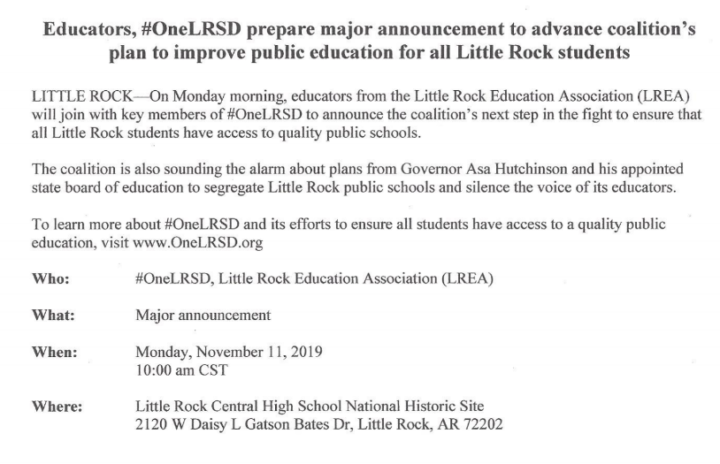 Will the subject be a teacher strike? Such a job action has been discussed — and city and school officials have been making contingency plans for one — ever since the state Board of Education made it clear the Hutchinson administration 1) had no intention of returning full control of the district to Little Rock voters 2) it intends to segregate operation of several schools away from hiring decisions and other oversight by an elected board, and 3) it has no intention of allowing a union to represent teachers in the district.

For all the disrespect the state has heaped on teachers, I’ve said before and I’ll say again that I have deep misgivings about the usefulness of a teacher strike. It will throw Gov. Asa Hutchinson into an anti-union briar patch in which he can gorge on the brambles. Realistically, the district can’t provide meaningful education for its 22,000 or so students with a substitute force. Parents have to work. The chance of winning substantive gains from a union-hating Board of Education and Republican-dominated government seems slim. The lack of good faith on the part of the state in taking unannounced, undebated, unsubstantiated punitive action while making teachers scapegoats for poverty should make any fair-minded person sympathetic to teachers.

But would a strike advance the cause of access to quality education? Perhaps another topic will be discussed. The state Board of Education meets Thursday when it may take action on school board zones and school attendance zones (the latter without any advance preparation so far). It seems likely to be a day with more drama, whatever the specifics.