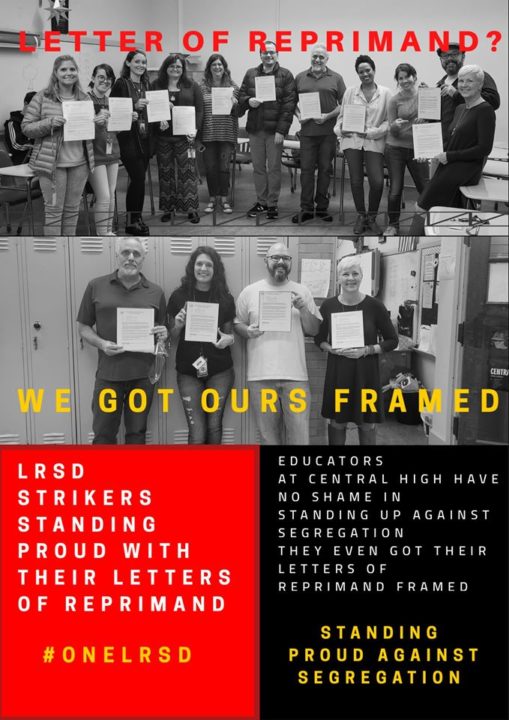 It would appear Little Rock teachers aren’t buying the spin of Gov. Asa Hutchinson, his puppet Education Commissioner Johnny Key or their tool, LRSD Superintendent Michael Poore, in attempting to make teachers look bad for their one-day strike in protest of years of disrespect by the state Board of Education.

Poore’s stern letter of reprimand, with its warning of future unspecified discipline? Many are framing it, as seen in this Facebook post by the Little Rock Education Association.

In other Little Rock school news, Twitter users might take a look at some weekend dialogue on that medium between critics and Jeff Wood, Asa Faubus’ hand-picked and Republican-certified leader of the puppet Community Advisory Board that has served as a useful cutout for the governor’s LRSD whims.  Wood, you may recall joined up with the late Justice Jim Johnson’s son, Sen. Mark Johnson of Ferndale, whose district doesn’t include the Little Rock School District, on unsuccessful legislation to continue state control of LRSD for seven years. (Johnson also was instrumental in  legislation packing the School Board, when allowed to operate again, with two more  members, a move that increases the odds that the board won’t have a majority of minority members as it did when dissolved in response to a chamber of commerce-led putsch. The school district is near two-thirds black in student population and a bare majority of total population is majority black and Hispanic, according to recent state data.

Wood claimed he wanted to continue state control for seven years only to be sure the district got improvements in instruction for dyslexic students done right. Jim Ross, a member of the board ousted by the state five years ago, and Sen. Joyce Elliott were among those disputing Wood. Ross said Wood’s primary interest was in creating a new high school to be fed by the new majority white elementary and middle schools in Northwest Little Rock, but using dyslexic students as a pretense.

One of Elliott’s comments:

I know, and I am extremely bothered for the false choice that seemingly must be embraced: advocate for literacy or for local control. There is a fight being waged without a foe among those who want local control. Damn, I wish folks would just accept we can walk and chew/tobacco..

The exchanges included photos of leaking roofs in schools in the center city, as compared with shiny new facilities in Wood’s part of town. He blamed that on those who voted against a tax increase without elected representatives to spend it and charter school advocates lurking to scoop up improved buildings once done.

One of Ross’s comments:

We know you by your fruit. You support sports facilities over leaking roofs in majority black schools, teachers who organize are given no voice, and building a northwest school while ignoring schools to the south of 630 and east of John Barrow. #ONELRSD #ReclaimLRSD #OurLRSD https://t.co/5cjIlfc6Ah