The Presidential Inaugural Committee (PIC), a nonprofit established to organized Trump’s inauguration with charitable funds, wasted around $1 million in overpayment for event space at the Trump Hotel, the lawsuit alleges.

One of the committee’s top event planners unsuccessfully made multiple attempts to raise concerns about these overpayments, according to the lawsuit, including direct appeals to Donald and Ivanka Trump.

Among the lawsuit’s allegations: 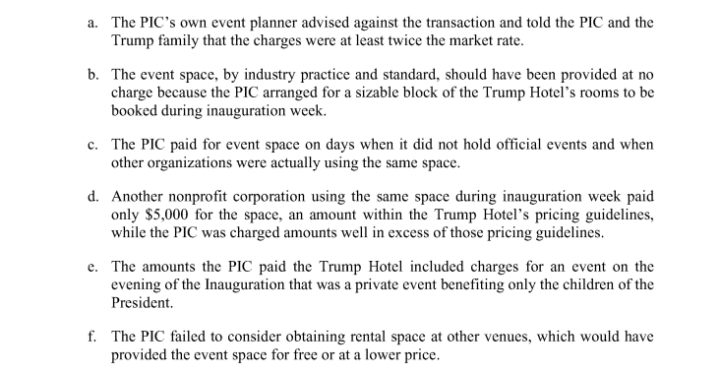 The for-profit Trump Organization sought to improperly overbill in a four-day contract for use of space at the downtown Trump Hotel during the inauguration — using the ostensibly charitable nonprofit inauguration committee as a vehicle to maximize revenues, the lawsuit alleges.

The Trump Organization’s leadership “at their highest levels” were aware of this malfeasance and members of the Trump family were directly “involved in the negotiation of this unconscionable contract,” according to the lawsuit — which includes emails sent to Ivanka Trump expressing concerns about overpayment, as well as descriptions of a meeting that a concerned event planner had with Ivanka and Donald Trump. “The President-elect acknowledged these concerns and directed that Ivanka Trump would handle this issue,” the lawsuit states.

However, Rick Gates, the committee’s deputy chairman, continued to negotiate to agree to the unfair terms of the contract, the lawsuit alleges. Internal emails from the committee leadership suggest that Gates was working directly with the Trumps on these shenanigans: “Rick is determining the master buyout cost with the family and Trump Hotel team directly.”

One event held at the Trump Hotel under this contract was a private reception for the Trump family. The committee’s staff became uncomfortable with holding a private event using nonprofit funds, and decided to cancel the event. A Trump Hotel official then intervened with Gates, writing: “Just heard that the Friday night reception had been cancelled. Is it accurate? Tough on us if it is as it was a lot of revenue for 1,250 ppl…” Gates responded that he would work to protect the Trump Hotel’s bottom line.

Trump Hotel officials eventually persuaded Gates not to cancel the private event, which ended up costing the committee more than $300,000. Gates informed Ivanka Trump by email about the plan to hold the event but hid it from key committee staff, who were still under the impression that it was cancelled.

ProPublica, which has been reporting on these issues, has a deep dive on the lawsuit, recommended.

One close-to-home angle here that ProPublica points out: Chronic liar Sarah Huckabee Sanders, the former Trump apparatchik, was asked about these issues in December 2018, when she was press security. “The president was focused on the transition during that time and not on any of the planning for the inauguration,” she said. Documents and evidence uncovered by the D.C. attorney general suggest otherwise. Ivanka Trump previously likewise issued statements downplaying her involvement that are contradicted by materials in the lawsuit.