With caucus day being a weird day of anticipation, we spent part of the day traveling to different campaign offices to capture their level of activity and tenor. We were also curious where each campaign was encouraging caucus observers to attend as some signal of where they thought they had strength. Obviously, different campaigns have different roles for their various offices, but most have a headquarters in the Des Moines area. Somewhat unsurprisingly, as the campaign most reliant upon grassroots work in its strongest locale, the greatest energy was at the Sanders HQ near the Des Moines airport. The Sanders campaign claims to have hit “a door each second” over the weekend.

Like other campaigns, especially the Buttigieg operation, there has been great reliance on out-of-state volunteers for the late surge of activity for Sanders. Based on energy at the Klobuchar Super Bowl watch party at Jethro’s BBQ in nearby Johnston, she also has built a vibrant operation in Iowa. (Klobuchar had to cancel her own appearance there because of her trip back to Washington to be an impeachment trial juror.) Two other office visits — to the Steyer and Warren campaigns — showed less energy and activity but, particularly from the Warren folks, genuine friendliness from local volunteers. The one campaign that seemed ready to have Iowa over with was the Biden operation. No matter the result, it’s been a tough few months for the Biden campaign and they’re ready to move to (literally and figuratively) warmer environs like South Carolina.

Of course, it’s all about the numbers, although — as Nate Cohn notes in the New York Times — those numbers could be complicated and confusing based on the various rounds of voting. In terms of the overall turnout, the closer the caucus turnout gets to 239,000 Democratic voters that turned out in 2008, the better for Sanders. The closer to the 175,000 voters in 2016, the better for the other candidates. It also matters where those voters are, as Sanders will likely overperform in Des Moines and college towns but there is some malapportionment to rural areas that will be better for Buttigieg and Klobuchar in particular. 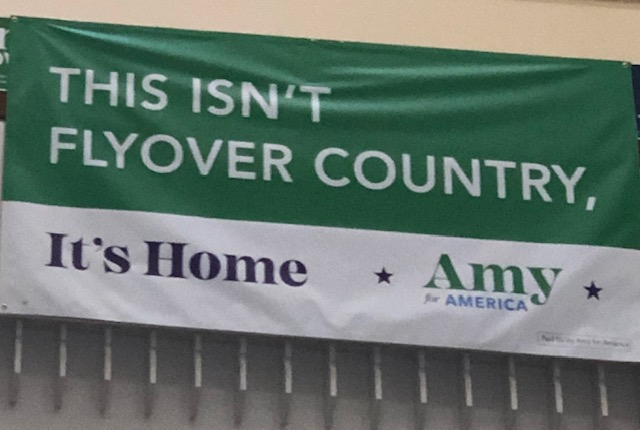 The Klobuchar campaign’s banner for election night at the downtown Marriott in Des Moines.

Our caucus site for the evening: Theodore Roosevelt High in a neighborhood just to the west of downtown Des Moines where several different precinct sites are merge. Fun fact: Roosevelt High’s most prominent alum is Cloris Leachman (yes, she’s still alive at 93).