My caucus night was spent at Des Moines precinct 43, one of three larger caucuses at Roosevelt High, just to the west of downtown Des Moines. It’s a neighborhood that is historically Jewish, very stable and highly educated. A number of kids of different ages joined their parents at the caucus held in the school cafeteria along with a fair number of national media, including Frank Luntz. Attendance was up only slightly over the 2016 caucuses with 473 folks turning up. The caucus chair ran the large caucus with real grace and the participants showed a good deal of respect for others. All five major candidates had good organization and were well trained to deal with the changes in the caucus rules for 2020. So, based on this glimpse, it doesn’t seem that the problems that emerged with the Iowa voting processes were with the training about the rule changes, but instead with the technology after the fact.

Early on it was clear DM 43 was going to be a good showing for the Warren campaign as her supporters spilled out into the room from their corner, passing out sugar cookies along with healthy snacks (naturally). The Buttigieg supporters — who were also very social, spreading across the room — showed up early in good numbers and personified the mayor’s strength across all demographic groups (a pattern across the state on caucus night that paid off for him). 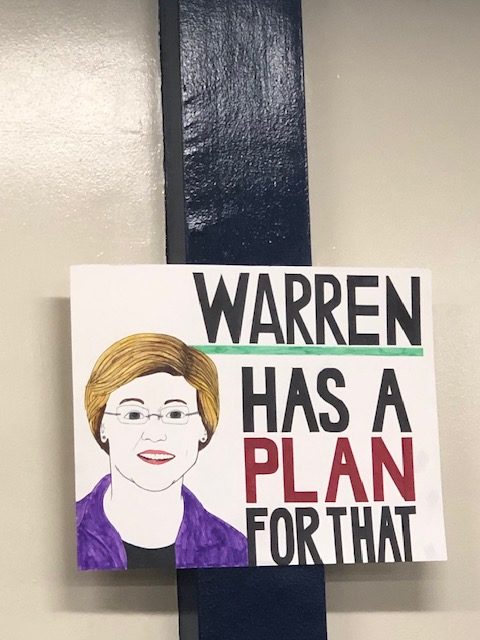 Sanders’ group in the opposite corner of the cafeteria was similarly large but younger than other groups and definitely kept to themselves (however, they did have particularly yummy brownies to share). They were prepared for a long evening with song sheets to provide supporters something to do to keep them in the room, singing the old union song “Solidarity Forever” as other parts of the room were counted. In later rounds, the Sanders crew made no effort to reach out to other nonviable candidates’ supporters. In a pattern shown in precincts across the state, this inability to reach out beyond their ranks meant that other candidates were able to catch up to Sanders’ initial support through gaining standing in later sorts.

The Biden and Klobuchar groups looked a lot alike, particularly in their being almost entirely over 60 with a significant number immobile. A handful of Yang supporters were the only other group of any size in the room, but it was clear they would never be viable. 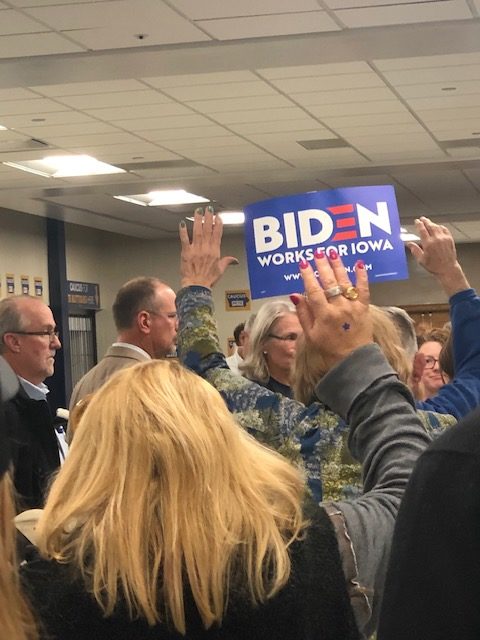 Initially, both Klobuchar and Biden were both short of the magic viability number of 71, but their precinct captains did show their experience in fighting to get there by pulling in extra votes. The Klobuchar campaign got to 71 mainly by luring over a few Biden women and the Biden campaign got there in round 2 through getting most of the Yang Gang after their candidate failed to get to viability. After it was all over, the Biden captain said, “We worked for it.”  Final result from DM 43: Warren 3, Buttigieg 2, Sanders 2, Klobuchar 2, Biden 2.

More on the results of the caucuses later along with the implications of the reporting fiasco on the future of the caucuses. A couple of initial thoughts, however: It seems clear that, as in DM 43, it wasn’t a strong night for Joe Biden and the absence of clear results Monday may have actually been very good for the former vice president’s ability to limp out of Iowa. Second, it was noteworthy how well the activists for all the candidate did their job for the democratic process and how angering that the failure of technology undermined that commitment and good work.