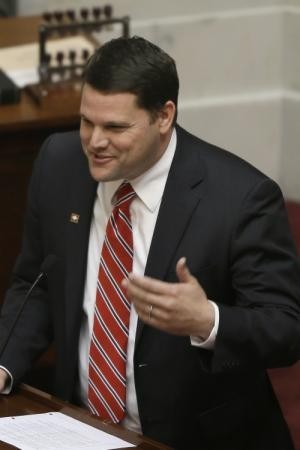 It takes but a cursory glance at news outlets to get a rise in blood pressure from the latest Trumpian outrages. And, closer to home, Sen. Bart Hester showed his backside again yesterday.

Examples of blood boilers on the national level today:

President Trump has instructed his White House to identify and force out officials across his administration who are not seen as sufficiently loyal, a post-impeachment escalation that administration officials say reflects a new phase of a campaign of retribution and restructuring ahead of the November election.

On Friday evening, by a 5–4 vote, the Supreme Court allowed the Trump administration’s wealth test for immigrants to take effect in Illinois. All four liberal justices dissented from the order, which changes relatively little: Thanks to the conservative justices’ intervention in January, the wealth test was poised to take effect in 49 states, and Friday’s vote lets the government apply it in the last state left. What’s most remarkable about the decision is Justice Sonia Sotomayor’s withering dissent, which calls out—with startling candor—a distressing pattern: The court’s Republican appointees have a clear bias toward the Trump administration.

… in this administration, good men and women don’t last long. Joe was dismissed for doing his job: overseeing the dissemination of intelligence to elected officials who needed that information to do their jobs.

As Americans, we should be frightened — deeply afraid for the future of the nation. When good men and women can’t speak the truth, when facts are inconvenient, when integrity and character no longer matter, when presidential ego and self-preservation are more important than national security — then there is nothing left to stop the triumph of evil.

President Trump has directly weighed in on the White House review of a forthcoming book by his former national security adviser, telling his staff that he views John Bolton as “a traitor,” that everything he uttered to the departed aide about national security is classified and that he will seek to block the book’s publication, according to two people familiar with the conversations.

But for the larger issue of censorship, I’d be tempted to say this serves Bolton right for protecting his book over his country.

Things aren’t much better closer to home, with the likes of demagogue Sen. Bart Hester grossly misstating Arkansas Supreme Court actions in ill-conceived furtherance of his and other Republicans’ mission to bend the courts to legislative control.

It ruled that a man accused of murder can’t be tried in Arkansas on a related rape charge that occurred in another state. Maybe Missouri could charge Bart Hester with something he did in Little Rock and try him in St. Louis. What’s worse, he called the court a “friend of a child rapist.” Outrageously slanderous, but typical for Hester.

Hester also seemed to suggest that it was out of line for the Supreme Court to even hear an appeal from a man on Death Row convicted of killing the child of state Rep. Rebecca Petty. The court rejected the argument, but Hester seems to suggest criminal defendants should be summarily denied access to courts on, well, who knows what grounds?

What’s worse in the Democrat-Gazette’s account of Hester’s remarks were namby-pamby responses from the likes of Senate and House leaders Jim Hendren and Matthew Shepherd, the latter a lawyer. Hester’s entitled to his opinions, they more or less said. Of course he is. And people of principle are equally entitled to speak up. They COULD say they believe in the separation of power, constitutional due process and a presumption of fairness on the part of judicial decision-makers as opposed to rank demagoguery and dishonesty.

Hats off to Sen. Jimmy Hickey of Texarkana, who’s challenging Hester for Senate leadership. He expressed sympathy for Rebecca Petty and noted that Hester was speaking for himself. But he added:

However, I strongly disagree with his comments. The judicial branch, whether through the Supreme Court or a District court, are literally dealing with thousands of issues with much detail in a society which is sometimes unsettling to say the least. It is incumbent upon us as senators and legislators to show respect for this branch of government in the same way as we wish them to show it to us as the elected legislature.

That kind of statesmanship will undoubtedly cost him votes in the leadership race.