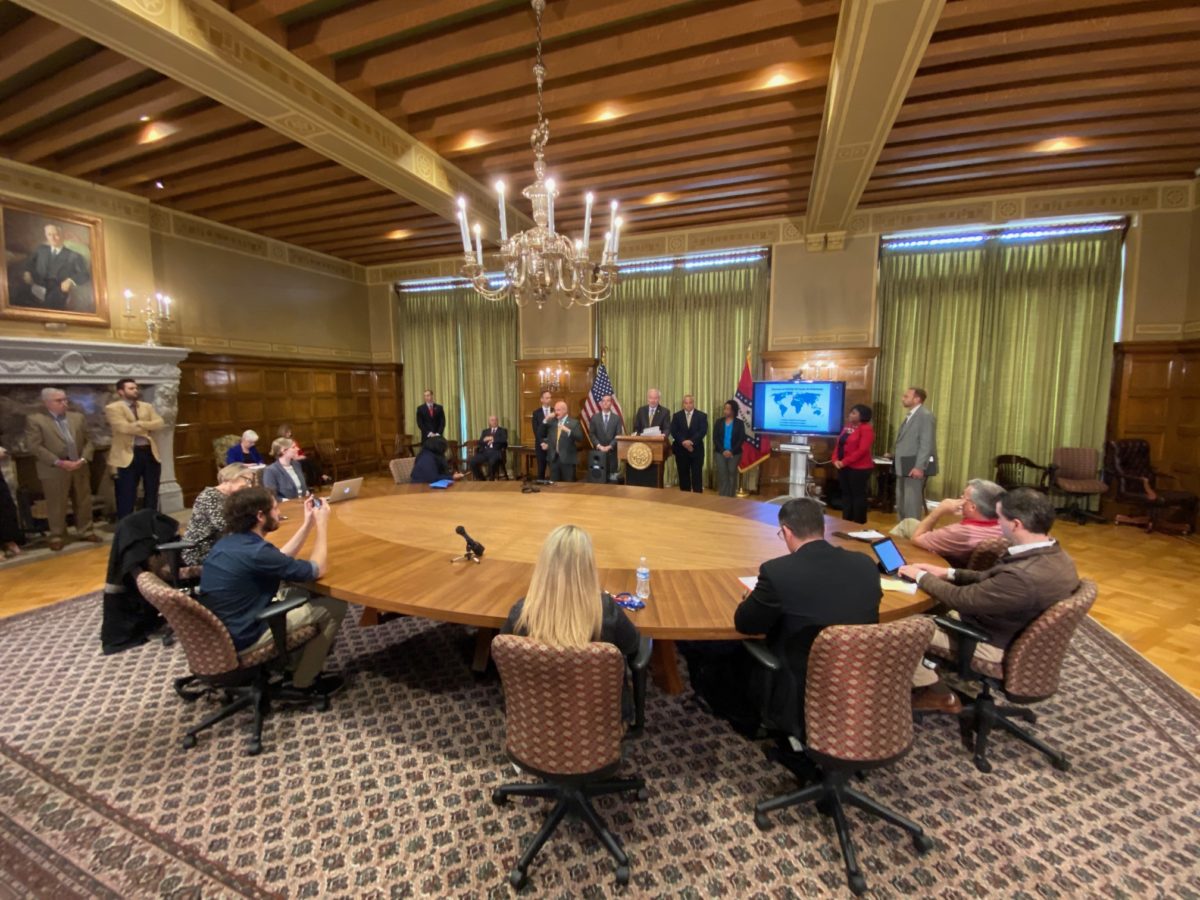 He noted the rise in confirmed cases to 33, up further from the 30 just recently announced, up from 22 yesterday. UPDATE: The number moved up to 37 Wednesday evening. Cases were added in Bradley as well as Faulkner and Washington County. Most are extensions of clusters related to the original case of a person hospitalized at Jefferson Regional Medical Center in Pine Bluff.

He said he expected more cases to come and noted the big percentage jump today from no increase yesterday. “Someday it might flatten,” but he warranted against “a false sense of security that we’re over this.”

He noted there’d been 236 negative tests against the 33 positive tests and urged people not to panic because people they knew had been tested. 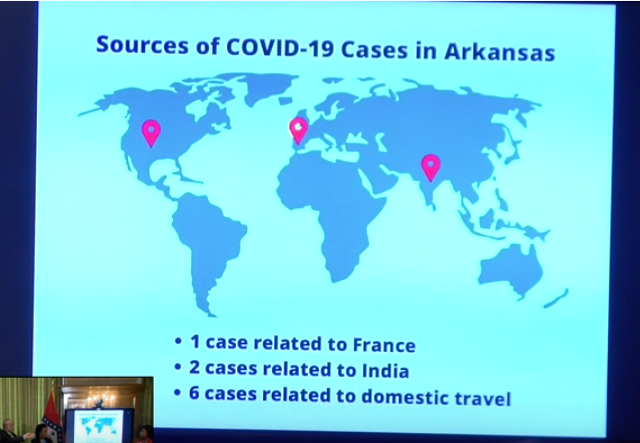 He noted most Arkansas cases were related to travel, not just foreign, but also domestic from places ranging from Colorado to New Orleans

“Everyone needs to rethink the risk of travel,” he said. “You meet with people you don’t know and come back” and it leads to problems.

On the economic end of things:

He will allocate $12 million in community development block grant funds to nonprofits, such as hospitals, and small businesses to help. This is money from the federal government and will be allocated according to their guidelines.

The state will also use $4 million from the governor’s quick action closing fund as a bridge loan program to help businesses make payroll. Loans up to $250,000 will be allowed.

He has made a request for a disaster declaration to allow federal small business loans up to $2 million.

He said 803 childcare providers in Arkansas had closed. He said the state would provide incentives for child care beyond the ordinary child care vouchers. These will be incentives to those centers that stay open. They’ll get $5 to $10 per day, depending on the age of the child, beyond normal reimbursement rates. Certain rules on hiring and mixing of children of different ages will be waived.

He said food stamp disqualification would be suspended until April.

Hutchinson said he’d spoken with legislative leaders and they were supportive.

The work rule for food stamps will be waived in April and May, DHS Director Cindy Gillespie said. She also promised an expedited eligibility process.

In response to questions, the governor said he was still planning for resumption of school after spring break, but acknowledged the situation was unpredictable.

He acknowledged some glitches when the on-line unemployment benefit option began yesterday. Commerce Secretary Mike Preston said, “Stick with it, we’re working through it.” He said a statewide call system should be up by Friday and alleviate pressure.

Hutchinson indirectly responsed to calls for a broader shutdown by people like state Rep. Denise Garner and U.S. Sen. Tom Cotton. He continued to say he favored businesses remaining in operation. If they shut down it will be a drag on economy and hurt families, he said.

He continued to draw a distinction between a workplace, where precautions and distancing can be accommodated, unlike say a mass gathering. “We need to continue to do business in Arkansas.”

He noted his executive order allows the state to prevent cities from making different rules, for example in operation of restaurants and bars. They can suggest, but not mandate. He said the public will be careful. “So far, I think it’s working well. If we have to take additional steps we will.”

The governor said he’d told an inquiring national reporter he had no plans to close the borders of Arkansas.