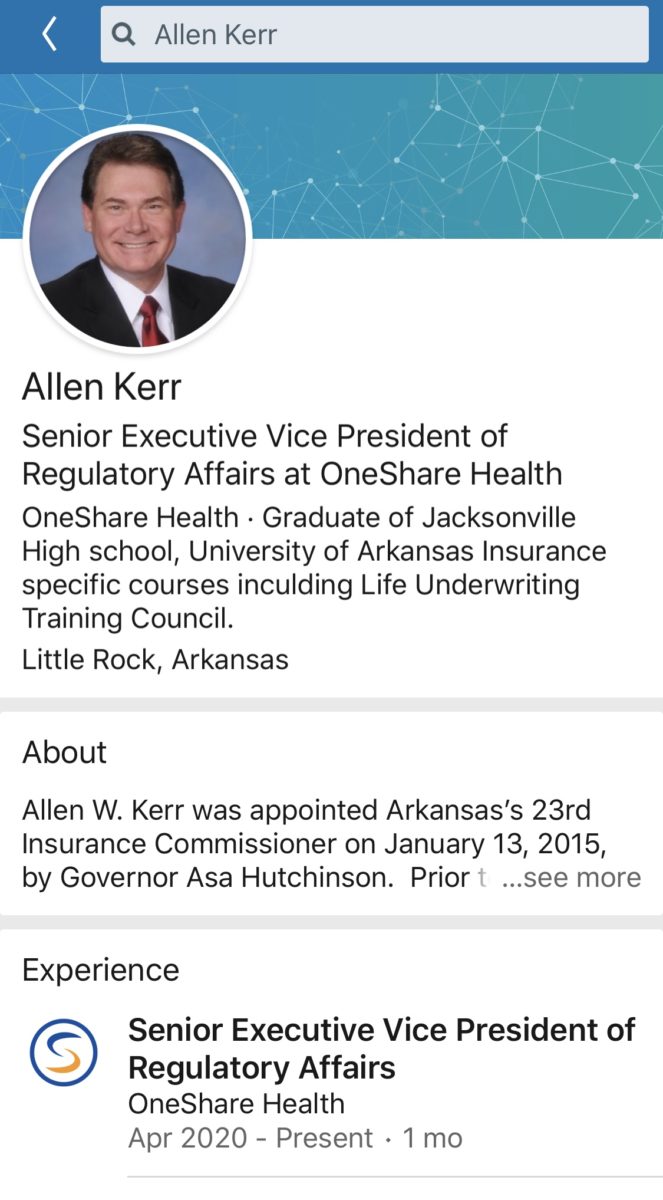 When Allen Kerr abruptly departed as Arkansas insurance commissioner, a release said he was headed to the private sector but nobody would say where.

Now we know from his profile on LinkedIn. If he has a national portfolio, it looks like his help on regulatory affairs might be needed in Washington state, based on a release last week.

OneShare Health markets itself as a health care sharing ministry but fails to meet the legal definition under state law. It has nearly 1,100 members in the state who paid $1.2 million in premiums. Four members complained to Kreidler’s office about unpaid claims and attempts to cancel coverage.

“This is another sham health care sharing ministry that is preying on people who think they are buying health insurance,” said Kreidler. “The reality is that they are collecting hundreds of dollars a month from people and, in some cases, saddling them with 100% of their medical bills.”

News about Kerr happened to arrive just a few days after a release on another person with Arkansas roots who’d hooked up with One Share. That would be Mike Huckabee, the former governor who fled for tax-free Florida and a $3 million beach manse from which he’s used clout to get the public banned from the beach out front. News release says the Huckster, now a cable TV host on a religious network has joined the board of directors of OneShare. The release didn’t mention if Huck, proud father of Donald Trump’s mouthpiece, Sarah Huckabee Sanders,  will be paid as a board member. From that release:

After joining OneShare Health’s Board of Directors, Huckabee said he appreciates the strides the company is making towards providing affordable healthcare options. “As a Baptist minister, I am inspired by the familiar verse in Galatians 6:2. That verse teaches that Christians are to ‘Bear one another’s burdens, and so fulfill the law of Christ.’ At OneShare Health, we believe that bearing one another’s burdens should extend into all areas of life, including healthcare.

“We have an incredible opportunity to shine a beacon of light and hope into a healthcare community that is fearful, stressed, and burdened with everything going on in America right now. We have a chance to practice ‘Love they neighbor as thyself’ on a daily basis. For those who share our common core of religious beliefs, OneShare Health is an excellent option for you to consider. Our desire is to set the gold standard as a health care sharing ministry which lives out the teachings of Jesus Christ.”

About OneShare Health: OneShare Health is an ACA-exempt, nonprofit, Christian Health Care Sharing Ministry (HCSM) based in Irving, Texas, that facilitates the sharing of medical expenses among individuals and families who are united by shared religious beliefs. Healthcare sharing ministries are not health insurance and do not accept risk or make guarantees regarding payment of bills submitted by members.

No guarantees? Well, OK. New Hampshire is one of several states that have issued words of caution about this ministry. They are a member of the Better Business Bureau, which has heard from customers. The Wall Street Journal has also talked about health care-sharing religious groups. And here’s a more recent report on the burgeoning business in the New York Times.

One other little Arkansas connection.

Take a look at a piece of legislation passed in 2013 to “EXEMPT HEALTH CARE SHARING MINISTRIES FROM THE INSURANCE LAWS OF ARKANSAS.” Senate sponsor: Jon Woods. He lives now within an easy half-hour commute of the Irving, Texas, home of Allen Kerr’s new employer. Alas, he’s not free to motor over. His home is a federal prison in Fort Worth. He’s doing a 15-year stretch, presuming he doesn’t win a pardon for being the first Arkansas legislator to endorse Donald Trump, in a kickback scheme with a health care provider (not related to OneShare and not a health care sharing ministry.) Sen. Kim Hammer, then in the House, was the other sponsor.