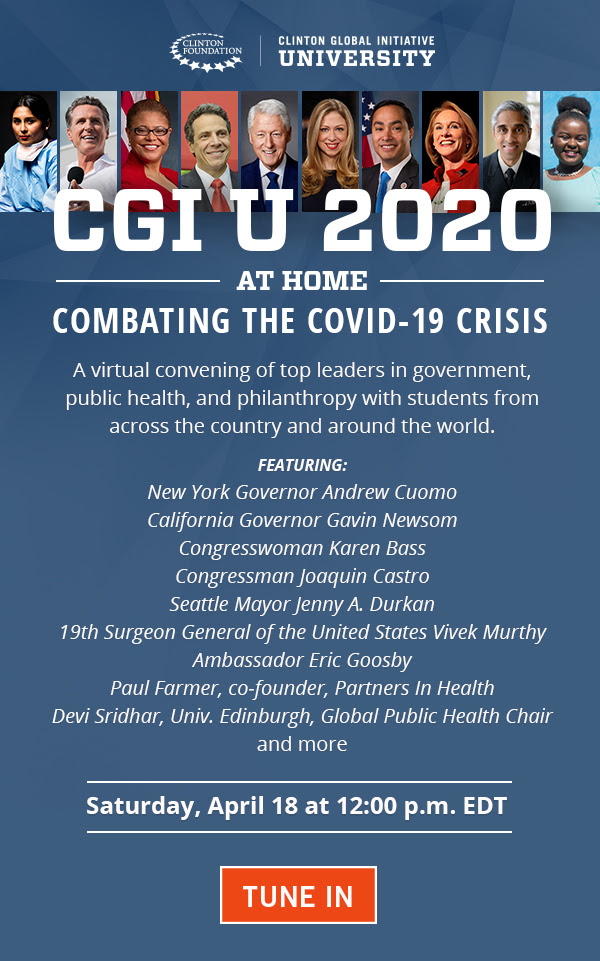 Bill Clinton, Chelsea Clinton and a slate of governors, members of Congress and mayor and others who aren’t likely to begin their remarks with Mike Pence-like praise of Donald Trump have scheduled this on-line session on coronavirus today. Might be interesting.

Topic A should be testing and the states’ ability to do the job with insufficient federal help.

For example, here’s an article this week related to Trump’s criticism of the World Health Organization. It quotes one of the speakers, Eric Goosby, about the WHO’s position not to recommend travel or trade restrictions.

Eric Goosby, professor health at the University of California San Francisco and former U.S. global AIDS coordinator, said the research backs up WHO’s policy. There’s no proof that closing borders works against viruses. Worse, he said, they can be counterproductive.

“There’s a risk with travel bans of domino effects that don’t help fight the outbreak,” Goosby said. “And other steps, like testing, do more to help countries respond and contain an infectious disease.

The porous U.S. ban on China travel that saw infected travelers arrive on both coasts from China and Europe and the federal government’s failure to begin massive testing, tracing and quarantining are at least anecdotal support for that point of view.

Interesting interview here with Paul Farmer, a Harvard medical professor and epidemic expert who’s focused on helping countries without the resources of the U.S.

And here, in The Atlantic, comments from Devi Sridhar.

It’s a comment in the course of an article that says a quick return to business as usual is ill-advised. Ed Yong wrote:

As I wrote last month, the only viable endgame is to play whack-a-mole with the coronavirus, suppressing it until a vaccine can be produced. With luck, that will take 18 to 24 months. During that time, new outbreaks will probably arise. Much about that period is unclear, but the dozens of experts whom I have interviewed agree that life as most people knew it cannot fully return. “I think people haven’t understood that this isn’t about the next couple of weeks,” said Michael Osterholm, an infectious-disease epidemiologist at the University of Minnesota. “This is about the next two years.”

The pandemic is not a hurricane or a wildfire. It is not comparable to Pearl Harbor or 9/11. Such disasters are confined in time and space. The SARS-CoV-2 virus will linger through the year and across the world. “Everyone wants to know when this will end,” said Devi Sridhar, a public-health expert at the University of Edinburgh. “That’s not the right question. The right question is: How do we continue?”