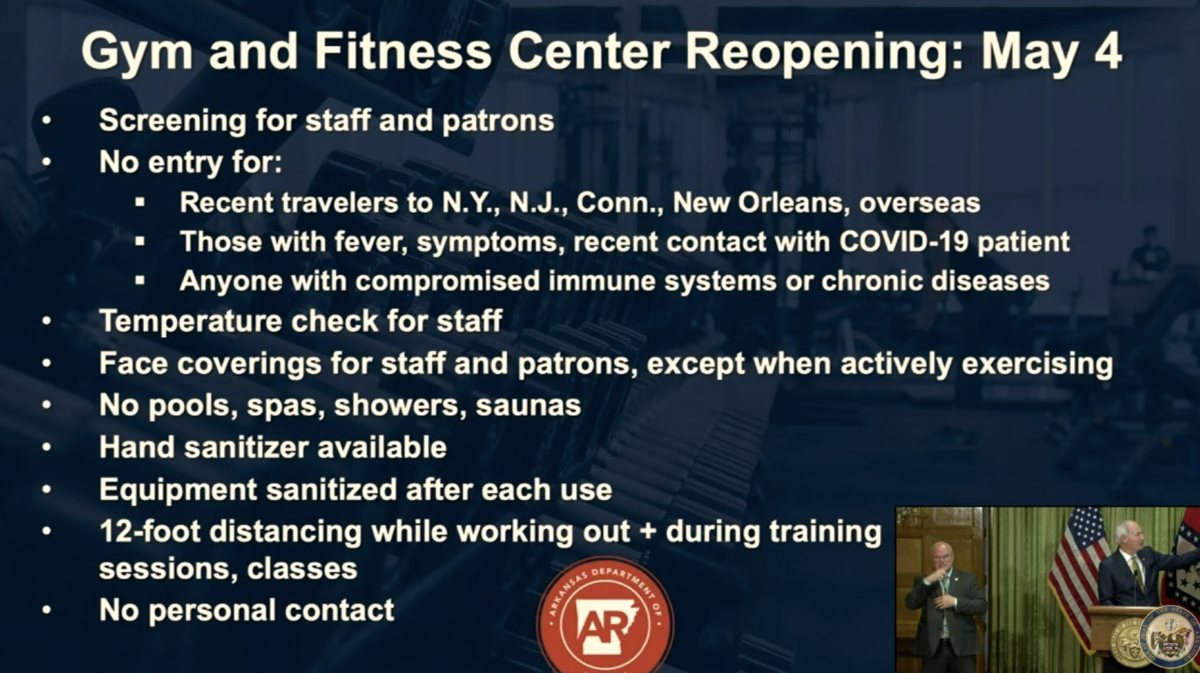 Also news was questioning that put Hutchinson on the hot seat. Under questioning, he confirmed there was a premature rollout of the website for a $15 million grant program to pay small business reopening costs and he indicated that corporate lobby groups knew about in advance. The money was gone before 6 p.m. Wednesday before many people in the state could have known about it unless they follow the governor’s YouTube page or select news media. This contradicts messaging the Arkansas Economic Development Commission has been giving me today.

Back to gyms: Users will be screened for health problems and recent travel to virus hot spots. Face coverings will be required for staff and users of the centers, “except when actively exercising.” No pools, showers or saunas will be open. Surfaces are to be sanitized and distancing of 12 feet will be required in workouts and classes.

The governor noted that people exhale more while exercising, so extra spacing is needed. There’s to be no personal contact. So basketball is still a no-go.

The governor brought in Kelly Eichler, his former legal counsel and one of his appointees to the UA Board of Trustees and an owner of Little Rock Athletic Club, to cheer the reopening of gyms and talk at length about the steps her company would take to keep its four facilities safe.

The state isn’t ready to allow teen and youth sports that normally occur in the summer. The state will re-evaluate that situation in late May.

The governor said there was good news in testing, with 2,500 done yesterday, and he continued to say trend lines were encouraging.

Health Director Nate Smith said there’d been a challenge to get testing done in 48 hours, required for resumption of elective surgery that was permitted this week. He said commercial labs had “stepped up” to fill the gap with expanded capacity.

A reporter asked about a conference call Surgeon General Gregory Bledsoe had yesterday with dozens of doctors. They complained the testing limit was impossible to comply with. The governor sidestepped, saying he hoped increased testing capacity would alleviate those concerns. Smith said the same.

The mishandling of the grants program

The governor got nailed in the Q&A session by queries related to our earlier reporting of criticism about the rollout of the $15 million business grant program for businesses to buy protective gear and take other steps to reopen.

Yes, the governor said, the website went up prematurely for about an hour before legislative approval had been given. It shouldn’t have gone up until today, after Legislative Council approval. The AEDC has insisted to me there was no premature rollout. During that first hour, more than 2,000 applications came in, sufficient to take all the money.

Yes, the governor admitted, it’s conventional for the state to give advance notice of such programs to lobby groups such as chambers of commerce, the Hospitality Association, Retail Grocers, the National Federation of Independent Business and others. “That’s the kind of outreach we always do,” Hutchinson said. Unions, advocates for the poor and people without lobbyists aren’t generally a part of this outreach, I’m confident.

The governor acknowledged the “gun was jumped.” He said he took responsibility. But he said this didn’t mean the process was unfair. He put it down to miscommunication among staff. He said most of the businesses that applied had fewer than 50 employees. “It’s really going to the people who were targeted.”

He said more money may be made available and more applications may be taken.

For the record, the official AEDC recitation of events on the grant program:

The program was publicly announced at the Governor’s press briefing on April 29. Secretary Preston directed the public to the AEDC web site and advised that the application would go live that afternoon. Anyone watching the briefing had access to this information. Various members of the news media also discussed this in their social media posts.

Beginning at 1:30PM, the AEDC web site provided a summary of the program and notified visitors to return to the web site beginning at 5:00PM to apply. No applications – paper or electronic – were received prior to 5:00PM.

At 3:00PM Secretary Preston hosted a teleconference with 100 local economic development officials from throughout the state to describe the program and answer questions. They were asked to help get the word out and told that applications could be submitted beginning at 5 PM.

At 5 PM the system went live and applications commenced. Each application was electronically date and time stamped automatically by the application system. The first applicant, from Garland County, submitted its application at 5:04PM.