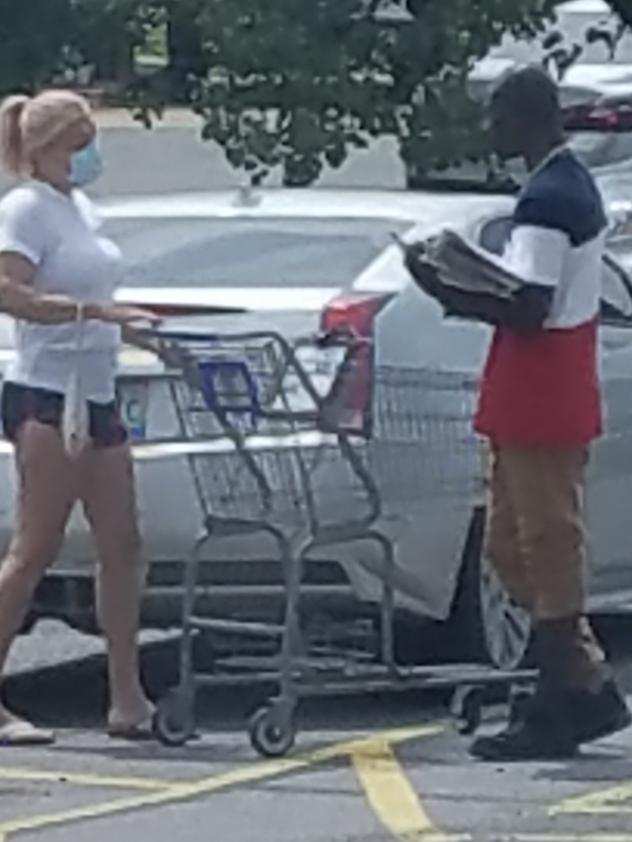 CANVASSING: A group opposing the casino amendment provided a photo of one of the canvassers at work on a parking lot.

July 3 is the statutory deadline to submit signatures on petitions to qualify initiated acts and constitutional amendments for the November ballot, but since Friday is a state holiday, the deadline will be Monday.

July 4, when crowds traditionally gather for community celebrations, is often a good time for signature gathering. But that was before coronavirus. It’s hard to keep a distance from someone seeking your signature.

There are, however, no limits on canvassing in Arkansas under state virus guidelines, only suggestions that people keep their distance or wear masks if they can’t.

A group working to fight a proposal that would allow 16 casinos in Arkansas to be owned by so-far shadowy private enterprises says it has traced a private flight of 35 paid canvassers into Little Rock this week to make a push for the casino amendment. They believe the flight originated in Arizona, currently a hotspot for COVID-19. Arkansas, however, has no bar on travelers from other states. Nor has it a rule requiring canvassers to wear masks.

Who is Arkansas Wins 2020, which is pushing the 16-casino plan? Good question. Doug Meyer is listed as chair in the paperwork filed last week, with an address at rented office space on Gaines Street. The group so far has reported a contribution of $150,000 from 8660 W Irlo Bronson LLC in Kissimmee, Fla. That name matches the address for a hotel, Champions World Resort, which was bought a few years ago by Chicago investor Rob Jarvis, who’s also listed as manager of the Bronson LLC on Florida records.

Keeping watch on the casino push is Protect AR Communities, which raised $400,000 in equal amounts from the three casinos in Arkansas — Southland, Oaklawn and Saracen. It naturally opposes casino expansion in the state beyond current law.

Also in the field are unrelated petitions for good government — the Arkansas Voters First drive to pass a constitutional amendment that would establish a nonpartisan commission to draw legislative and congressional districts following the census. They have the deep pockets of a wealthy Texas progressive to draw on ($1.8 million at last report) and have said petitioning is going well despite coronavirus restrictions and an appellate court reversal of a lower court’s ruling that would have lifted some of Arkansas’s strict petition gathering requirements. They are using paid canvassers, as is the casino group.

Some other petition drives — for legal marijuana and legalizing “amusement” machines — have fallen by the wayside.

Both the casino and redistricting proposals are constitutional amendments. They must gather more than 89,000 signatures of registered voters, with significant numbers from 15 counties, to qualify for the ballot.

Voters First, by the way, has drive-up and sign locations at seven places Friday and Saturday.