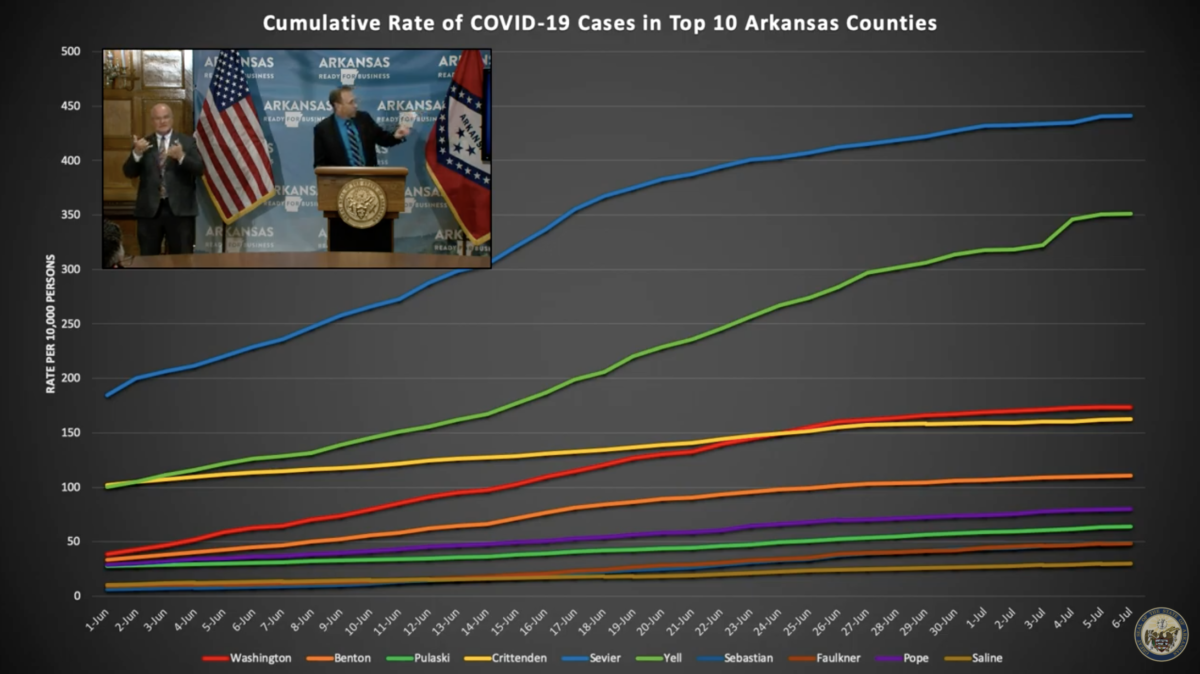 Governor Hutchinson announced a big jump in new COVID-19 cases today. He said the rise seems most likely explained by normal community activities and people not being careful. He continues to insist there’s no obvious tie to opened up businesses such as restaurants and bars.

Health Director Nate Smith said the same, that it can’t be tied to a nursing home, prison or specific workplace.

The Q&A session revealed a summer camp in Arkansas, Camp Ozark in Mount Ida, had shut down operations today because of positive testing of an undisclosed number of campers and staff.

Total tests completed: 4,567. That suggests a high positive rate and results also reflect a spread to new areas. “It’s a significant alert” to new counties on the list that no one is immune and “we have to be careful,” the governor said.

The governor announced an expanded state testing effort in Washington County in response to complaints about long waiting times in that area.

The governor brought in Steuart Walton, the billionaire heir to the Walton fortune who heads Hutchinson’s economic recovery task force to talk about a poll Walton paid for.

The poll was done by Gilmore Strategies, a consulting firm led by former employees and campaign fund-raisers for Hutchinson. Hutchinson revealed some of the results last week, including a claim that 82 percent of people surveyed said they were wearing masks in public, a result that drew wide derision. I also questioned the propriety of the governor being able to draw on a wealthy supporter to do polling he uses in his political presentations. Isn’t that a gift of some value?

The survey was done by the Chair of the Governor’s Economic Recovery Task Force. The results were shared with the Governor and he asked if he could share those results publicly. There is nothing political about reminding Arkansans of the importance of wearing a mask in public places and working to increase education and awareness during this public health emergency.

Walton ran through the 82 percent response on masking again today and a question that showed older people are more likely to comply. Hutchinson said later that he thought the answer reflected that people have masks and use them some of the time, but it doesn’t mean 82 percent of the people are wearing masks 100 percent of the time.

Walton also showed results that indicated majority concerns about attending mass attendance events, such as sports in the fall. 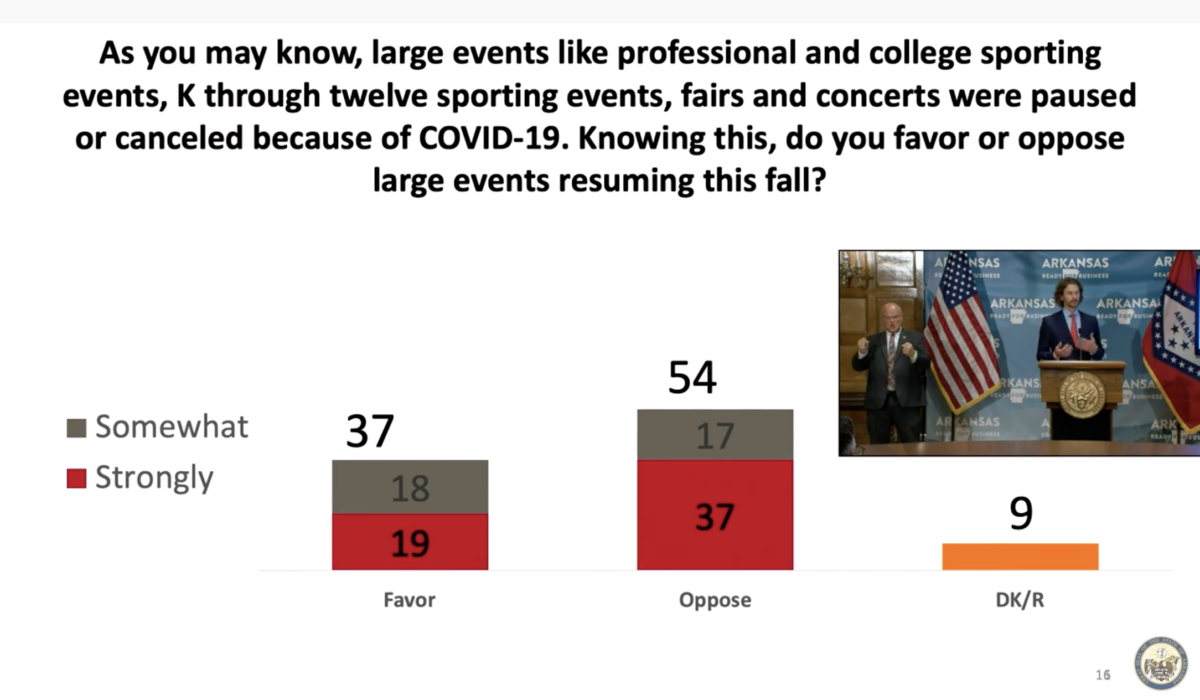 And Walton said a question that showed 59 percent were likely to send their children back to school needed to be considered against what would likely be a much higher percentage in a non-COVID environment. 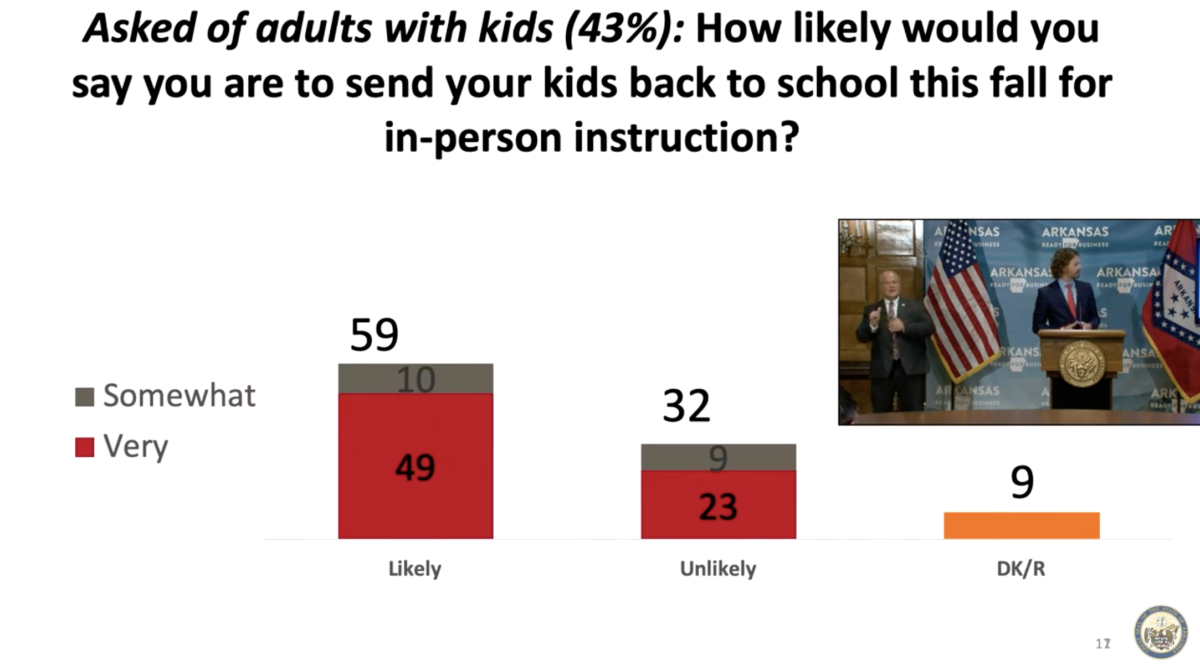 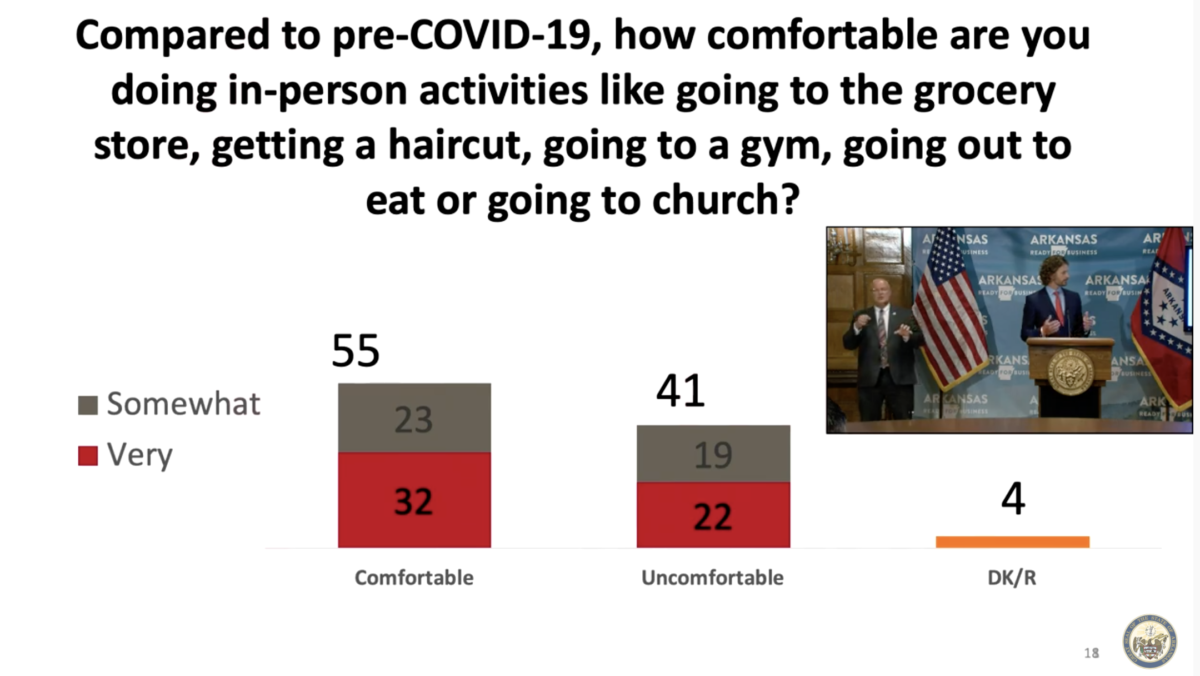 There was also a question on how well respondents believed workplaces were complying with health guidelines. 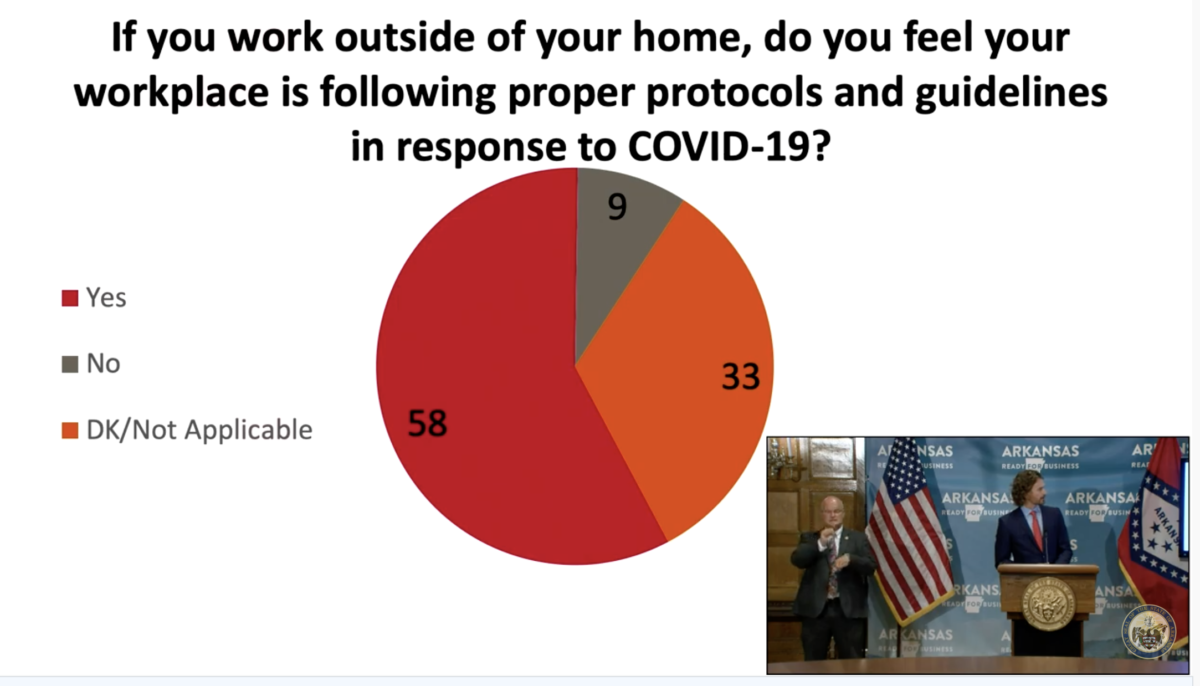 Walton said the information will be posted online. He said he was “really encouraged” by the findings. I am less encouraged.  A  good half of the people of Arkansas have deep concerns about the safety of resumption of normal activities and a goodly number of that other half are likely among the many I see who aren’t wearing masks.

The governor was asked about Donald Trump’s threat to withhold federal money if schools don’t open in the normal fashion. He said it was “consistent” with what he’s been saying. School will start, but with both classroom and online instruction as needed. He said the responsibility was on the state and it will make the judgments as necessary on school operation.

He was asked about only encouraging the use of masks against the UAMS prediction of 150,000 actives cases by October. Hutchinson said modeling numbers change. But he also said the state has the hospital capacity to cover that projected number of cases. He said there’s been a flattening of original projections, showing people are responding.

Have there been outbreaks at summer camps in Arkansas? Some campers and counselors were sent home from Camp Ozark at Mount Ida, which has now decided to shut down, Smith said. “We support that decision,” he added. The extent of the outbreak wasn’t revealed, but the camp has posted this on YouTube, saying it closed “out of an abundance of caution” and announcing closing ceremonies this morning.

UPDATE: Health officials told Leslie Newell Peacock that three people tested positive and were sent home. They were from out of state and are not counted in state totals.