A GOOD FIT FOR WAR MEMORIAL PARK: This is a Topgolf photo of its outlet in Rogers.

Rock City Eats scored a big scoop yesterday with news that the city of Little Rock had put out a request for proposals July 1, with a bid opening July 22, on a “golf entertainment” venue on 18 acres of what was once part of the now-closed golf course in War Memorial Park.

The RFP, which you can read here, is tailored to Topgolf, a bar/restaurant/high-tech driving range chain that is enjoying some popularity with millennials, whom Mayor Frank Scott Jr. would like to reach in his re-election campaign.

Scott has been touting Topgolf for months.

The RFP from the city for a lease of parkland comes as a surprise to many, including at least some members of the City Board of Directors. It will be controversial to give a private developer prime parkland, which was promised to be redeveloped for general recreational use. (The RFP declares this bar/entertainment venue will be park use.) I’m trying to reach members of the advisory group appointed to come up with uses for the closed War Memorial and Hindman golf courses to see if they had a heads-up on this plan. (UPDATE: They didn’t.)

Dallas-based Topgolf has an outlet in Rogers. There was no public involvement there. Topgolf leased 11 acres from Hunt Ventures.

Topgolf proposals have been controversial. The mayor of Albuquerque’s veto was overridden on a deal there that included tax abatement and other incentives worth $2.6 million in taxpayer help. The mayor called it a “raw deal” for taxpayers that would bring low-wage, low-skill jobs and send the wrong signal that the city is prioritizing out-of-state companies.

Topgolf also won a package of taxpayer cash giveaways in Birmingham, but the deal was terminated when the company failed to meet promises on hiring minority and women contractors. El Segundo, Calif., walked away from a Topgolf deal unhappy with terms the company had given another city.

A lease on this land is valuable. The land immediately west across University Avenue, once occupied by a Sears, sold for $15 a square foot but is now assessed at appraisals from $24 to $29 a square foot. Even at $15 a square foot, 18 acres is worth more than $11 million. It’s worth an incalculable amount to people of the city for walking, biking, birding, soccer, picnics and lots more in what was once envisioned as the city’s Central Park, not a late-night drinkery with lighted driving range. The site would be the southwest portion of the park, bordered by I-630 and University Avenue.

War Memorial Park encompasses 200 acres, but a significant portion is devoted to a football stadium and parking lots used weekdays by employees of UAMS and other state agencies nearby. Taking 18 acres for a private entertainment venue would be an erosion of well more than 10 percent of actual parkland.

War Memorial’s use has been studied endlessly, including by a private consultant mentioned here. Private developers have eyed the property greedily for years, but this proposal, arising with scant notice and no general public announcement, appears to be as close as any of those designs have come to reality.

Judging from social media reaction to the news last night, it will not be universally cheered.

Three members of the advisory group the mayor appointed to talk about reuse of War Memorial Park said no one had ever mentioned this idea to them and they were “disappointed” to learn about it. One of them, Bryan Day, a former parks director, said he’s long opposed conversion of public parkland to commercial use.

I’ve submitted several questions to the mayor’s office about this, including the lack of public notice and whether it’s the mayor’s view he can do this deal without City Board approval.

Topgolf is welcome in Little Rock. But not at the cost of losing general public access to a major chunk of a city park perched between prosperous and poorer neighborhoods. Let it pay fair market costs as other businesses in Little Rock do and leave our parks alone.

Topgolf builds a variety of facilities, generally depending on size of market. Some of their driving ranges have up to three levels. In Waco, they are building a “backyard-style” facility in return for some $5 million in taxpayer incentives.

UPDATE: City Director Capi Peck, liaison to the Parks and Recreation Commission, said she was blindsided by the proposal and is adamantly opposed. She said no one on the commission she’d talked with was aware of it.

Can the mayor push this through without city board approval, which Peck thinks would be unlikely? I don’t know. But I do know people are already talking about an initiated ordinance to block it, as was done with a famously stupid city development idea years ago to turn Rebsamen Park Road into a speedway escape route from the city with a new bridge over Jimerson Creek. The plan was defeated. It  would have prevented all the subsequent riverside park development.

Jesse Gibson, chair of the Parks Commission, sent me this comment:

Unfortunately with the pandemic, board and commission meetings have been suspended, so we have not had a meeting since our March meeting. But the Commission was not consulted about Top Golf or the RFP. Our Commission had quite a few meetings about the usage of War Memorial, and I presented our consensus to the Board in January. That consensus did not include Top Golf, and in fact discouraged commercial activities save for limited offerings that were in spirit with the outdoor nature of the park. This was news to me, and I predict we will discuss it at length when we are allowed to meet again.

PS: The city is busy looking for all kinds of consulting input. Check out the pending list on the city website: 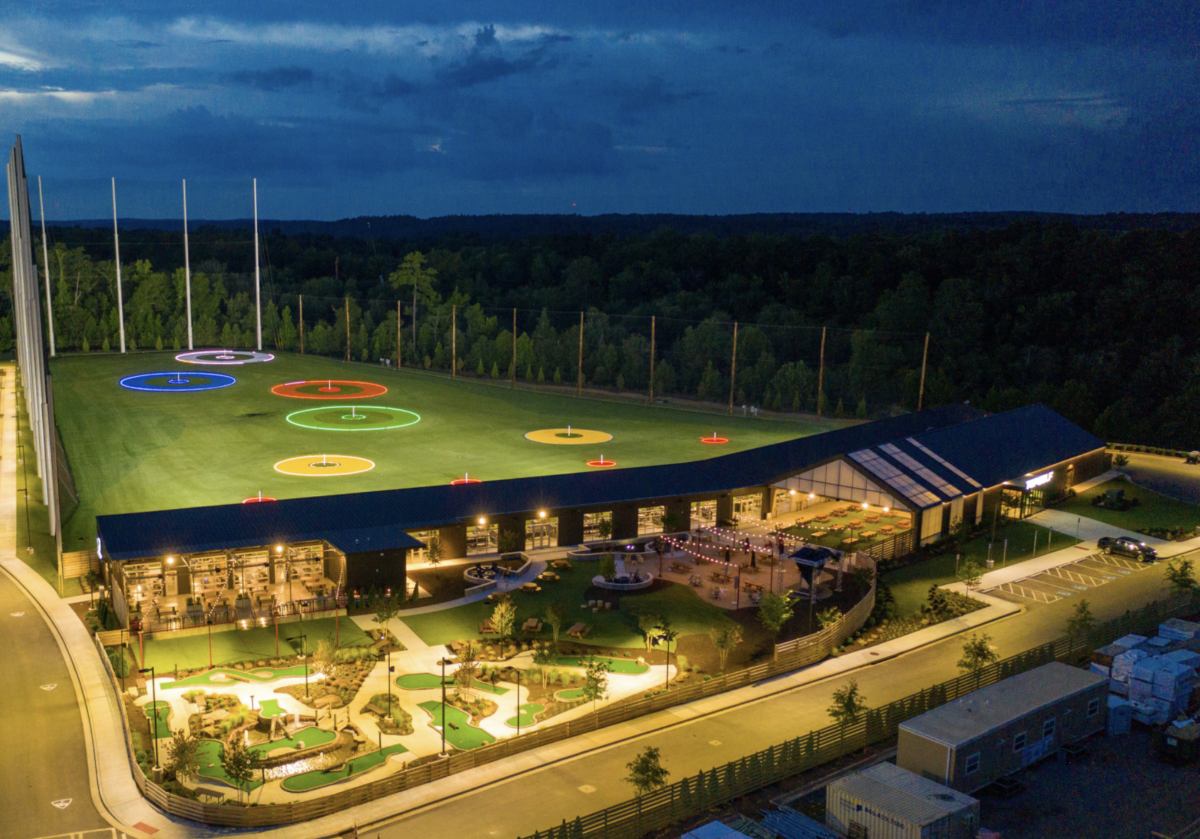 IN AUGUSTA: A Topgolf image of one-level driving range.