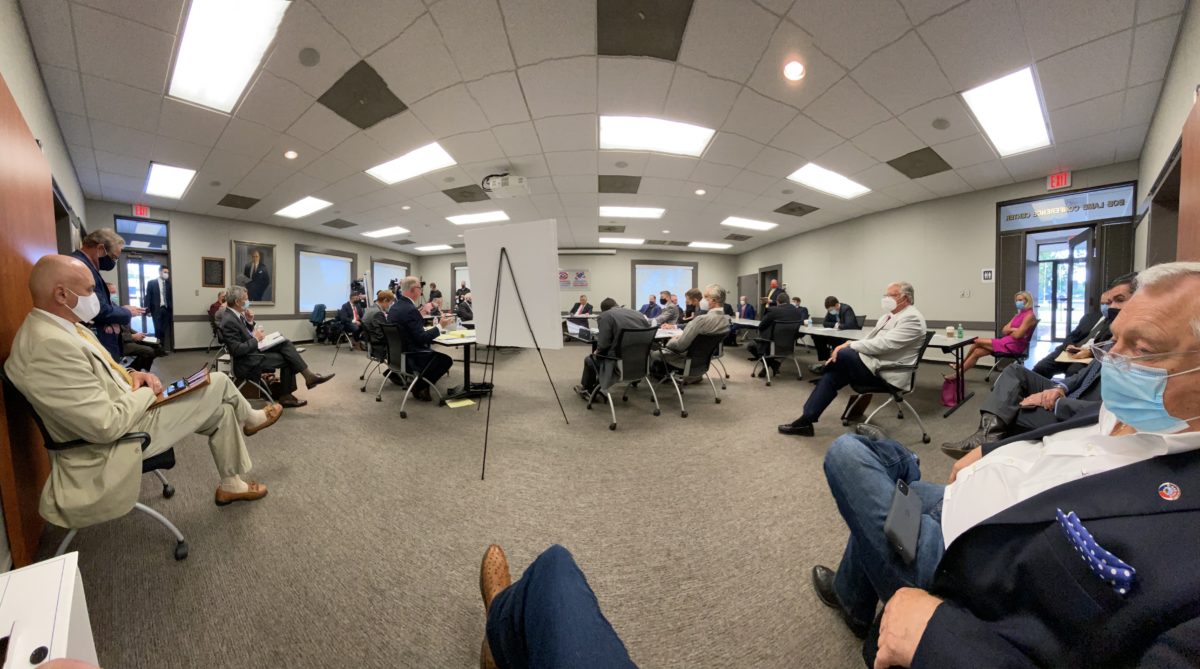 UPDATE: The Arkansas Racing Commission today voted 3-2 in favor of Gulfside Casino Partnership of Mississippi receiving a permit to operate a casino in Pope County.

This will trigger further court action.

“We appreciate the Racing Commission¹s thoughtful decision and continued
support and look forward to breaking ground on our first-class casino
resort, which we believe will be an economic winner for Russellville, Pope
County and Arkansas.”

From the Cherokee Nation/Legends side:

“The Commission entered the full report of its consultant affirming that Legends is the superior applicant on all grading criteria, and we brought a mountain of proof that Mr. Green had made many misleading and inaccurate statements about their experience, finances and Pope County project. Then, Mr. Green admitted that his past financial and legal problems made him ineligible for four years to even hold a gaming license in Mississippi. Yet, the Commission declined to re-score the applications, denied our appeal by a 3-2 vote, and gave Gulfside the license in spite of everything. It will take me a while to wrap my head around that.” – Dustin McDaniel, legal counsel for Cherokee Nation Businesses

The Arkansas Racing Commission is to decide today what to do about competing applications for a casino permit in Pope County.

The applicants are Gulfside Casino Partnership of Mississippi and Cherokee Nation Businesses of Oklahoma.

It’s a much-litigated, much-disputed issue. A scoring by commissioners favored Gulfside. The fairness of the scoring has been challenged. A casino consultant paid $150,000 to devise the scoring system favored the Cherokee application.

Whatever happens, legal controversy awaits. Opponents to ANY casino in Pope County went back to Pulaski Circuit Court today for an injunction against the Commission awarding a permit under its existing rules. The argument is that the commission must adopt new rules because of past court rulings. A letter about the issue also lists various controversies, including private meetings by local officials before cutting a deal with the Cherokees and recent allegations concerning a JP who voted for the deal and lost a re-election bid as a result.

Dustin McDaniel, attorney for the Cherokees, presented an extensive argument attacking the record of Gulfside’s owners, both in participating in a cruise ship casino in Texas and other activities. He challenged their ability to deliver on financing for the expanded resort hotel they outlined when applications were scored. Should it get the casino permit, he said he’ll appeal the decision in court. He argues that the Gulfside application, amended on the fly, was so flawed that the commission shouldn’t be bound by its scoring and should reverse its award of the permit.

Gulfside continues to argue it is the only valid permit applicant on the strength of being the only applicant that submitted a proposal with approval from local officials during the initial application period. Those local officials were no longer in office and the application was rejected because rules then required support from current officials. A judge held that rule unconstitutional. So now here we are, with many court pleadings pending. Commission Chairman Alex Lieblong is not participating because of communications he’d had with McDaniel. Butch Rice, a commissioner whose scoring was judged biased by other commissioners, also is not participating.

Gulfside’s attorney, Casey Castleberry, disputed McDaniel’s assertion that Guflside owners had given false answers about their business past, particularly involvement with a company that filed bankruptcy. Gulfside’s owners worked for that company, but were minority owners, they have said.

Commissioner Bo Hunter of Fort Smith moved to deny the Cherokees’ appeal and award the permit to Gulfside He said he believed they hadn’t met the burden of proof to demonstrate Gulfside had misled the commission.  Michael Post of Altus seconded the motion and it was approved on a 3-2 vote, with  Acting Chair Mark Lamberth of Batesville and Steve Landers of Little Rock voting no. The other aye was Denny East of Marion.

Following the vote, Lamberth urged the commission to discuss rescoring the applications. “We want to get this right.” He noted that the Commission hadn’t scored applications before hearing from the outside consultant, who’d been paid $150,000 and who, it was ultimately disclosed, favored the Cherokees in all four areas of scoring. Landers asked why pay someone $150,000 if they’re not going to listen to him.

Bowen of the attorney general’s office said a motion to rescore probably should have preceded the vote to deny the Cherokees’ appeal. But he said they could consider such a motion. No such motion was made.