Hurricane Laura commanded top attention at the governor’s daily coronavirus briefing on account of the emergency declared in Arkansas as the now-tropical storm approaches the state.

The National Weather Service said the tropical storm warning issued for Arkansas is a  first for the state. The definition is a system with sustained winds of 39 to 73 mph. Trees and power lines spell trouble.

The governor reported at 1:30 p.m. that 22,000 were already without power and trees were down in Camden. National Guard teams that work in high water rescue have been deployed to South Arkansas.

“Pay attention to the weather,” the governor said, in warning of flash flooding and strong winds. Turn around at barricades.

Hutchinson said Donald Trump had talked with him by phone and expressed his concern.

COVID-19 news is another bad day for new cases and the news that public schools currently have more than 200 active cases of COVID-19.

The governor’s always questionable numbers today: Arkansas added 722 new cases in the last 24 hours, for a total of 58,745. Hospitalizations (a number the feds have questioned) fell by 2 to 433. Deaths increased by 7 to 739 (a number that also may be understated).

Tests in the last 24 hours: 6,682. The positive rate is still roughly above 10 percent. Hutchinson continues to depict 10 percent as the desired standard though it is double what experts say is the danger level of 5 percent.

Hutchinson said he hoped the increased number of cases was a result of greater testing, as opposed to a trend. But it’s a reminder, he said, “there’s risk out there.”

SCHOOLS: The state said it was now prepared to release specific data on COVID-19 in school districts. It is to be posted on the Health Department website. Districts with fewer than 5 positive cases won’t be listed for privacy reasons.

The governor showed a current summary that indicates 222 current actives cases in public schools and 41 in colleges and universities. The summary also includes all cases to date, including “recoveries.” The report will be released twice a week. Private schools will be included, if they choose. The data will have some lag time, officials said.

The summary currently doesn’t include the number of students and staff quarantined because of exposure to others.

The governor said he thought the number of school cases was “very modest” given 480,000 school students. “It’s no surprise at all,” he said. But he said this was a number that really represents the situation before school started. “We’ll be able to measure from that two weeks from now.” He said he expected that number to go up, “But we will see.”

He said parents shouldn’t overreact simply because of the presence of cases. They should check the details deeply and see if a good response is being taken.

Education Secretary Johnny Key said the latest data showed 13 districts in geographic areas with 50 or more cases per 10,000 people, the worst category, down from 19. 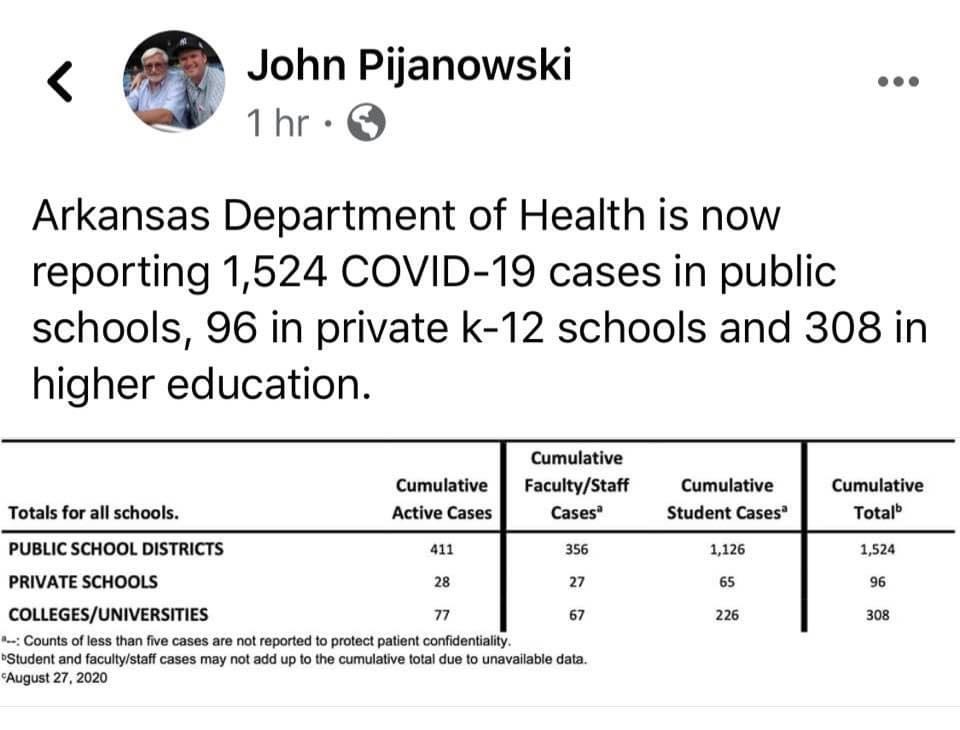 TESTS FOR ASYMPTOMATIC: Though the CDC has said such tests need not be performed on asymptomatic people exposed to others, Romero noted that the CDC says states could choose to enforce stricter guidelines and Arkansas will continue to do so. In response to a question, the governor acknowledged confusion could arise from different state and federal guidelines. But he said the state wanted to continue more testing “at least until we get a good handle on this.”