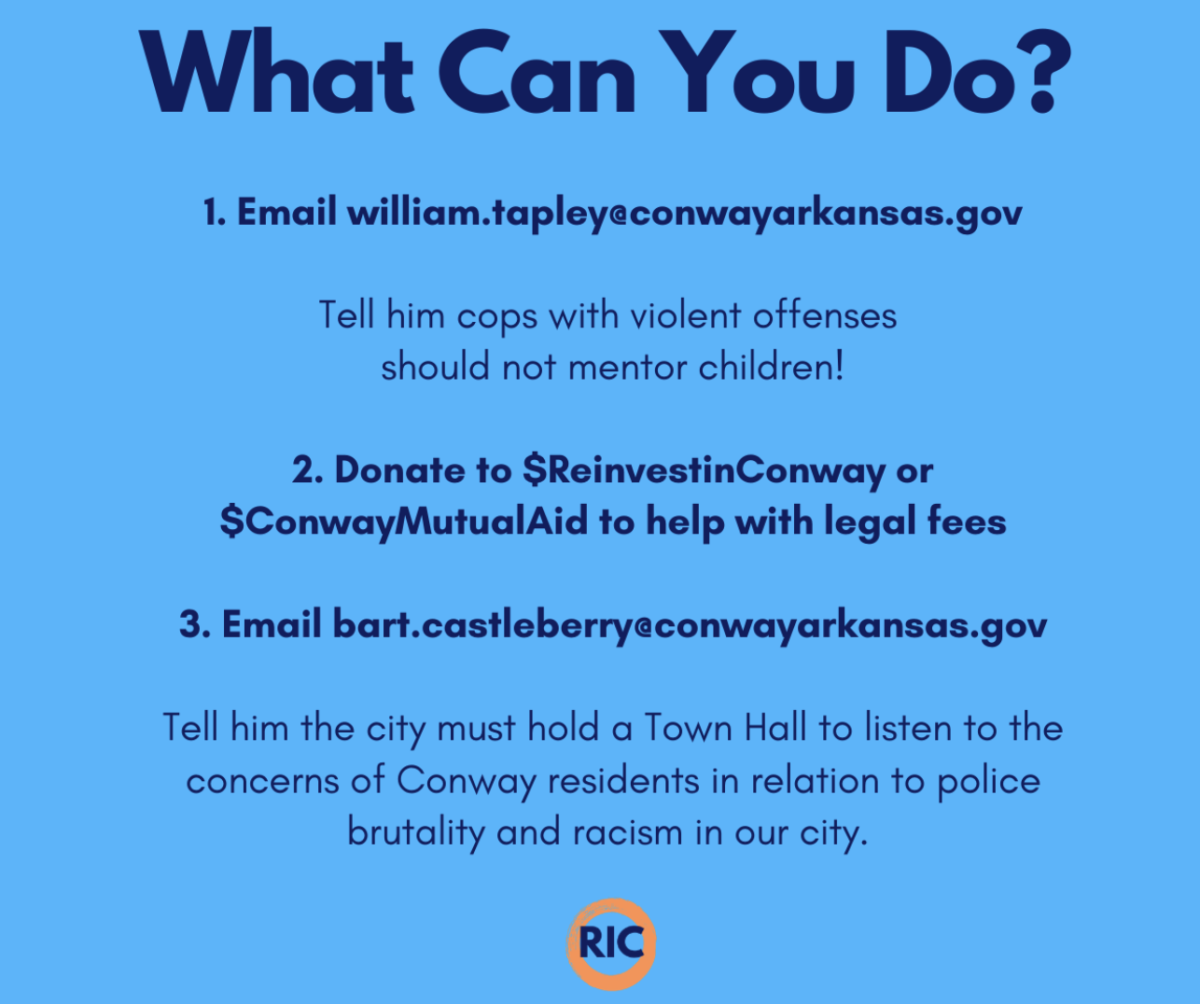 Conway doesn’t take kindly to criticism of its police.

I wrote earlier this week about Mayor Bart Castleberry’s refusal to give City Council time to a grassroots group, Reinvest in Conway, seeking better police procedures. The group formed following the death at police hands of a black man, Lionel Morris, suspected of shoplifting an item in a Conway grocery. He was Tased and restrained by officers’ knees and feet while saying he couldn’t breathe. He died en route to a hospital. Officers were cleared of criminal culpability by the prosecutor.

Yesterday, some Black Lives Matter demonstrators were arrested in front of the Conway Police Department. A Facebook post from Reinvest in Conway said a group went to the police department to protest the court-directed mentoring of a young black male by a police officer. By the group’s account, the boy has mental health needs. The court ordered mentoring by a police officer. The group claimed the officer was one of those involved in the death of the suspected shoplifter. The group said the mother was threatened with contempt of court when she appealed the choice of mentor and also for wearing a Black Lives Matter shirt in the courthouse.

During today’s protest, 3 individuals were arrested for “criminal trespassing” and “failure to comply”. There was no justification given of how they were trespassing.

“Because I said so” is not a valid reason to choke someone. [An apparent reference to one officer, as depicted in video, physically taking down a sign-holding woman.)

This is just another example of CPD misusing force and abusing their power against peaceful protestors.

The group also has posted video of the arrests outside the police building. It appears officers said demonstrators were too close to the police building and should have been on a sidewalk on the other side of a low wall between the sidewalk and an entrance plaza. An officer can be heard stating a reason for the arrest was that police standby,  “obstructing governmental operations.”

I’ve asked the Conway police for information on the arrest and specifically for their definition of private property in that area.

This is all they’ve said publicly so far:

Reinvest in Conway commented, however:

Let us be clear. There is no justification for this kind of force for standing on a sign that is a foot off the ground.

The Conway Police Department was solely exercising their power and authority over peaceful protesters. This is intimidation. Not public safety. This is reflective of a culture that values police over individual lives and the First Amendment.

People protesting the role of violent police in our community is met with police violence.

Here’s a video prior to the arrests.

I’ve had two calls from Conway residents this morning defending police in response to my earlier item about the mayor. One said they didn’t want Conway turning into Little Rock, which is where I ended the call. The First Amendment, at least, still lives in Little Rock.