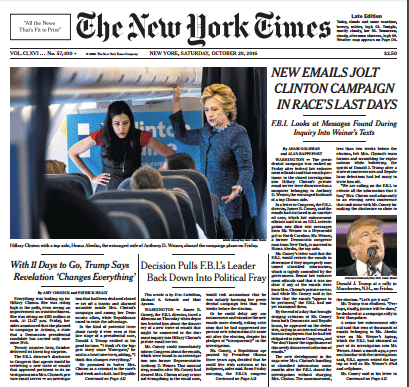 This was in the New York Times today:

President Trump declined an opportunity on Wednesday to endorse a peaceful transfer of power after the November election, renewing his baseless warnings about extensive voting fraud before saying there would be no power transfer at all.

Asked whether he would “commit here today for a peaceful transferral of power after the November election,” Mr. Trump demurred, passing on a chance to call for a calm and orderly election process.

“We’re going to have to see what happens,” he told a reporter during a news conference at the White House.

This remarkable utterance was displayed on page 15A of what some view as the country’s leading newspaper. Page 15.

This inevitably takes us back to a critical event in Trump’s defeat of Hillary Clinton in 2016. That amazing Page One.

“The American people will decide this election. And the United States government is perfectly capable of escorting trespassers out of the White House.”