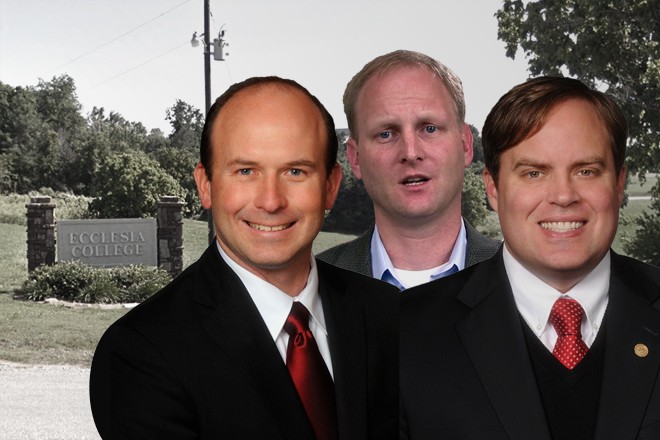 The three-judge panel agreed in rejecting arguments of government misconduct because of FBI agent’s destruction of data on a laptop computer.

In sum, the opinion held that this argument had already been rejected in appeals by another defendant in the scheme for Ecclesia College to pay kickbacks to Wood and Shelton of $600,000 in state money shipped to the college. College president Oren Paris III also was convicted. He pleaded guilty shortly before he was to be tried with Shelton and Woods.  Former Republican state Rep. Micah Neal pleaded guilty to joining Woods in bribery/kickback schemes, which also touched on the sprawling Preferred Family Healthcare scandal.

It says the evidence was “overwhelming” and detailed the payments to Woods, Shelton and Neal. It also recounts how Woods cooperate for a time, then stopped. Neal, by then cooperating, recorded conversations he had with Woods. It delves at some length with the FBI agent’s wiping of the laptop to remove personal information he had there and the failure of anyone to demonstrate a plausible scenario by which information not otherwise available had been deleted related to the cause

He can ask for a review by the entire court and also attempt an appeal to the U.S. Supreme Court.

Paris got a three-year sentence and has been released to home detention to complete the term. Shelton is being held in a Beaumont, Texas, prison, with a release date on his six-year term in 2023. Micah Neal completed his home confinement sentence, a brief term because he was the first to the courthouse to cooperate in the investigation.

Woods was the first legislator to endorse Donald Trump’s candidacy in 2016. Trump, through the intervention of Republican politicianas such as Mike Huckabee and Bud Cummins, Trump’s Arkansas campaign manager, cut short the prison time of Ted Suhl, convicted of a Medicaid-related bribery scheme. Also awaiting sentencing for a bribery-kickback scheme is former Republican Sen. Jeremy Hutchinson. Before he pleaded guilty, Cummins was raising money for Hutchinson’s legal defense.

So the matter of a presidential pardon might remain on the table, but Woods fought his case to the end, a likely factor in his stiff sentence.