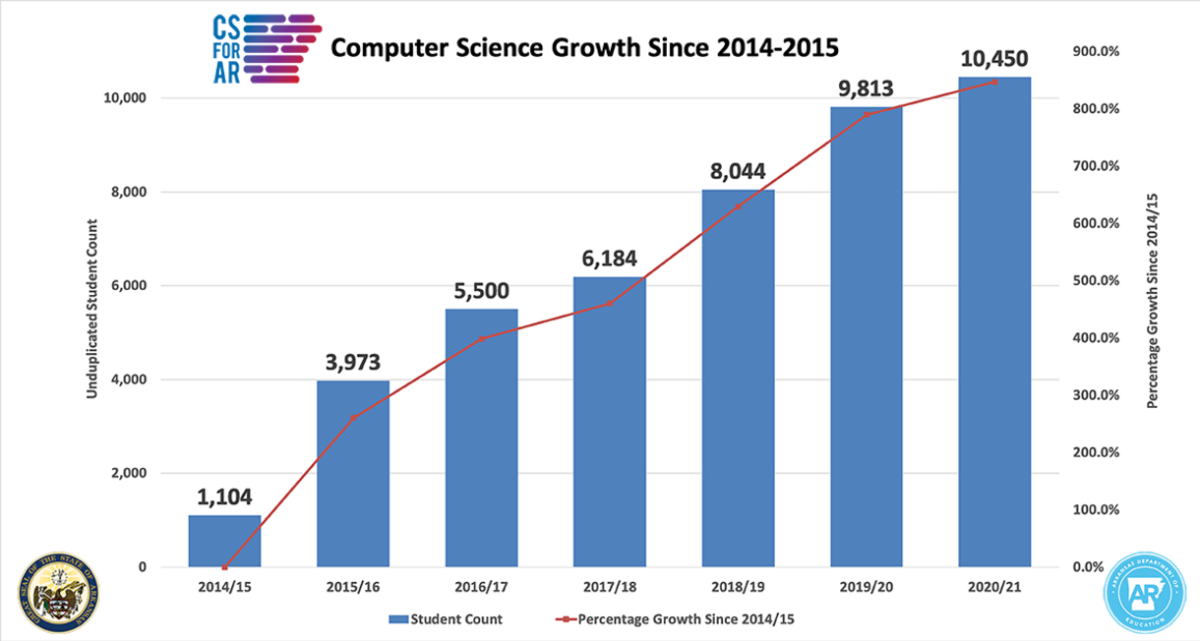 Governor Hutchinson said the push to teach computer science in Arkansas is having results, with more than 10,000 students enrolled this school year.

Enrollment in Computer Science courses topped 10,000 for this school term, a record number of students that is an increase of 6.5 percent over the previous year and an 847 percent increase since the 2014-2015 term, Governor Asa Hutchinson announced at a news conference today.
The enrollment numbers were taken from Arkansas school districts’ Cycle 2 enrollment reports, which were due to the Arkansas Department of Education (ADE) by October 15.
The enrollment report shows that for the first time in Arkansas, the percentage of African American students who are taking a computer science class – 19.6 percent – exceeds the percentage of all African American students – 19.2 percent – enrolled in Arkansas high schools.
ADE also reports that the number of girls taking at least one computer science class increased by 283 to 3,135, a 28 percent increase over the past year and a 1,300 percent increase over 2014, when 223 girls were enrolled.
“When we became the first state in the nation to require all high schools to teach computer science, our goal was to increase enrollment to 7,500 by the 2019-2020 school year,” Governor Hutchinson said. “We surpassed that goal a year early, and this year, even with COVID-19, we topped 10,000. Educators and students embraced the initiative. We have enhanced our education system, and we are strengthening our workforce.”
Governor Hutchinson also announced his support for legislation during the 93rd General Assembly that would require a computer science credit to graduate and would require each high school to employ at least one certified computer science teacher. Senator Jane English is sponsoring the bill.
Anthony Owen, State Director of Computer Science, praised the work that led to the sixth consecutive increase in enrollment. “I am proud beyond words that our schools, educators, and students stepped up and again demonstrated that computer science remains a top priority across Arkansas.”