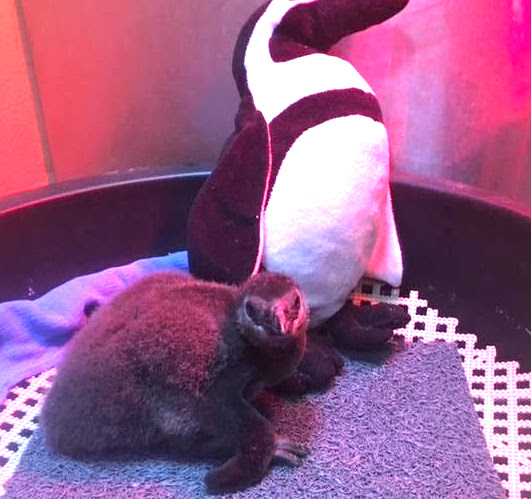 NEW PENGUIN: Gender to be revealed next week.

The Little Rock Zoo announces the birth of an African penguin last month.

The Little Rock Zoo is proud to announce the birth of an African penguin, born to mother Skipper and father Eze on November 2, 2020. The Little Rock Zoo will host a live gender and name reveal on December 16, 2020 at 11am via its Facebook page.

Of the breeding pairs at the Little Rock Zoo, Skipper and Eze are the most successful. They have parented eight (8) of the eleven (11) chicks born at the Little Rock Zoo.  Along with their mother, Skipper, several of the chicks have gone on to become ambassador penguins for the Zoo to the public.

The birth comes at the recommendation of the African Penguin Species Survival Plan® (SSP), a program that cooperatively manages penguin species in zoos accredited by the Association of Zoos and Aquariums (AZA) to further conservation goals. This SSP Program coordinates species conservation, research, husbandry, management and educational initiatives.

Native to countries in the southern part of Africa, including South Africa and Namibia, the African penguin is listed as endangered on the International Union for Conservation of Nature (IUCN) list of threatened species, meaning there is a risk of extinction in the wild.  Their vulnerability is mainly caused by energy production, mining and over use of biological resources (hunting and fishing) in and near their homes. At their last recorded count, the IUCN estimated about eighty-thousand (80,000) African penguins remain in the wild.