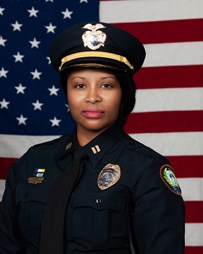 She’s the first Black woman to attain that rank.

An assistant chief position was opened after Alice Fulk retired and took a job as head of state Capitol police. She joined the force in 2006.

She was mentioned in a recent article that I mentioned earlier today as part of ongoing internal divisions in the LRPD.  It was an Arkansas Democrat-Gazette article based on communications between Police Chief Keith Humphrey and then-Assistant Chief Fulk about various members of the command staff.

He said Young-Haskins, captain of the 12th Street Station division, “is the only patrol captain that’s innovative and proactive and doesn’t sell bull.” His messages included disparaging remarks about some other captains. Fulk disagreed with his assessment of Young-Haskins, saying she seemed “overwhelmed.” Fulk is among the members of the force who sued Humphrey over what she contended was a hostile work environment.