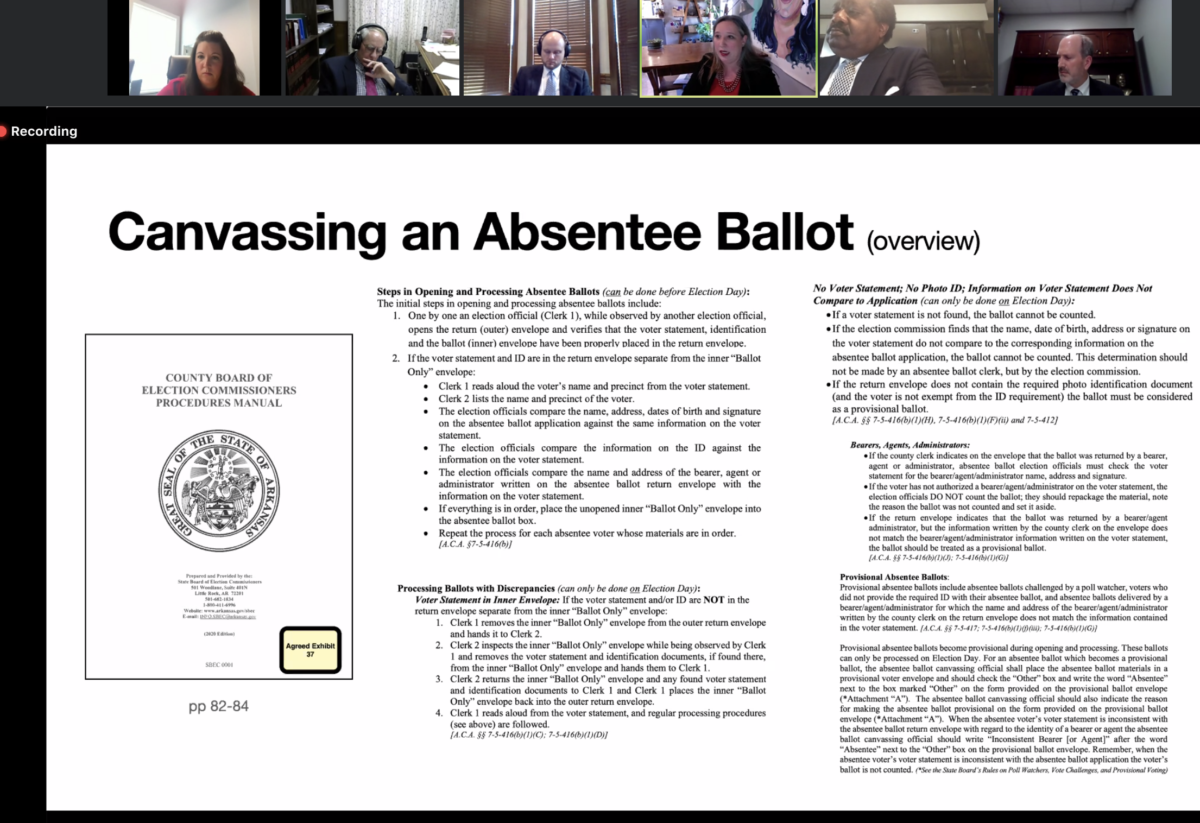 The state Claims Commission today heard Republican Rep. Jim Sorvillo’s challenge of his narrow defeat by Democrat Ashley Hudson in the race for House District 32 and recommended that the House take no action to reverse the result.

UPDATE FROM THIS MORNING: Led by chair Paul Morris’ recommendation, the commission decided that case law said Sorvillo had to demonstrate proof that 27 mistakenly counted ballots changed the outcome of the election and that he had not done so. He could have questioned voters in that group, but declined to do so.

Sorvillo, through his lawyer AJ Kelly,  asked that the Claims Commission recommend to the House that it not seat Hudson and call for a new election. Hudson was certified the winner by 24 votes in a race with more than 16,000 votes, but the outcome was marred by the inclusion in the count of 27 ballots that had been set aside as ineligible for counting because of a mismarked box.

No one knows how those votes were cast, but Kelly argued the error was serious enough to call the election into doubt. He also raised an argument about seven voters who were initially told they were ineligible to vote in a precinct covered by District 32. They had been inaccurately coded by the clerk’s office.

Kelly argued that valid reasons existed for the 27 ballots that were excluded. Hudson’s attorney, Jennifer Waymack Standifer, had several responses to that, the first that the votes were certified and case law precedent says only extraordinary circumstances, such as fraud, can justify a new election.

But she also took issue with reasons the ballots had been set aside for exclusion and said many of them were valid votes that should have been counted. These included votes where a voter ID was included but was not used to verify the voter’s validity (in contravention to the Arkansas Constitution, she argued) or were invalidated for a failure to precisely “match” rather than merely “compare,” as the law requires, on the name, address, birth date and signature. She provided several specific examples — including a voter who left out a digit of his ZIP code in one of three places it was entered; a voter who’d married and whose name had changed but who included her previous name on the ballot application as well as her new name; a 90-year-old retirement village resident who failed to include the room number of her residence, and a mismatched signature by a woman whose husband included a statement saying the signature wouldn’t match because of a medical condition.

Standerfer said the state Board of Election Commission’s own guidelines for vote canvassers urged giving the voter the benefit of the doubt. But she said, “tongue in cheek,” if the Claims Commission was to decide that votes could be disqualified on technical reasons and the Voter ID required by Constitution should be ignored as proof of the validity of a vote in favor of technical “matching,” the evidence presented by Kelly tells the Commission to “burn it down” based on “conjecture.” It must, she said, throw out all elections in which 327 set-aside ballots were counted countywide and where the margin was narrower than the number of invalid votes. This could include four close races for state House, including Republican Rep. Carlton Wing’s 14-vote victory over Democrat Matthew Stallings, she said.

Paul Morris, who’s chairing the three-person body hearing the claim, asked Standerfer what if the 27 votes WERE illegal, or not in compliance with legal requirements. Then, she said, Kelly had to put on evidence that the votes would have altered the outcome. She said the math indicated that was unlikely. If Sorvillo got two votes of the 27, he still loses. She noted that Sorvillo received almost 40 percent of the absentee and provisional ballots that were counted after election day, including the box with the 27 disqualified ballots.  She also said those 27 ballots might include “undervotes,” or ballots in which votes weren’t counted in that race. Furthermore, she said there were still 70 absentee ballots that haven’t been counted in Pulaski County that, on their face, appear to be valid votes by legal voters. If the Claims Commission acts based on the 27, it should review those votes as well, she said.

Kelly offered no allegation of fraud, though he did relate the unhappiness on the part of Republican members of the Election Commission, Evelyn Gomez and Kristi Stahr, with some of the work of staff director Bryan Poe.  Rather, he said, “The issue is voters in the state have the right to expect the majority is entitled to rule and their votes will be counted lawfully and counted and added correctly.”

He argued the Pulaski commission voted to certify after being advised by the county attorney that it had no choice, though individual members had doubts about the validity of some votes.

Standerfer said Kelly had failed to prove the invalid votes that were counted affected the outcome and it was his obligation to do so. He responded that it would violate the voters’ right to privacy of their vote. Standerfer had argued that the Arkansas Supreme Court had ruled this fact-finding was proper in an earlier election challenge. Kelly said that was a case involving illegal votes — votes made invalid not by the voters but by others.

After arguments, Morris asked Kelly about Commissioner Stahr’s testimony that all absentee ballots were suspect. If that’s so, why shouldn’t all election results be questioned, he asked. Kelly said her concerns “merit a policy response,” but Sorvillo doesn’t want to throw out every race. He said, however, there’s no question there was “negligence” on the part of the county clerk’s office and the election commission staff.

The commission broke for lunch shortly before noon. Morris said he was prepared to make a motion when they returned at 1 p.m.

UPDATE: In explaining his reasoning before making a motion the panel approved, Morris said case law indicated Sorvillo had to produce testimony on how the contested votes were cast to show the outcome was changed by the 27 votes. “That has simply not occurred.” He did say it was unquestioned that the 27 votes were counted inadvertently, though ruled invalid by Commission vote.

Morris laid out his reasoning on the case and the law. He said neither statute nor House rules gave guidance on when an election result should be overturned. He acknowledged mistakes had been made in the election counting process. Elections are “run by humans,” he said. “Humans make mistakes.”

But the law assumes the status quo absent proof and Sorvillo didn’t meet it, on either the big question about the 27 votes or some smaller discrepancies his lawyer cited. He also adopted Hudson’s reasoning that it was unlikely Sorvillo got only one vote of the 27. With only two votes in that group for Sorvillo, Hudson still wins, Morris noted. His motion:

We recommend to the House of Representatives that they accept the results of the Pulaski County Election Commission as certified because Sorvillo has not met his burden of proof on these issues.

He also recommended that the House take a long look at the statute on dealing with election challenges that gives the Claims Commission an advisory role in the process. It was its first effort and it faced many questions.

The vote was 3-0 with Dexter Booth and Henry Kinslow joining Morris.

Morris also explicitly said a Sorvillo challenge of seven votes in which voters were initially assigned to the wrong precinct arose after the deadline for filing an election complaint, but said even if it had been timely it was not enough to affect the outcome. He noted that, though it wasn’t conclusive evidence of how the seven would have voted, that their primary voting histories included solid Republican, solid Democratic, a mixed record and a voter who had never voted in a party primary.

Republican Rep. Austin McCollum, an ex-officio member of the panel, remarked at the conclusion on Morris’ reference to the probability of how the 27 votes split. Elections should be about “certainties,” not probabilities, he said. He said the House might feel that way as well. He didn’t say if he or the House could find certainties on how the 27 votes affected the outcome. Morris emphasized throughout the half-day hearing that the panel’s recommendation was not binding on the House.

The recommendation was required to be made by the end of the day Wednesday.

The House convenes at noon Monday.

Sorvillo has filed two separate lawsuits contesting the election, both rejected because the law provided for a Claims Commission proceeding. He presumably will ask the House to reject the Claims Commission’s advice. But the House affirmation of the recommendation would leave him room again for a legal challenge. I’m seeking comment from his lawyer.