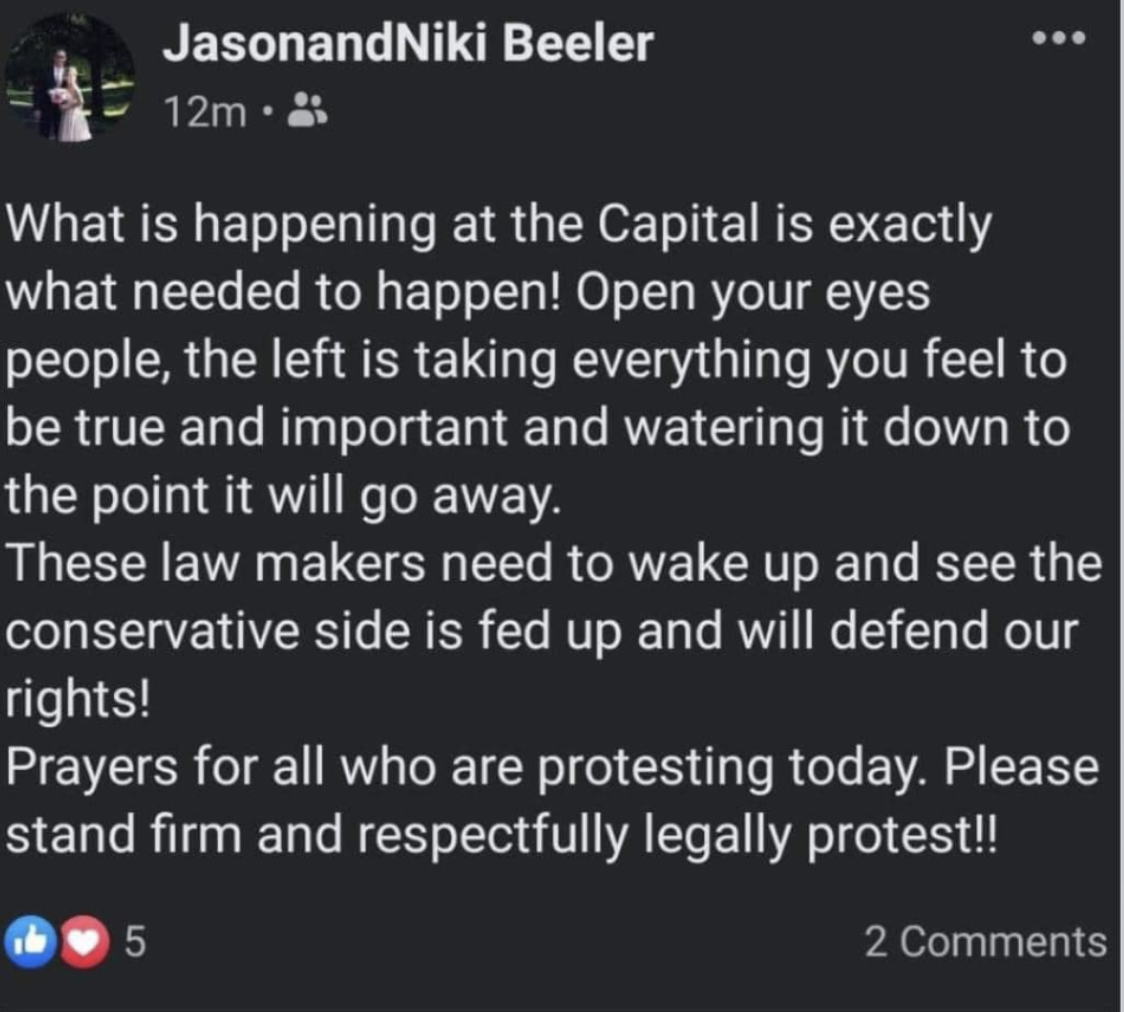 The Bentonville Police Department has “resolved internally” complaints about SWAT officer Jason Beeler who made a remark on Facebook seemingly supportive of last Wednesday’s events.

The department said it had determined the remarks were made in the “early stages” of the pro-Trump rally, march and riot. An hour later, the officer was said to have posted:

“Let me be clear: there is only one way to protest: Legally peaceful with honor is the only way to protest!! Those acting a fool need to go to jail!!!!”

“Based on the complete review of this matter, particularly including this officer’s length of employment with the City, his character generally exhibited during this employment, his apparent intentions when making the post, and his personal statement concerning his having made the post, this matter has been resolved as an internal personnel matter.”

Interesting that one NWA TV station reported the officer’s name, KNWA, and 40/29 did not. The Northwest Arkansas Democrat-Gazette named him this morning. As it happens, I have a copy of his original post (though the Facebook page is now gone).

The Democrat-Gazette also reported today about ill-chosen remarks from another law enforcement officer, Lt. Chuck Wells of the Benton County sheriff’s office. He’s apparently a sympathizer with the view expressed by an Arkansas state trooper who actually attended the march and observed the storming of the Capitol, though she said she didn’t go in herself.

“Every single cheap politician that has spoken out against today’s actions at the United States Capitol… never opened their mouth while your small business was being burnt to the ground this past summer,” the post stated.

One person then commented, “That is exactly right !! Now they think the patriots are the bad guy ! What BS.”

A response posted on the page said: “At the end of the day, you will find that it was antifa that stormed the capitol and did all the damage, not the Trump supporters,” Wells responded. “None the less, politicians were too cowardly to call them out over the summer.”

“The Sheriff’s Office has received no complaints about the post, and the Sheriff’s Office remains vigilant in its unbiased enforcement of the law and protection of all citizens,” said Lt. Shannon Jenkins, a spokeswoman for the office.

Tom Mars, a former State Police director who’s criticized his former agency’s silence about two troopers who attended the event, says he believes he’s identified the second trooper but hasn’t confirmed it. The first, whose Facebook comments I posted yesterday, still hasn’t responded to my request for comment so I continue to withhold her name, though two people have confirmed it. She’s a corporal assigned to the highway patrol administrative office in Little Rock. I’ve also tried to get in touch with the other trooper believed to have been there. He’s posted on social media that he was there and also puts the riot down to Antifa and claims photographers were staged to capture dramatic pictures in the Capitol. He says Antifa wore Trump gear. He also has called for ouster of the Arkansas Republicans who voted to allow the Electoral College vote.

Police have a First Amendment right to support Donald Trump and to attend a rally and march to the Capitol to demonstrate in support of him (bad judgment in this circumstance given advance indications of the potential for violence). But here’s an interesting article on when First Amendment rights can be overcome for suspension and termination of public employees.

Police departments across the United States are currently investigating whether their officers were present during the Capitol siege on January 6. This is a necessary internal investigative step for law enforcement agencies to undertake in the aftermath of the unprecedented attack on the Capitol.

In addition to the obvious criminal aspects of what occurred, there is also the tragic line of duty death of a Capitol police officer to consider. A multitude of crimes took place at the Capitol and for a time it was an active crime scene. Investigations are underway and police departments inquiring into the presence of their members at the Capitol Building on January 6 is an important part of the overall investigation.

The Arkansas State Police REFUSES to investigate its two troopers who were present at the crime scene and who are, at a minimum, potential witnesses to lawbreaking by others even if they acted lawfully at all times. Governor Hutchinson also has refused to get involved, referring me to the stonewalling State Police.

Police officers who were present at the Capitol on January 6 to simply express their views and gather with like-minded individuals would have been exercising a First Amendment right provided that was all they were doing. If they participated in any manner in the storming of the Capitol their conduct will lose constitutional protection as free speech. Speech can be regulated if it is 1) directed at inciting or producing imminent lawless action, and 2) is likely to incite or produce such imminent lawless action (Brandenburg v. Ohio, 1969). Officers who are found after departmental investigation to have advocated or participated in the breach of the Capitol, even if actual entry was not made by them, will find themselves facing discipline and likely termination.

The first breach was of barricades established around the perimeter of the Capitol. Where were the Arkansas troopers when that occurred? Did they move inside the outer barricades, even if accidentally? Can they identify people who were seen, outside the Capitol, assaulting police and journalists? Do they have video that could be useful in the investigation? Should not our State Police, at a minimum, help their brothers in the Capitol police  in assisting the investigation?

If I were Col. Bill Bryant or Governor Hutchinson, I wouldn’t just want to know the answers, I’d demand to know.