Read this month's issue
Browse the issue archives
Advertisement
Home Arkansas Blog Coronavirus today: A rosy outlook, except for deaths, including the end... 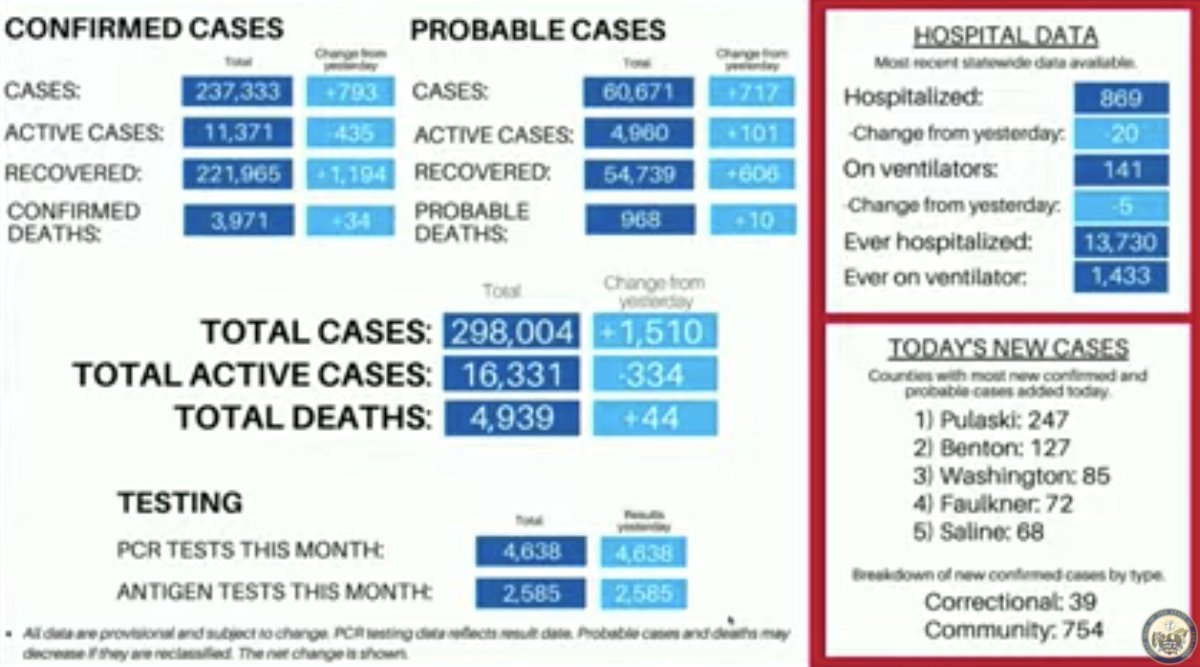 The governor’s weekly session was largely upbeat, except in the continued high daily death toll. Active cases and hospitalizations are down along with the rolling average of daily increases. The positive testing rate remains above 10 percent.

He also touted the state’s performance in vaccinations. He said the state was informed by the Biden team today that the state will receive a 5 percent increase in the anticipated state allocation for at least a three-week period. Walmart also is to receive 10,000 doses for Arkansas as a favored supplier in the federal program, beginning Feb. 11.

Health Director Jose Romero said improvements in treatment and the beginning of vaccinations are contributing to the decline in hospitalizations. But he also said the arrival of the new dominant strains of the virus is inevitable here and precautions are still important. 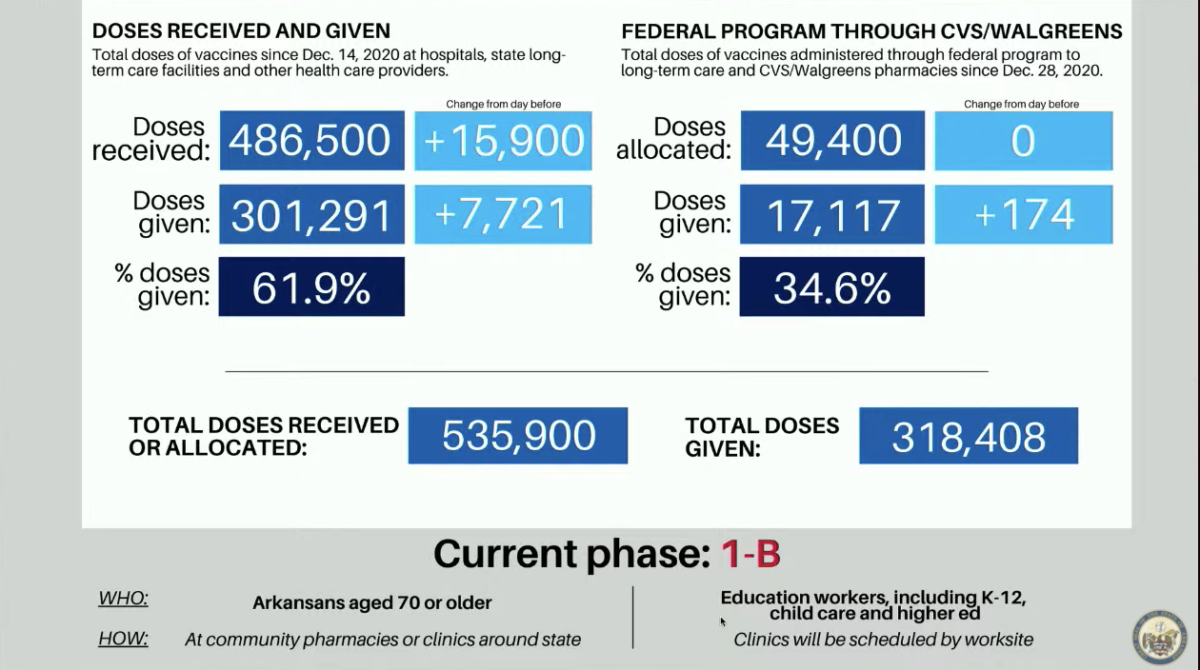 Bar curfew: The 11 p.m. closing time will expire tomorrow. Hutchinson said the decline in cases and being past the holiday periods allows an end to the early closing time for retail drink permits. It will not be extended beyond Feb. 3 (Wednesday).

Revenue report: Governor Hutchinson lauded the $400 million surpluses. He said it signaled a strong economy. He used it as an argument for compromise on the proposed $1.9 trillion aid package from congressional Democrats. He says the economy’s improvement reduces the need. He said Congress shouldn’t “go big, but go reasonable.”

Pandemic unemployment assistance: Commerce Secretary Mike Preston bragged further about the belated restart of the PUA assistance over the weekend. He didn’t address the many complaints intended beneficiaries are still reporting. He said the state had made almost 15,000 payments among the 60,000 eligible. And he urged clicking a link in the email all have received because it is personalized to the recipient. He urged people whose payments were flagged for review to be patient. There have been glitches, he said, but the system should catch up “in a day or two.”

He said those who’ve used up regular unemployment must first exhaust any benefits through the federal extended unemployment compensation program before moving to the PUA program. He acknowledged there’s some confusion in it for participants.

He also said the agency is still working through reports of fraudulent claims, which cannot be cleared without a police report, and he asked for reports to be submitted by Feb. 12.

PUBLIC SCHOOLS: Ivy Pfeffer of the Education Department said 74 percent of schools have not been significantly affected by a need to teach remotely because of COVID-19. She acknowledged all have had major impacts, but she said she expected no waiver from achievement tests this year. She said the results will measure much students have learned. (Some experts think the tests are essentially worthless as a measure of much more than family circumstances.) But she said the department supported dropping the A-F report card this year, as pending legislation proposes.

When will vaccinations move beyond the first part of the 1B group — people older than 70 and education employees — to other essential workers. “We’re not there yet, I can’t tell you exactly how long it will be,” Hutchinson said. The problem, he indicated, is supply.