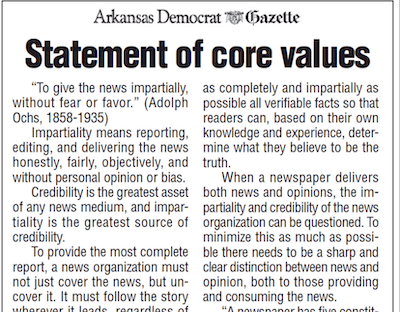 in detail today on the Arkansas Times’ victory yesterday before the 8th U.S. Circuit Court of Appeals in our ACLU-backed lawsuit contesting the state law requiring a  pledge not to engage in any actions that could be construed as a boycott of Israel as a condition of doing business with the state.

Publisher Alan Leveritt told Bowden Israel is a topic of little concern in our generally parochial outlook. “We’re interested in defending Medicaid expansion, not Jerusalem,” he said. “All we’re interested in is Arkansas.”

Bowden’s reported that his employer, the state’s dominant news’paper,’ was among the Arkansas media that have complied with the state’s mandate.

Lynn Hamilton, president of the Arkansas Democrat-Gazette, said the company has signed the forms from state entities pledging not to boycott Israel.

Again: Our “philosophical stance” had nothing to do with Israel. Our stance had to do with refusing to accept a government dictate on speech in return for money. First Israel, then what?