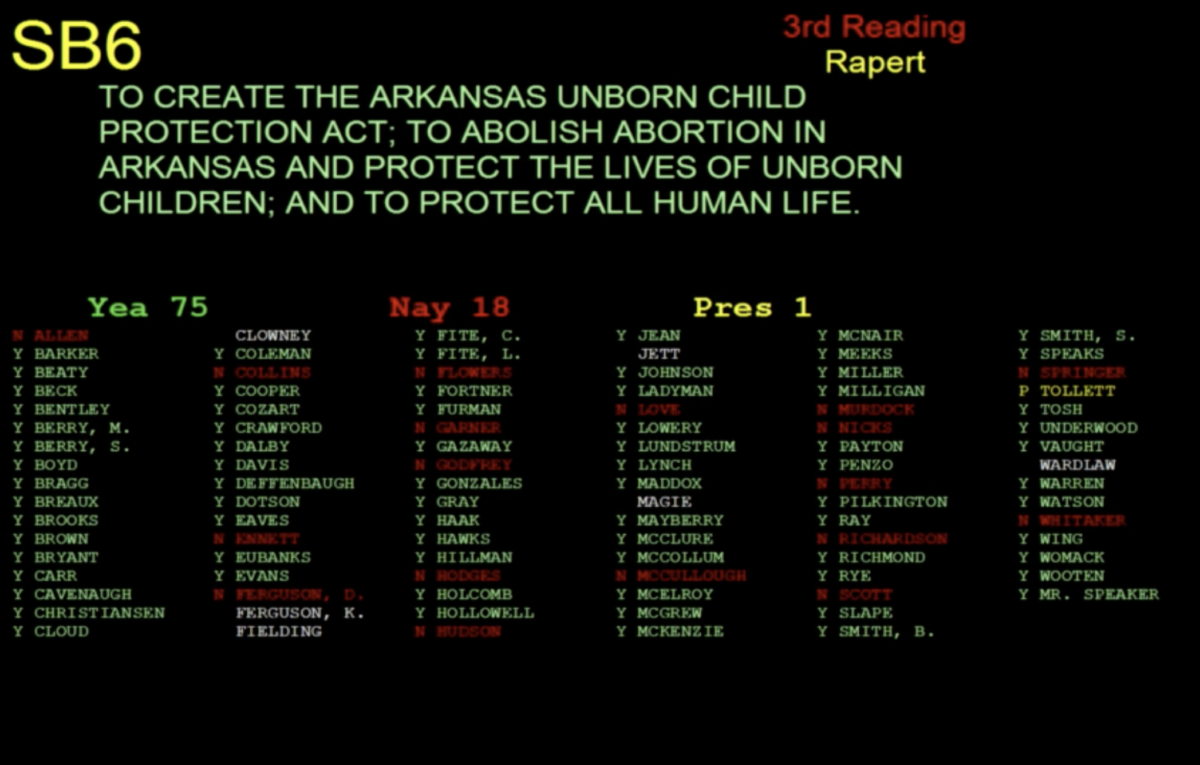 THE ROLL CALL: Votes for Reps. Clowney (against) and Wardlaw (for) don’t appear on the board because they were paired to allow for the absent Wardlaw to vote, but they are added in final tally.

The Arkansas House today approved SB 6, a ban on all abortions except to save a woman’s life, by a vote of 76-19. It goes to the governor, who is most likely going to sign it though he’s avoided saying so directly so far. He’s mentioned his past support for a rape/incest exception (the same thing, right?) but backers say that sop is no longer necessary. 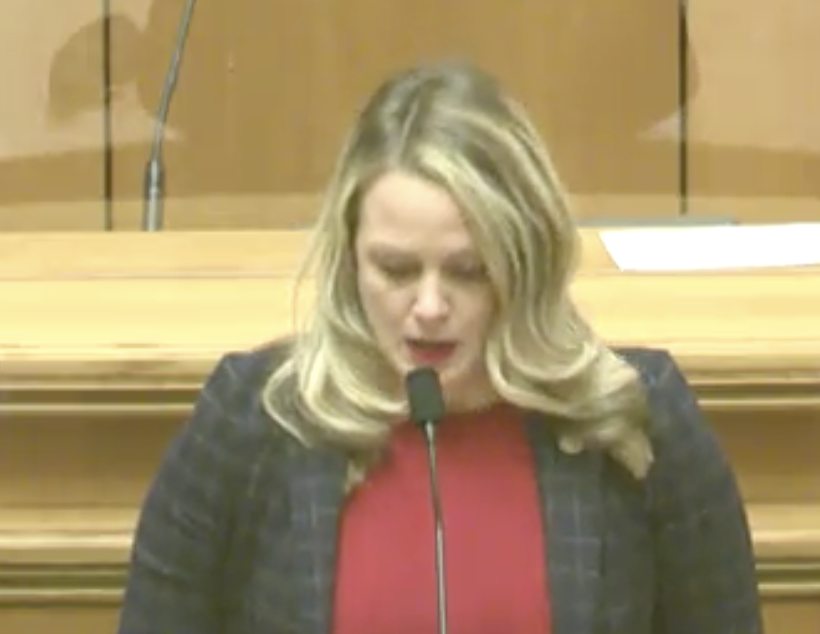 The arguments were familiar, heartfelt and emotional on both sides. The Bible was quoted. Opposing sides argued for and against forcing women to carry to term fetuses that they knew couldn’t survive outside the womb. Rep. Megan Godfrey (D-Springdale) said the legislation, in the cases of women who’ve opted for abortion in such cases, “dismisses their pain and criminalizes their choice.”

When the House session is completed, you can watch the debate on the replay, beginning about 2 p.m. There’s some outlandish stuff, including Bible-quoting Rep. Marcus Richmond‘s depiction of contrary votes as a “Democrat” Party dictate and akin to slavery.

Don’t miss Rep. Ashley Hudson (D-Little Rock) at 2:37 with an explanation of the legal problems with the bill. She said it was “folly” to believe the U.S. Supreme Court is ready to outlaw abortion, with the three new members all on the record as allowing some exceptions this bill does not. She said Arkansas is behind several other states in attempting this. And it will lose before the Supreme Court, she said.  How will Arkansas recruit doctors who could be made a felon for doing their medical duty, she asked. What does “saving the life of a mother” mean? The definition is not explicit. “How are we going to prosecute these cases?” What does the language mean for D&Cs and in utero treatment of fetuses? Why on earth would anyone come to Arkansas given the “extreme limitations of this bill?” But finally, she said, the state is telling women “their trauma doesn’t matter.”

“We don’t have to make women collateral damage for this political cause,” Hudson said.

A lawsuit can be expected to enjoin enforcement of the law. It is unconstitutional under existing U.S. Supreme Court and 8th U.S. Circuit Court of Appeals precedents that say abortion bans are prohibited before viability of the fetus around 23 weeks. This bill would eliminate any pill or procedure that works after conception, in the first days after sex through pharmaceutical abortions that induce miscarriages.

“We’re disheartened to see a majority of legislators, who took an oath to uphold the Constitution, act so brazenly to undermine its fundamental guarantees. At a time when so many Arkansans are facing financial hardship and personal loss from a global pandemic, it is especially reprehensible that so many lawmakers remain hellbent on a harmful crusade to intrude on people’s personal autonomy and force them to continue pregnancies against their will. This abortion ban is plainly unconstitutional and we stand ready to challenge it and any effort to block Arkansans from care or dictate their personal medical decisions. We will be seeing the state of Arkansas in court again.”