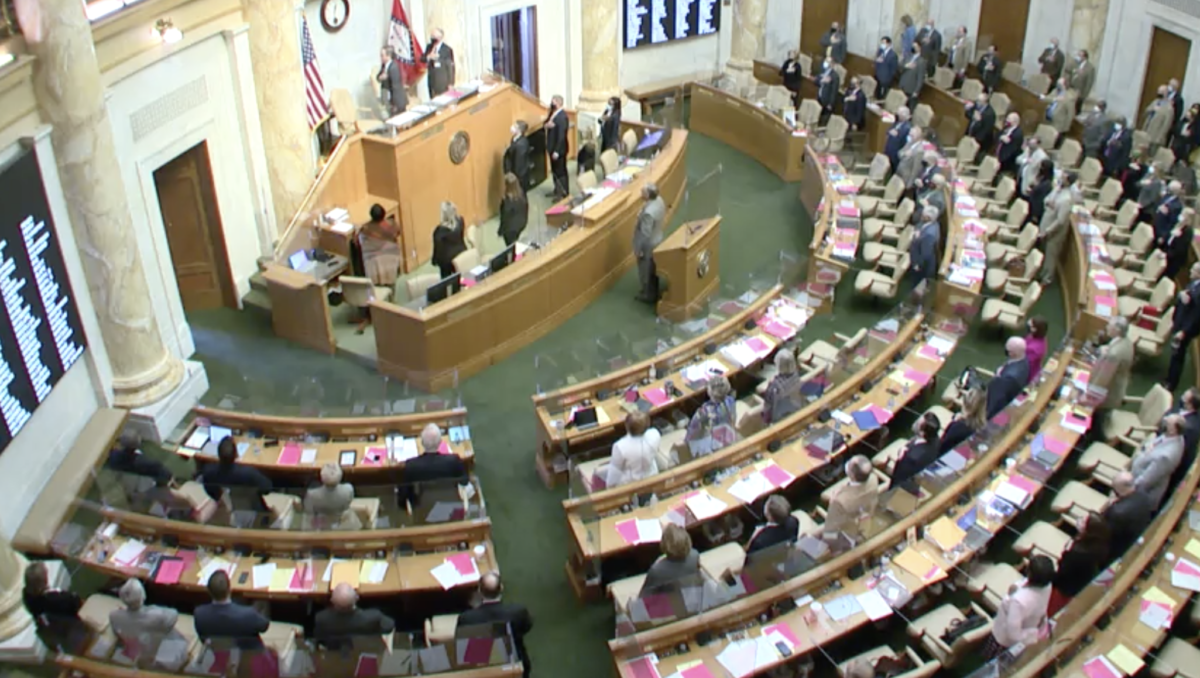 FETUS FIRST: That was the vote of the House yesterday in approving a ban on abortions in Arkansas, a law sure to be declared unconstitutional.

The House completed action Wednesday on SB 6, the ban on abortion in Arkansas, without exception except a nebulous “save the life of the mother.”

Governor Hutchinson will make it law next week. But some attention needs to be given to the many faults of this ill-considered legislation.

I refer you again to Rep. Ashley Hudson’s explanation of the legal shortcomings of this legislation and the costs of the bill to women, the state, doctors and others.  Find it at 2:37:55 on the link to the House video from Wednesday. It is a “lost cause,” she said. It will create felons of doctors trying to provide the best medical care for a woman. Does a “reasonable likelihood” that a procedure causes an abortion include a D&C or an in utero treatment of a fetus? There are no explicit definitions for this or what saving the life of a mother means.

It’s a masterful assessment, including the failure to include an exception for victims of rape and incest (rape by a family member), even a child. It illustrates the coldness toward the interests of women — living human beings on earth, unlike the sometimes microscopic embryos in pharmaceutical abortions in the first weeks of pregnancy.

The passage of this unconstitutional legislation (the ACLU will sue and precedent will demand a judge enjoin its enforcement) reminds me again of the account of an Air Force officer who provided his family’s wrenching experience on the occasion of the Arkansas legislature’s passage of another anti-abortion bill, somewhat less draconian than this one. It is no less powerful today, perhaps more so. SB 6 would make this woman a participant in a felony and subject her doctor to criminal penalty.

Ten months ago my wife and I learned that she was pregnant, and we couldn’t have been more excited. We made a baby budget, bought parenting books, and paid careful attention to everything she ate. We were ready to be parents.

At nineteen weeks we had the ultrasound that would tell us our baby’s gender. Our best friends were having a boy, and we were anxious to know. Within moments we were looking at our baby girl for the first time. Her name was Amelia.

Imagine how we felt when our ultrasound technician stopped smiling. I am a pilot in the Air Force. Even flying in combat over Iraq and Afghanistan, I had never fully understood the meaning of dread. Now I know, dread is what occupies the 15 minutes between an ultrasound and doctor’s return.

After a very long weekend, we were seen by a high risk specialist. Two new words were inked into our vocabulary: “encephalocele” and “holoprosencephaly.” Do not Google these terms; the results will break your heart. Of her numerous problems, these were the most serious. We had previously opted for every diagnostic test to ensure our baby’s health, and were one of the first couples in Arkansas to try a new screening of our baby’s chromosomes in blood taken from the mother. We had gotten a false negative. Amelia would not survive to term.

My wife is a surgical nurse, and our family is one of doctors, educators, and veterans. We knew the prognosis, what questions to ask, what every term and statistic meant. Regardless, I cannot adequately describe our grief, fear, and anger, or the agony of days spent on hold with insurance companies and hospitals.

The genetic counselors in the high risk pregnancy center were patient and understanding, but the situation was bleak. We could allow the baby to die naturally, but my wife could feel the tiny baby kicking and that constant reminder would be emotionally unbearable. There were several options for termination of the pregnancy. We chose the option that was safest.

We returned to the specialist center later and sat down in front of the ultrasound for the last time. The doctor placed a needle through my wife’s uterus to the baby’s heart, which stopped immediately. Two weeks later, our stillborn baby was delivered in a quiet delivery room. She weighed eight ounces, much smaller than I expected.

Many family friends and coworkers have since come forward with their own stories of abortions, miscarriages, and stillbirths. We had never suspected. As one mentor put it to me, I had joined a secret fraternity of parents who had lost a baby.

A bill proposing a 20-week cut-off for terminating pregnancies in the State of Arkansas just passed the Arkansas House of Representatives. It is arbitrary and wrong.

Our first ultrasound happened at nineteen weeks, as is the case within most pregnancies. It is usually the first opportunity for doctors to diagnose serious problems. By the time we were seen by a specialist, we were past twenty weeks. Recently a coworker came to my wife in tears, sharing her story for the first time. Her own ultrasound had revealed her baby’s fatal kidney failure and she faced the same gut-wrenching decision.

The Arkansas legislation establishes criminality at the very moment when parents and their doctors have to face painful reality. The bill is a product of ignorance and insensitivity to the suffering of parents and their unborn children. This legislation demands that grieving mothers carry their baby as long as possible, without exception. It declares that politicians know better than medical experts in every situation, even ours. This is not an argument about unwanted children. It is about the right of parents and their doctors to make educated and moral decisions with all the facts, not with a calendar.

The debate about abortion is personal for us. We wanted our child. We do not vote in Arkansas, we are here because I am stationed in Little Rock, and it is where we have to seek medical treatment. Military families like mine with spouses deployed and concerns of their own are subject to this unconscionable law as well.

It is unfair to demand that parents like us come forward with stories of personal loss, now in the state Capitol or later in courthouses. The decision we had to make was painful, personal, and ethical. My outrage as a husband and would-be father will not permit me to remain silent.