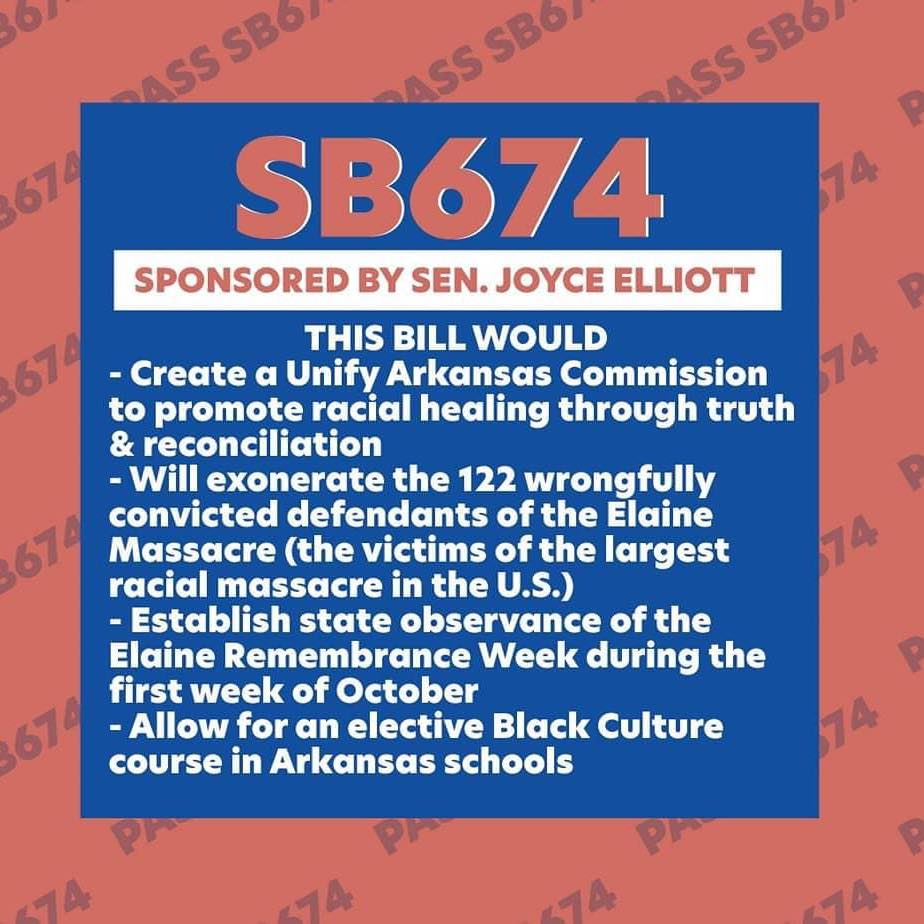 Credit due: to Young Democrats of Arkansas for developing this summary.

The sham hate crime bill managed to further divide Arkansas between groups historically discriminated against and those bound not to give any protection to certain oppressed groups.

Next week, comes a more meaningful bill. It is SB 674, which might inspire people to listen to and talk with one another. It is sponsored by Sen. Joyce Elliott, Rep. Vivian Flowers and several other Democrats.

It would establish a Unify Arkansas Commission to encourage county-level remembrance projects. It would provide a statewide observance of the National Day of Racial Healing (which the governor has twice proclaimed), Elaine Remembrance Week and National Freedom Day.

It would provide for an elective course in black culture in public schools and provide posthumous exoneration for the 122 people wrongfully convicted after the Elaine Race Massacre.

Proponents will testify in a Senate committee Tuesday. This will be a heavy lift.

My friend Audrey Evans, a retired federal bankruptcy judge, is among the supporters of the effort. She shared with me a letter she’d written to a legislator urging support for the bill. Some of it:

After I retired from the bankruptcy bench, I participated in the naming of the Federal Courthouse in Helena in honor of Judge Jacob Trieber, who, in 1900, became the first federal Jewish judge in America.  Studying Judge Trieber lead to learning about the 1919 Elaine Massace which then led  to my participation in the creation and dedication of the Elaine Massacre Memorial in Helena on September 29, 2019.  During this long process of naming a courthouse and then building a Memorial and the support for it,  I met and worked with many people – black and white, some whose ancestors did the killing and some whose ancestors were killed, and I learned that we could all work together even when commemorating something as terrible as a massacre.  I learned that when we come together with the intent of acknowledging the truth, acknowledging the harm, and acknowledging our common humanity, that not only does every one benefit, but a foundation is built for a better tomorrow.

We can’t have two countries.  We can’t have one country acknowledging massacres, lynching and brutalities, and another country ignoring the past and turning a blind eye to that which is both true and still a part of the fabric of our country.  Only education, communication and the intent to heal will bring us all together.  And when we build a strong Arkansas, we build a strong America.  Our foreign enemies are many and mighty, but our united America grows in power as we build trust in each other and in our government.

This Bill creates a structure to build trust and unity. It puts the process of recognition and communication into motion.  This Bill is the beginning of healing a divide, I urge you to vote for it.

One of the leading advocates and a co-author of the bill, an expansion of failed 2019 legislation, is Kwami Abdul-Bey. If you use Facebook, he’s worth a follow for posts on justice, peace and racial issues.

UPDATE: The bill did not get a second for Sen. Clarke Tucker’s do-pass motion in the hearing Tuesday.