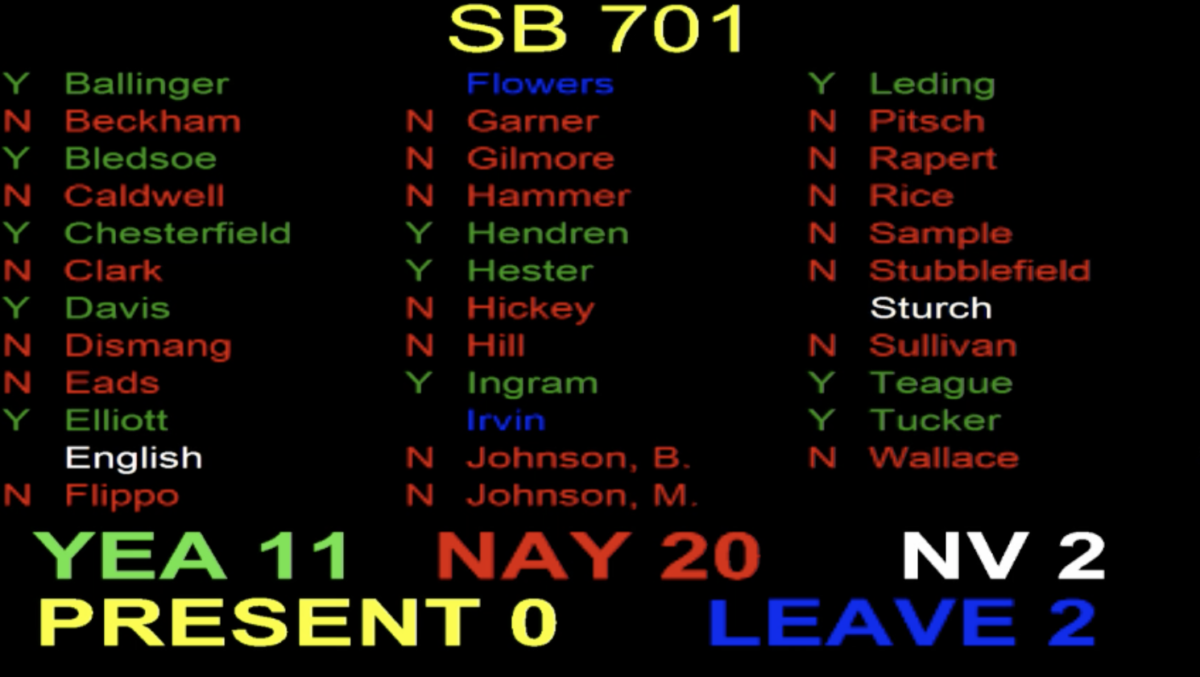 The question was asked and answered in the negative today in the Senate on SB 781 by Sen. Clarke Tucker, a Little Rock Democrat.

It enjoyed bipartisan support. It incorporated many suggestions from Republican Sen. Kim Hammer, architect of most of the Republican vote agenda bills this session, as well as other Republicans who worked on the bill.

Its key element is simple equity. In adding new impediments to absentee balloting this year, Republicans eliminated the ability to correct minor errors detected in checking returned absentee ballots, particularly an ability to cure a failure to include in the envelope the newly required photo ID.

It’s worth noting that the photo ID requirement was added by Republican sponsors because of the vagaries associated with Arkansas being one of only four states that requires a signature match between voter registration records and the absentee ballot application. Never mind that the signatures might be 50 years apart and much different. A signature match continues. Even Georgia has dropped that.

Tucker’s big fix is this: An absentee voter whose ballot was set aside as provisional on account of problems — say failure to include the photo ID — has until noon Monday after the election to provide the ID or otherwise address inconsistencies. This would mean a few more legitimate votes would be counted.

This is simple fairness. An in-person voter who forgets his ID may cast a provisional ballot and produce the ID by the Monday following an election and have a vote counted. Not an absentee voter.

Why not absentees? Well, some Republicans think too many Democrats vote absentee. That was the case in Pulaski County, which explains Pulaski County Election Commission Chair Kristi Stahr’s disjointed and misinformed opposition to the bill in committee. In its first run yesterday in committee, the bill failed on a voice vote.

Based on questions, Tucker amended the bill yet again on the Senate floor yesterday and tried to get another vote in a Senate committee later Wednesday. Committee Chair Jason Rapert wouldn’t allow it to be considered. Too late in the session; too controversial, he said. But supporters included Republican Sen. Breanne Davis. Republican Sen. Cecile Bledsoe also argued that Tucker’s bill should be heard. Rapert held fast. No hearing for Tucker’s bill.

Davis then took matters into her own hands. She obtained signatures of five senators — hers, Tucker’s and three other Republicans, Bob Ballinger, Trent Garner and Bart Hester — to report the bill out with a do-pass. When Davis called the chair to inform him, as the rules require, he was not happy.

Indeed, he was so unhappy, Tucker took the floor this afternoon to praise work from fellow Republicans in trying to work the bill into a posture for passage, but rather than put them in a difficult spot, Tucker asked that the bill go back to committee.

Sen. Linda Chesterfield and Joyce Elliott spoke against the motion to send the bill back to the committee because it would kill the bill. Elliott said it was a fairness issue. If the chair was notified, which he was, this bill shouldn’t die, she said.

Rapert disputed that Tucker had five votes during the meeting. He said Ballinger had told him he was not an aye. He said he was surprised to learn about the action by committee members shortly before 8 p.m. He said his phone had “blown up” with opposition to the bill from people who criticized him for “letting it happen.” Of course there were unhappy people, particularly Republicans trying to strangle Pulaski County voters.

Sen. Bart Hester defended Tucker. He’d made more than a dozen amendments as requested. He made new ones yesterday. He had the votes in committee, Hester said, but wouldn’t ask a roll call when Rapert declared the bill failed out of deference to the other members of the committee, all Republicans. Hester said he and Davis had called Rapert about what happened. He said the action to sign it out was out of “respect for a member who’d worked his tail off to get his bill on the floor today.” Davis also opposed sending the bill back to the committee. She said she led the effort to get the votes from the committee, based on guidance from Senate staff on the rules, and then called Rapert to notify him.

The people who are opposed to this bill have had time after time to speak against it, Davis said. “There’s been debate on all sides of it.” She objected to implied criticism of the character of the people who’d worked to get the bill to the floor.

Ballinger said he was a no in the committee, but changed his view when Tucker “once again made that amendment as he’s done all session long.”

He’s not conniving, he’s not sneaky, he’s bent over backward to meet objections, Ballinger said. “I felt about like this tall yesterday when I wasn’t allowed a yes when new information came up.” Ballinger said Tucker did everything right, but Rapert “clearly doesn’t like the bill.”

Hammer said he’d like to hear the bill on the merits and vote it up or down.

After that, Tucker withdrew his motion and asked for debate on the bill.

Up jumped Sen. Mark Johnson, an architect and advocate of vote suppression tactics, particularly measures aimed at increasing the power of the Republican-controlled Pulaski Election Commission. He claimed the bill changed a constitutional amendment and thus needed 24 votes. The Senate legal counsel, upheld by the acting Senate president Sen. James Sturch, agreed that it was not an amendment of voter registration in the amendment, but an absentee ballot rule. Johnson appealed that ruling to the Senate.

Senate President Pro Tem Jimmy Hickey said the legal counsel Steve Cook, in concert with the Bureau of Legislative Research, had carefully considered the issue and he joined their opinion that the bill didn’t need an extraordinary vote. The Senate sided with Hickey and rejected Johnson’s appeal.

Then the issue turned to the bill itself. Tucker explained its detailed effort to streamline absentee processes including ensuring notification of state officials and a local prosecutor of potential fraud. He said the secretary of state’s office and many county clerks had endorsed his effort. He said he’d intentionally adopted language from a bill passed earlier by Republicans and inserted it in the bill. He said it changed none of the bills passed this session.

It was a waste of time and effort, though illustrative of this session’s tribalism. One Republican claimed the bill contained language he hadn’t seen until today, referring to a section that was in the bill first filed in January. Another talked of complaints from people who cited things that aren’t in the bill.

In the end, Tucker picked up four sympathy votes, in addition to the seven Democrats.

Even with Senate passage, it would have been an uphill climb. The legislature is to adjourn Tuesday. It would have needed House committee approval Monday and a vote Tuesday.

The biggest problem here wasn’t timing or process. it was the sponsor — a  Democrat from Pulaski County. And vote suppression legislation is aimed to make his number even smaller in the years ahead.