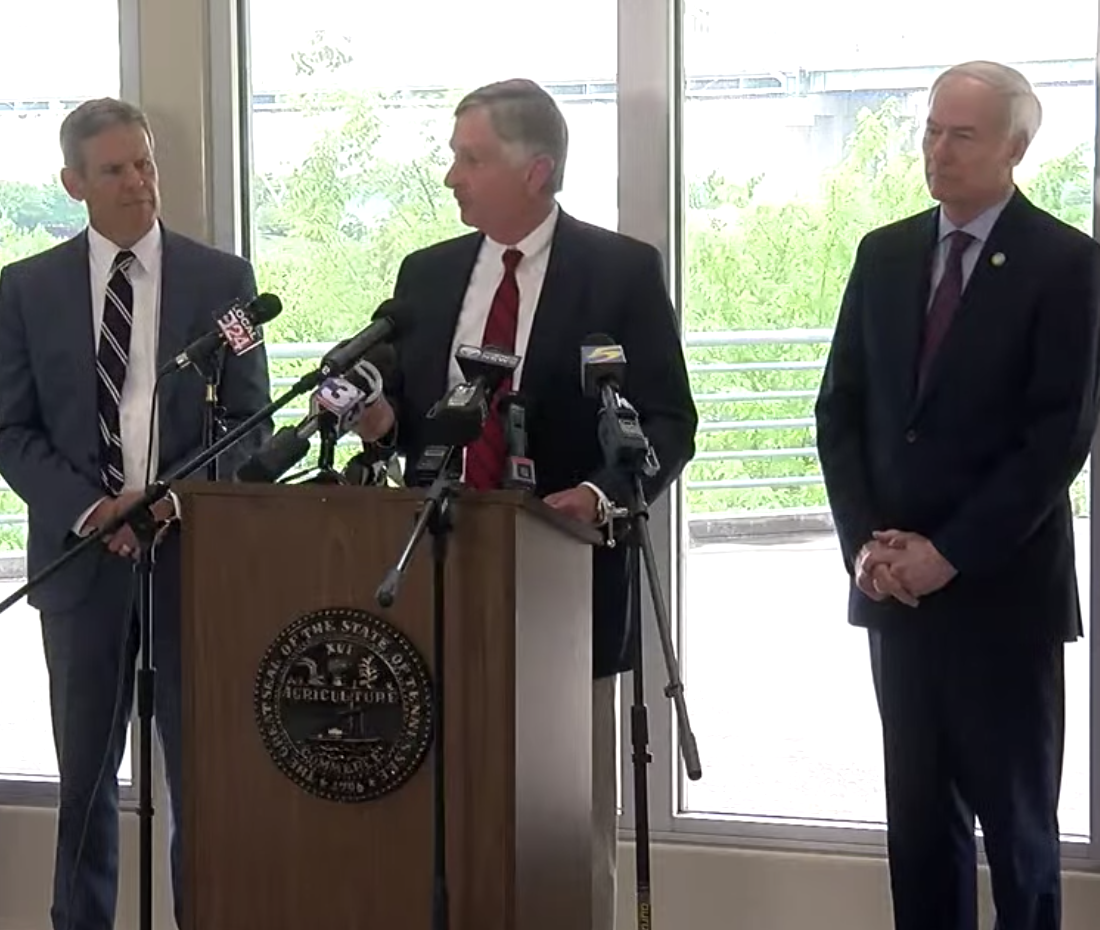 Clay Bright, the Tennesee highway director, said a steel fabricator was expected to complete work Wednesday or Thursday on 35-foot plates weighing 18,000 pounds that will be installed on either side of the fractured beam on the bridge to stabilize the span as repairs begin. The repairs call for installing more temporary supporting beams and then replace of a portion or all of the fractured beam.

Work will be done from the bridge deck down on initial work, such as installing work platforms and then from barges on the river up to install the replacement beam.

Lee said the work would be done in the shortest time possible, but without compromising safety for workers or those who eventually use the bridge again. Hutchinson said much the same. How long? No time offered. But as the day progressed, several officials said it would likely take “months” to complete the design for the permanent repair and put it in place. The message grew clearer at an afternoon session with the legislature that no traffic would cross the bridge before the repair was completed.

The general contractor, Kiewit Corporation, is expected to begin building work platforms on the bridge this week.

Bright said an inspection of the Interstate 55 bridge over the Mississippi River was underway out of an “overabundance of caution,” but he said, “I-55 is safe.” It is carrying both I-40 and I-55 traffic on a narrower, older bridge, much of it big trucks.

Hutchinson was asked if he expected more personnel action beyond the firing yesterday of a lead bridge inspector who missed a fracture in the beam in 2019 and 2020 inspections. He didn’t respond directly. He said every bridge the fired inspector had inspected would be checked again. He didn’t know how many bridges that might cover.

In response to questions, Lee continued to criticize the Biden administration stimulus spending for not including enough money for roads and bridges.

Lee and Hutchinson both praised an inspection process that discovered the fracture, but highway officials have already said that was “happenstance,” found by a company not inspecting beams but reviewing other parts of the bridge.

No tentative timeline is available yet. Lee said the engineering would be as good as that for any bridge when he was asked about people who’ve said they won’t be comfortable driving on the repaired bridge.

Arkansas Democratic Party officials have scheduled their own news conference Wednesday in West Memphis to emphasize the need to repair aging roads and bridges as part of a push to pass the American Jobs Plan for infrastructure.

An Arkansas legislative committee is going to discuss the Arkansas Department of Transportation at a meeting at 3 p.m. today. It might be interesting. The agency isn’t held in high regard in some quarters of the General Assembly.

UPDATE: Interesting opinion piece on CNN from an engineer who’s studied this bridge. He fears potential for future problems.

To repair the crack, a bolted splice is an option, where steel plates are used to connect the fractured plates of the box beam. This could be completed within a few days and would guarantee that no crack will never develop at this specific location again.
However, it would not guarantee that other weak spots along the beam wouldn’t trigger additional cracks due to altering the existing load path of the structure. This means that when a specific section of the bridge is strengthened through repairs, the forces within the overall structure will redistribute, triggering failures in the weakest links. It is essential that other weak components within the system be identified before any repairs are made. This should be accomplished by engineers who must perform a robust analysis to understand the consequences of strengthening the fractured beam component on the overall behavior of the structure.

The larger message is that many bridges need better assessments and repairs all over the country. 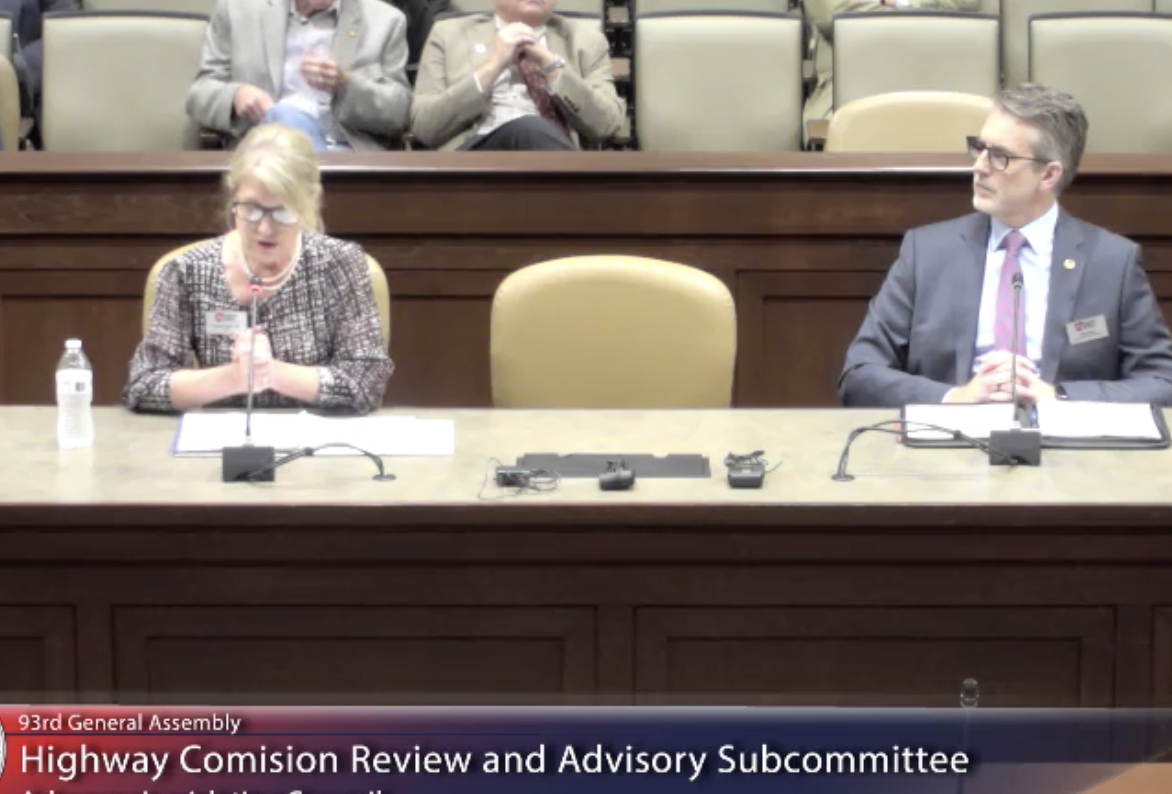 AT THE LEGISLATURE: Lorie Tudor and Rex Vines.

UPDATE II: Lorie Tudor, the director of the Arkansas highway agency, repeated for the legislative committee all the things she’s said at earlier briefings about assessing responsibility for errors and steps to improve the department process to prevent failed inspections in the future. She was joined by Rex Vines, the department’s chief engineer.

“No excuses,” she said. “No excuses.”
Vines repeated the repair update provided earlier in Memphis.
Sen. Trent Garner wanted more details on how the fired bridge inspector was negligent. The employee was supposed to look at every inch of the beam, but he apparently didn’t deploy the machinery, known as a Snooper, properly in a way that he could see all parts of the beam.
Vines said it was believed the beam failed from fatigue near a weld joint, though they are not yet sure the failure was the weld.
In response to another question, Tudor admitted there wasn’t someone working behind the lead inspector to be sure the job was being done correctly. She said the department would address that.
Garner wanted to make the point that wasn’t a lack of money but a failure of the inspection process. Tudor said the fix in 2019 would have cost the same as it costs today. She said the problem is also a sign of a broader need for structural improvements in infrastructure.
Tudor said she couldn’t estimate the economic cost of the closure, except that the trucking industry said truckers’ cost was more than $2 million a day.
Sen. Gary Stubblefield said what would happen if the I-55 bridge had to be closed. That would be a “worst-case scenario,” she said. But she said one inspection found the bridge sound and another is being done to support confidence that it is safe. In response to a question, a department official said the fired inspector had worked on the I-55 inspection, but he was not the team leader.
Tudor acknowledged that both bridges at Memphis — one 50 and the other 70 years old — were designed for less traffic and lighter trucks. “We’re just going to have to be really, really careful going forward” in keeping up with accelerated damage.
It developed in discussion today that the first footage of the crack from 2019 was from an unknown source on social media, confirmed by other drone footage taken by a bridge consultant assessing another part of the bridge. Tudor said she’d also had an offer from someone of other private drone footage of the bridge.
Tudor said the federal government had been helpful and she expected the state and federal government would do whatever was necessary to get the bridge reopened.
Advertisement
advertisement
advertisement