On Saturday, a sign taped to a window at Cannibal & Craft — a bar/nightclub located at 307 President Clinton Ave. in the River Market — started making the rounds on social media. Included as “unacceptable attire” were garments and accessories like sports-affiliated hats, white T-shirts, leggings, baggy jeans, beanies and sunglasses, as well as gold chains, “excessive jewelry” and “gang/club-affiliated colors, patches and jackets.”

Posts about the sign’s dress code restrictions went viral over the weekend, prompting debate over whether the policy suggested that Black people are unwelcome in the establishment, and whether it was at odds with attire worn by the club’s employees and clients in the past. The waitstaff wears tank tops, seemingly putting them at odds with the dress code. And before they took down their Facebook page, Cannibal & Craft of Little Rock shared multiple photos of women in strapless or sleeveless tops, also an apparent violation.

Legally, businesses have a right to require dress codes, and signs on businesses indicating dress code restrictions are not uncommon. “No shirt, no shoes, no service” sparked accusations of sartorial classism since the ’70s and, in the interest of public health, “masks required” signs have been ubiquitous on retail doors for more than a year now. But Cannibal & Craft, which opened in October of 2020, struck a nerve with the sign, and both the Little Rock and Fayetteville locations removed their Facebook pages from public view as word spread. 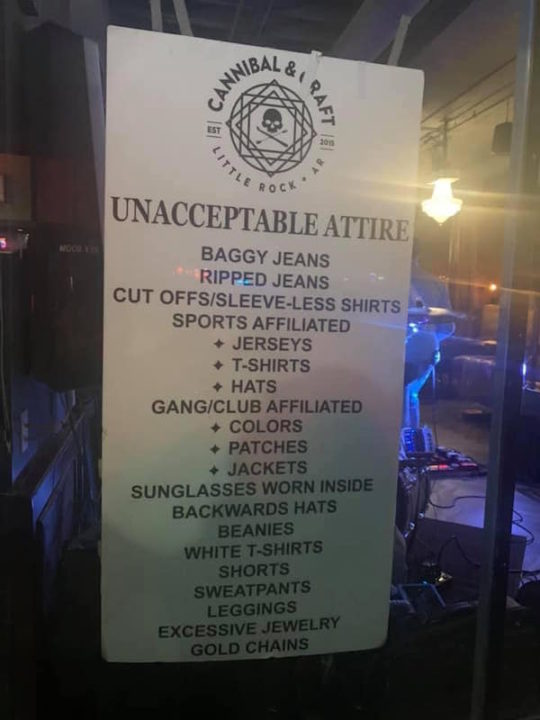 The owners of the original Cannibal & Craft in Fayetteville issued a response on Facebook, distancing themselves from the Little Rock location and the dress code policy. 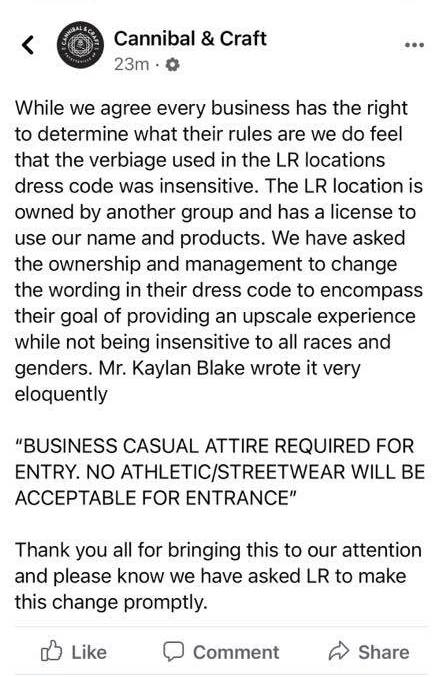 We walked by this morning and it looks as though the sign has been removed. We contacted the Little Rock location midday on Saturday requesting comment, and have not yet received a response.