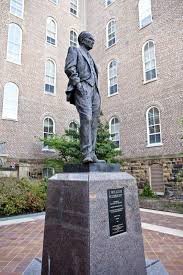 KEEP IT BUT MOVE IT: So recommends chancellor.

University of Arkansas Chancellor Joseph Steinmetz today released a letter rejecting a committee’s recommendation that former Sen. J. William Fulbright’s name be stripped from the college of arts and sciences.

He recommended moving his statue from its prominent place n front of Old Main to a place where his legacy could be explored in more context. The committee had suggested the university museum or a place off-campus. His record includes a segregationist voting record and doubts even after he left office about whether Black people were ready to vote. Steinmetz cited Fulbright’s opposition to the Vietnam war, the scholarship program named for him, his tenure as UA president and other aspects that made the issue difficult to reduce to “simple math.”

Steinmetz DID go along with the recommendation to take former Gov. Charles Brough’s name off a campus dining hall given his ugly association with the Elaine Massacre of black people. It appears a factor also was the fact that hardly anybody at UA these days knows who the heck Brough was.

No big surprise. Too many old, rich white guys opposed deposing Fulbright. Also racism is in flower in Arkansas these days. Steinmetz cited a new state law that might require the university’s approval for changes to historical monuments, though some have questions about the validity of this law,

It cites a number of initiatives to create “an environment where all members of our community feel a sense of belonging and an ability to contribute in meaningful ways.” No CRT mentioned.

The recommendations go to the Board of Trustees.