The key positive finding for plaintiffs: 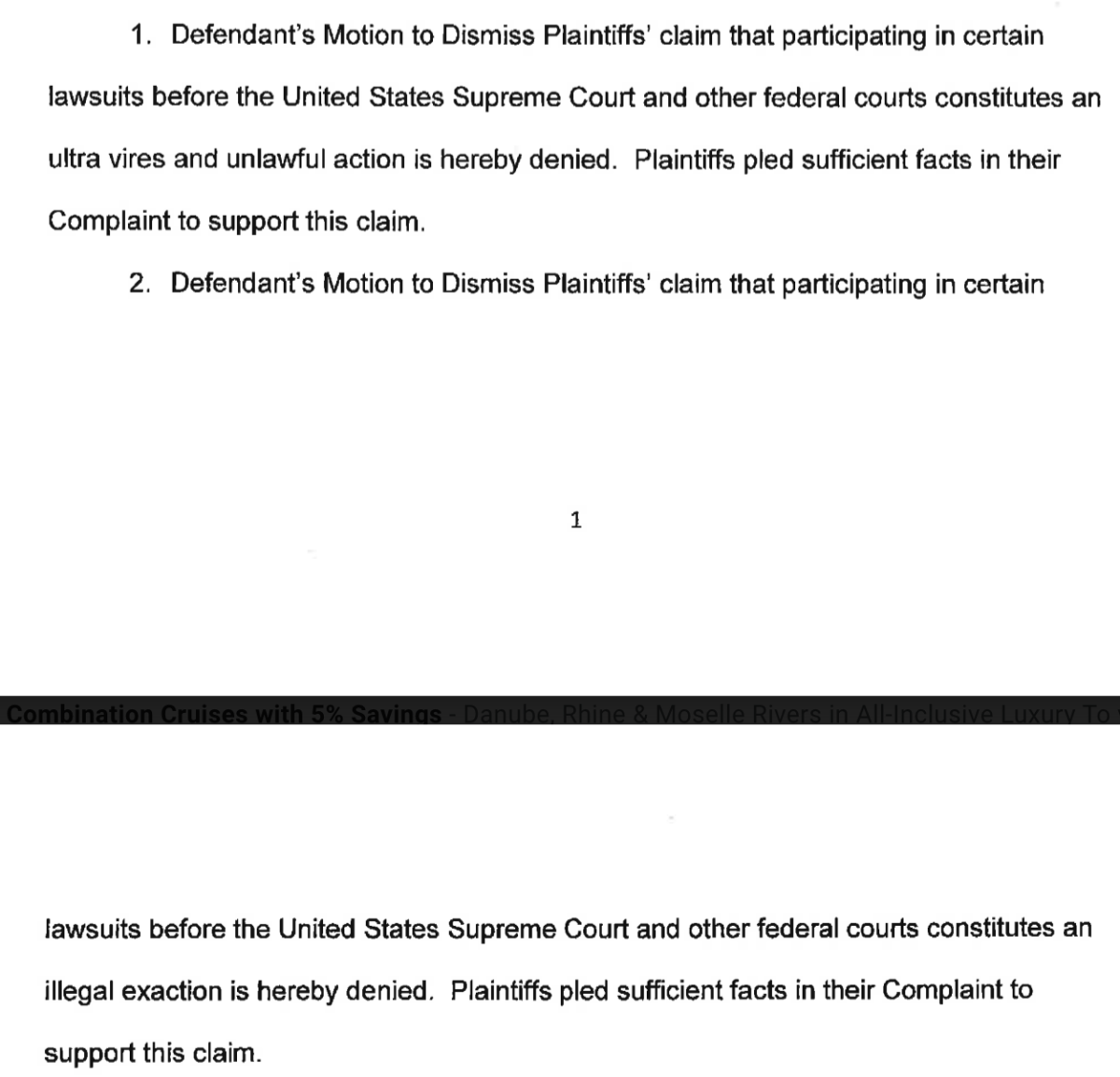 In other words, the plaintiffs have made a sufficient showing of evidence to have a trial to argue that it was illegal (“ultra vires”) for Rutledge to spend state money intervening in lawsuits that had no direct connection to Arkansas. A prime example is the Texas lawsuit seeking to overturn the presidential election, an intervention that has the Texas attorney general, whom Rutledge supported, in trouble with bar ethical regulators.

The taxpayer lawsuit, filed by Richard H. Mays, challenged both Rutledge’s spending on $2 million worth of advertising that features her as a consumer protection crusader as well as her participation in out-of-state lawsuits. Mays argued Rutledge was attempting to enhance her gubernatorial candidacy by these actions, particularly the lawsuits, where the attorney general is limited by law to work on things that are of interest to the state. Rutledge has contended that the presidential election outcome was of interest to Arkansas since it voted for Trump and therefore seeking to overturn votes against Trump in other states was a proper activity of her office. She produced no evidence the votes were fraudulent and the U.S. Supreme Court dismissed the case.

Gray’s ruling today kept the lawsuit interventions= question alive, but not Rutledge’s  spending on self-promoting advertising (she has since altered the advertising to no longer use her image in the TV spots).

Rutledge’s won on these points: 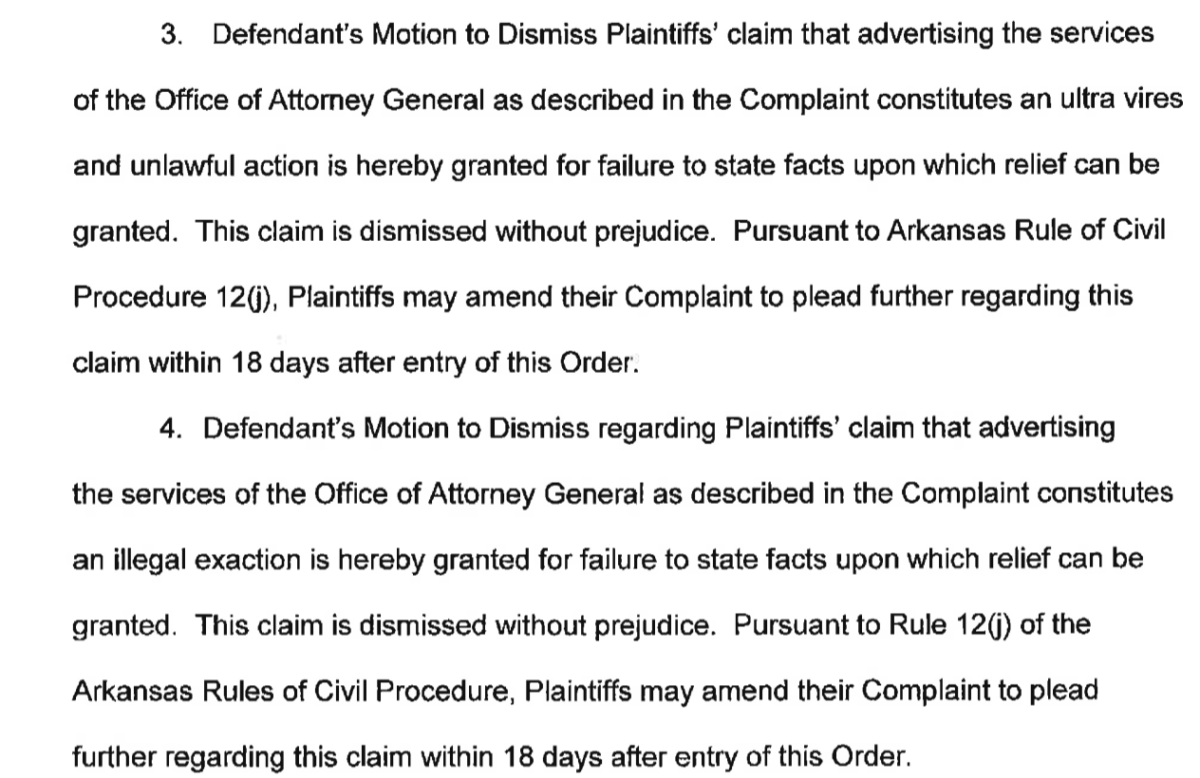 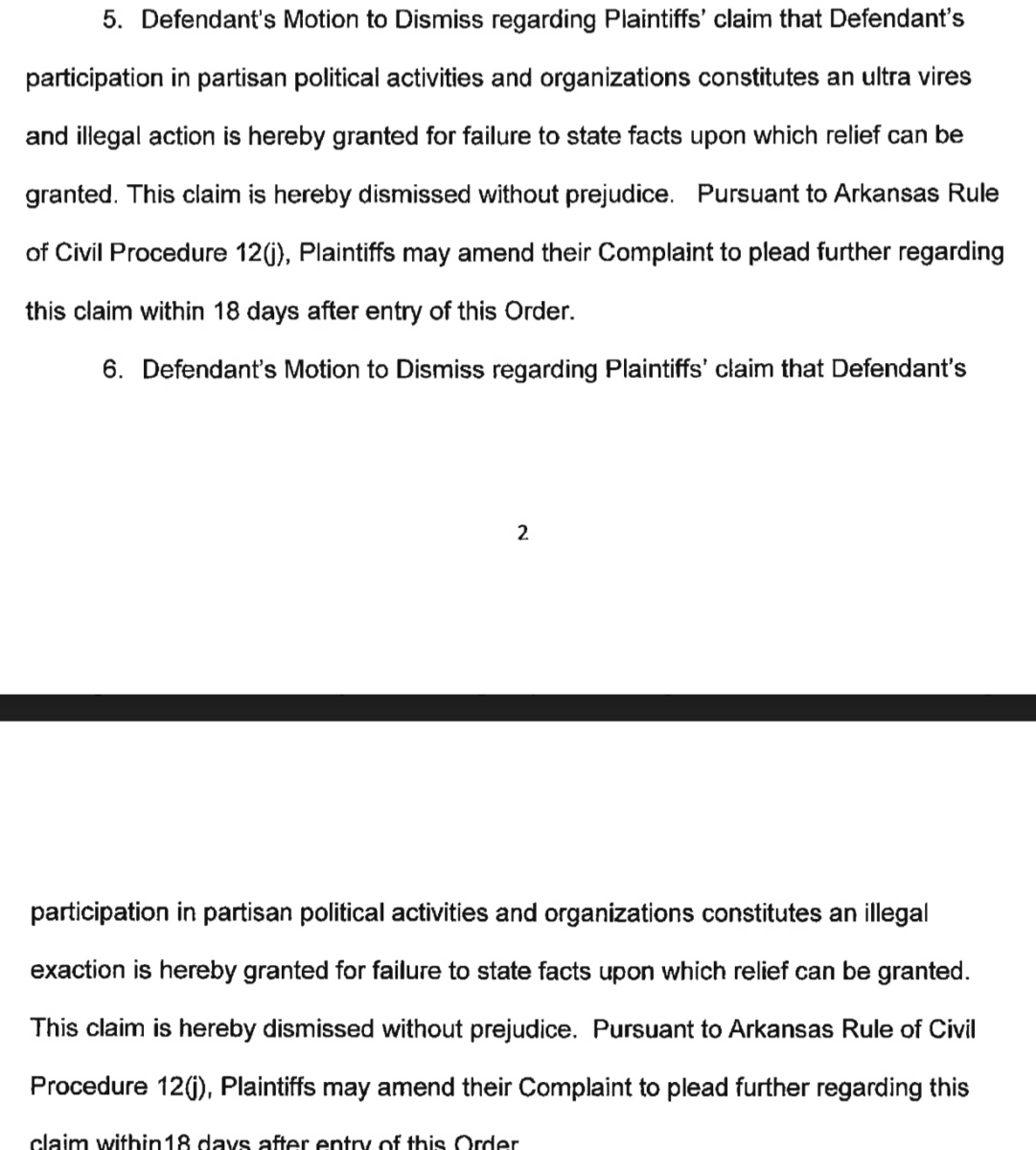 On other points, Judge Gray said she’d hold in abeyance Rutledge’s argument that she was immune from lawsuit as a state actor, so-called sovereign immunity. Since the judge is giving the plaintiffs time to plead further on issues she dismissed, she said she’ll consider this argument if plaintiffs amend those pleadings.

The plaintiffs have 18 days to amend their complaint. That, for the time being, restricts Rutledge’s ability to go to the Arkansas Supreme Court for an intermediate ruling on Gray’s decision to let the lawsuit proceed.

Gray also dismissed for the time being saying the suit should be dismissed as essentially a political question and her argument that the plaintiffs lacked standing.

This would be political grist in some campaigns, but Sarah Huckabee Sanders, Rutledge’s opponent in the 2022 Republican primary for governor, undoubtedly would support all Rutledge’s extraterritorial legal adventures.