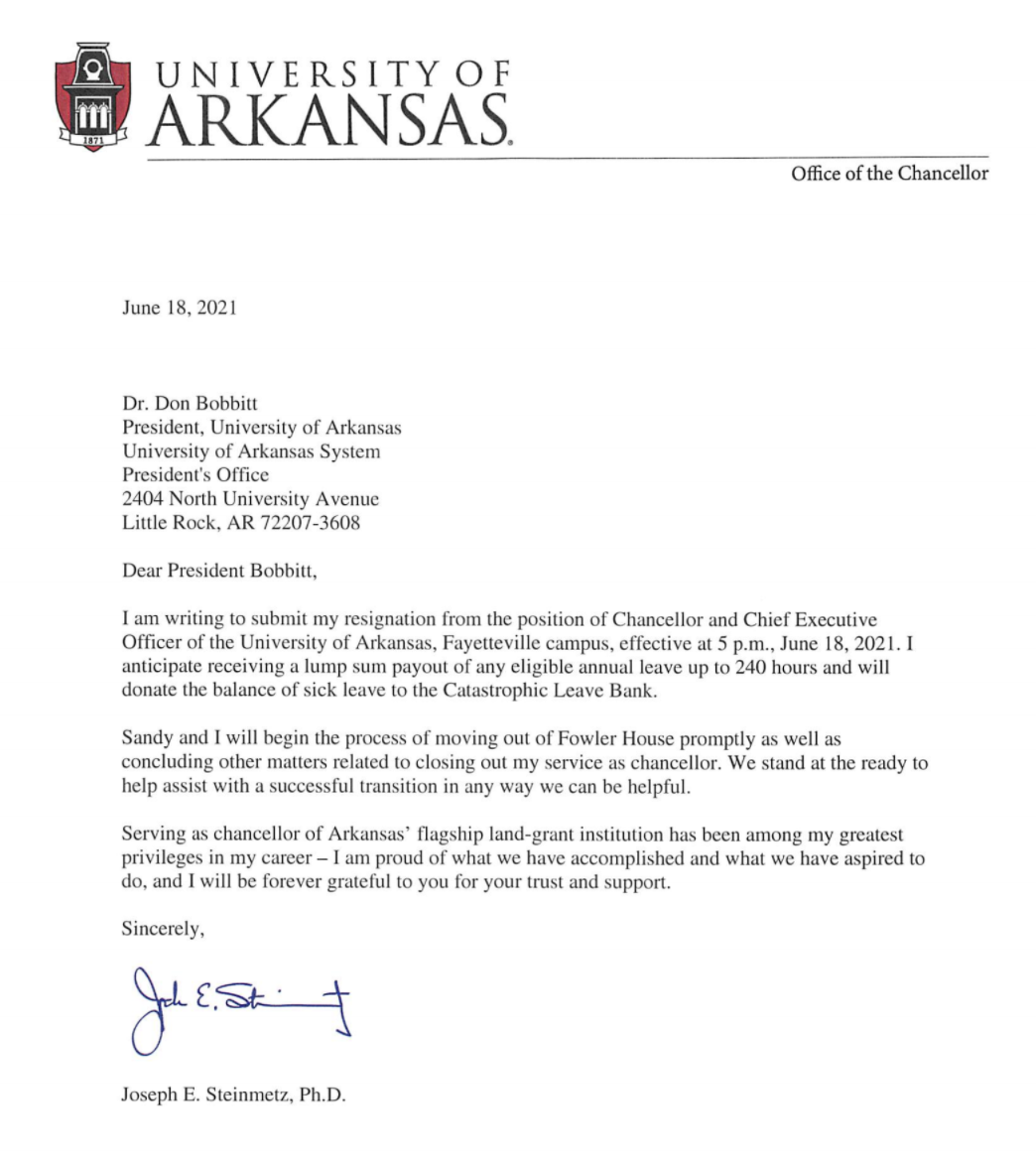 The University of Arkansas is remaining mum on the reasons for Joseph Steinmetz’s abrupt resignation today as the $714,000-a-year chancellor of its flagship campus in Fayetteville.

It did release his formal resignation letter. It says he will be moving out of the UA’s Fowler House “promptly” and expects as additional payment only up to 240 hours, or six weeks, of pay for accrued leave. His base pay of $464,000 (the rest is in deferred compensation) works out to almost $9,000 per week. He’s giving any accumulated sick leave to a leave bank.

The response from President Donald Babbitt was curt. 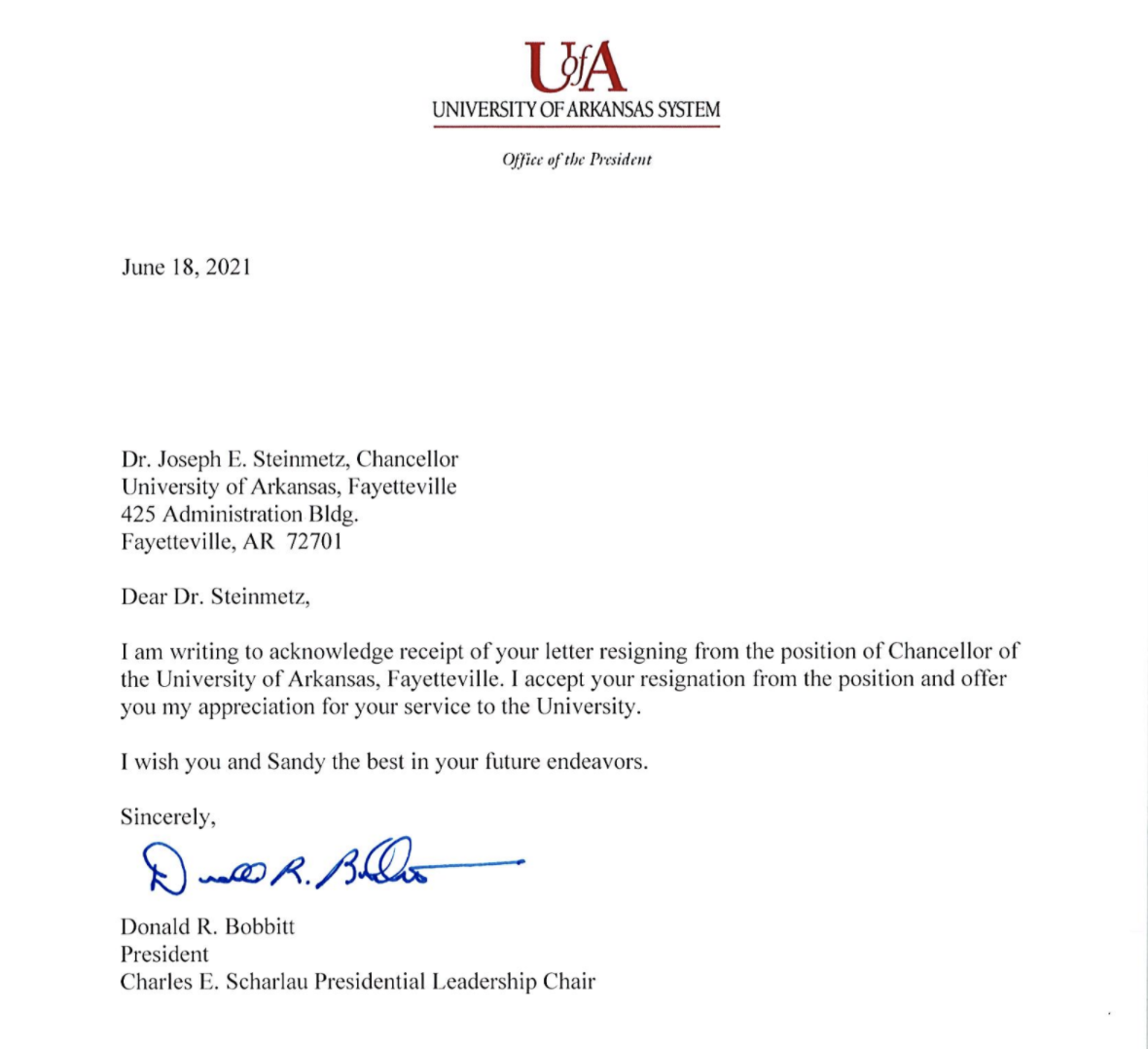 Steinmetz announced his departure late yesterday after a closed meeting of the UA Board of Trustees. He cited the “polarized” times, which has led to some speculation that his role in dealing with a debate over campus honors for former Sen. J. William Fulbright was a factor. I think it most likely that if it played a role — or any other controversial campus issue played a role — it was in encouraging enemies of Steinmetz to distribute potentially embarrassing social media content to multiple media outlets. One of them, KNWA, asked about the material it received and was told by campus spokesman Mark Rushing that it was fake.

Bobbitt appeared before the Legislative Council today and didn’t mention Steinmetz. He was there to be embarrassed by Rep. Jeff Wardlaw, who demanded a promise that the UA had indeed killed a land sale in East Arkansas that recent legislation prohibited. Bobbitt reiterated that the UA had a legal contract to sell the land and had been working to extricate itself, which ultimately happened. Wardlaw was offended at the UA suggestion that the law to prohibit the sale was unconstitutional, which it is.

Bobbitt must explain whether the departure was related to handling of his public duties.

UPDATE: I asked Fayetteville campus spokesman Mark Rushing today if he stood by his earlier response to KNWA when it asked about the social media content,

He said in that report the material was  an “obvious attack” on Steinmetz and a “hoax.”

His response to me:

Dr. Steinmetz has since resigned and as he stated last Friday, he continues to maintain that he is not the source of the postings. He says he has been considering resigning for some time in light of the difficult environment that he referred to in his resignation announcement. Further questions should be directed to the former chancellor

That, I replied, is not an answer to my question about his representation that the material was a “hoax.”

“This is all the information I have at this time, Max, but this is where we’re at: Dr. Steinmetz resigned on his own and provided his reasoning for it, the campus and former Chancellor Steinmetz have both addressed the issues and other swirling accusations and continue to do so, and the President has accepted the resignation and is moving forward with planning for the future leadership of the campus. I’ve passed along all I have to provide given the information we have right now with this quickly evolving situation the last few days.”

“Dr. Steinmetz has stated that it’s not him in the photos, that they were Photoshopped. “