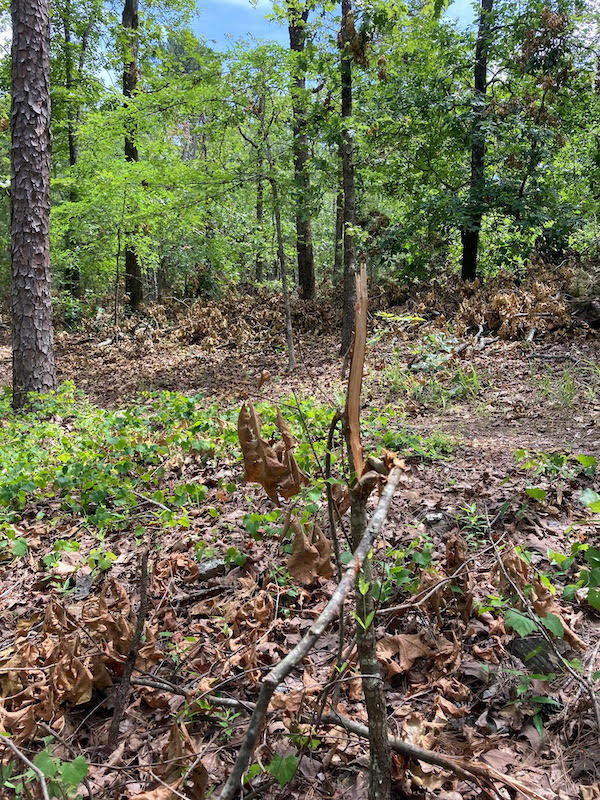 NOT COMING BACK: This photo is by Rhonda Patton of an understory tree in the area trimmed to improve a home owner’s view.

Rainey has claimed he was given permission to cut pines and top trees by a water utility employee years ago, but that has been disputed by a retired CAW employee and the widow of the executive Rainey said gave permission.

Rhonda Patton, who lives in the area and first saw the tree-cutting, including on Ouachita Trail right of way, has shared with me a note from CAW watershed manager. It says the water utility has completed an assessment of the damage and found 111 trees had either been damaged or removed. Using Corps of Engineers methods for assessing landscape value, she told Patton the value was nearly $110,000.

The utility must first wait for the completion of the sheriff’s report. Its attorney has said it favors a prosecution for criminal mischief, which could be concluded in part with restitution. If there is no criminal case, a civil action is a possibility. Rainey has told the board of the utility he’d like to resolve the issue.

Patton is keeping up pressure on water officials, with photos such as the one above. “This is a photo of one small tree that will not make it,” she wrote.  “THIS is the story of the understory.”