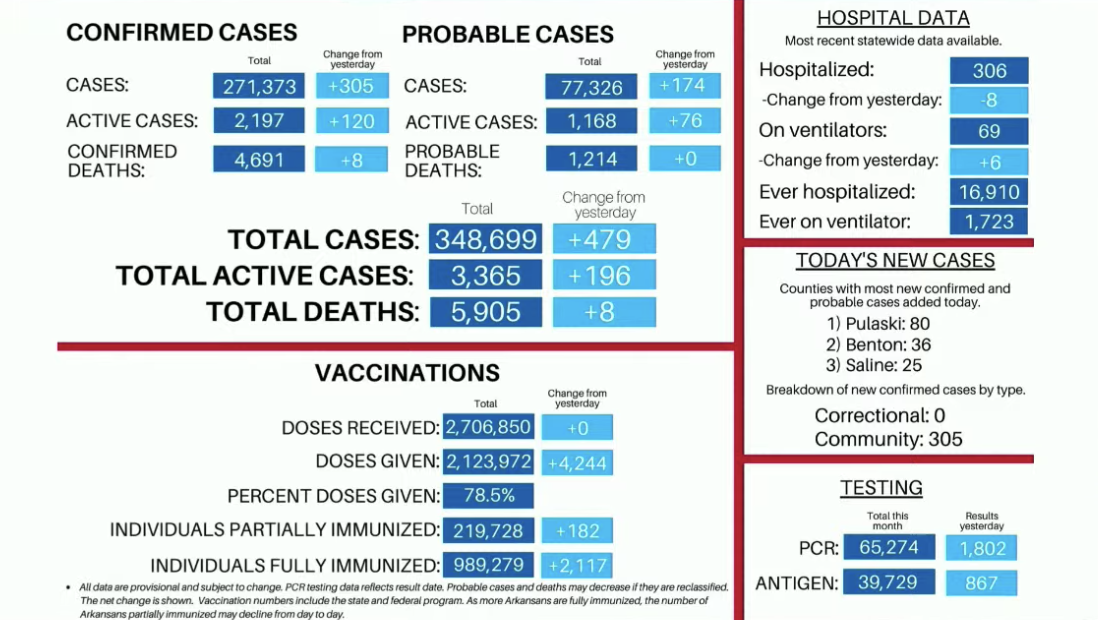 Governor Hutchinson’s weekly news briefing included more bad news on the virus front and an announcement that he wouldn’t send Arkansas state troopers to the Mexico border, as the governors of Texas and Arizona have asked.

He noted a continuing rise in the average number of new COVID-19 cases,  a decline in vaccinations rates and a rise in the number of seriously ill people. Hutchinson urged people as they celebrate July 4 to socially distance and wear masks if they are not vaccinated.

Arkansas may be at the beginning of the third surge of COVID-19, UAMS Chancellor Cam Patterson said.

The number seriously ill is worse, with more patients in need of ventilators, Patterson said.

He said more than half of new cases in Arkansas will be the Delta variant before long. It’s twice as easy to transmit and it attacks younger people with “much more severe” disease. He said the hospital is seeing more, younger patients with no other health complications with severe cases.

To assure those reluctant to get the shot, Patterson said there are 300 people in hospitals sick with COVID and not a single patient suffering from the effects of the vaccine. It is safe, Patterson said.

Hutchinson noted that more than 98 percent of those hospitalized and 99 percent of deaths were people who have not been fully vaccinated. “Statistics and science tell the story of what needs to be done.”

Troops to the border

Hutchinson said, as we reported over the weekend, that he’d talked with the State Police about the trooper request. “Because of pubic safety needs we have in Arkansas and because of important work they are doing here, I will not be sending State Police to the border.”

He said he had asked the National Guard to evaluate what might be involved in sending Guard members. He acknowledged the state had sent the Guard to Texas before, but at the request of the president. “That option is still open,” he said.

He said the situation is “worse right now” than when troops had been sent before. “But when you don’t have federal authorization, you have to worry about the chain of command and whether the right protocols are in place and what the work would be and whether we have the expertise to provide assistance.”

Hutchinson said he saw no need for a change in the state’s COVID-19 strategy. It is to make vaccine accessible and encourage more people to get a shot. “I don’t think there’s much more than the government can do except to be honest with everyone.” The Delta is a “reality check” and should encourage people to get a shot. But he said he saw no need for an emergency declaration. “We are managing it; we are working it.”

Patterson said UAMS residents had tested positive, a number is in “the low teens.” They were mostly asymptomatic or had minor illnesses, and most had been at least partially vaccinated, he said.

Hutchinson was asked why weekend COVID-19 numbers weren’t released until today. He said the batch should have been released Monday. But he said the weekend reports will be discontinued to relieve stress on the Health Department staff and he said most states have reduced reporting. He said there’ll be daily reporting and weekend catchup on Monday.

He said the incentives for shots — lottery tickets and game and fish permits — had not been effective and would be wound do.

News of no official California travel to Arkansas because of our anti-LGBTQ laws? “Not a significant factor,” the governor said. “You just sort of shrug your shoulders at California.” He said the action was only punitive to California.

He said the NCAA threat to act against discriminatory states had “proven not to be consequential at all.” He said he and some business leaders had concerns about some of the laws the state passed, but the state overcomes that by showing the diversity of the Arkansas population. He defended his signing of the bill to prevent transgender women from participating in athletics. He said it was right for the time. As yet, no case of a trans woman seeking to participate in sports has surfaced at any level in Arkansas.

Hutchinson was asked about concerns for students returning to class. He said he was concerned if students were not in class, though he’d early said only 39 percent of the total Arkansas population had been vaccinated and Patterson had talked of the potential for harm to younger people from the developing variant.

The governor revealed he’d ask for an adjustment to the state revenue forecast when the fiscal year ends Wednesday in light of a billion-dollar surplus. He will transfer $86 million to the Medicaid trust fund, to make it stronger, but the long-term reserve will still be $1.2 billion.

The charts on the daily average of new cases and vaccination both trend in the wrong direction. 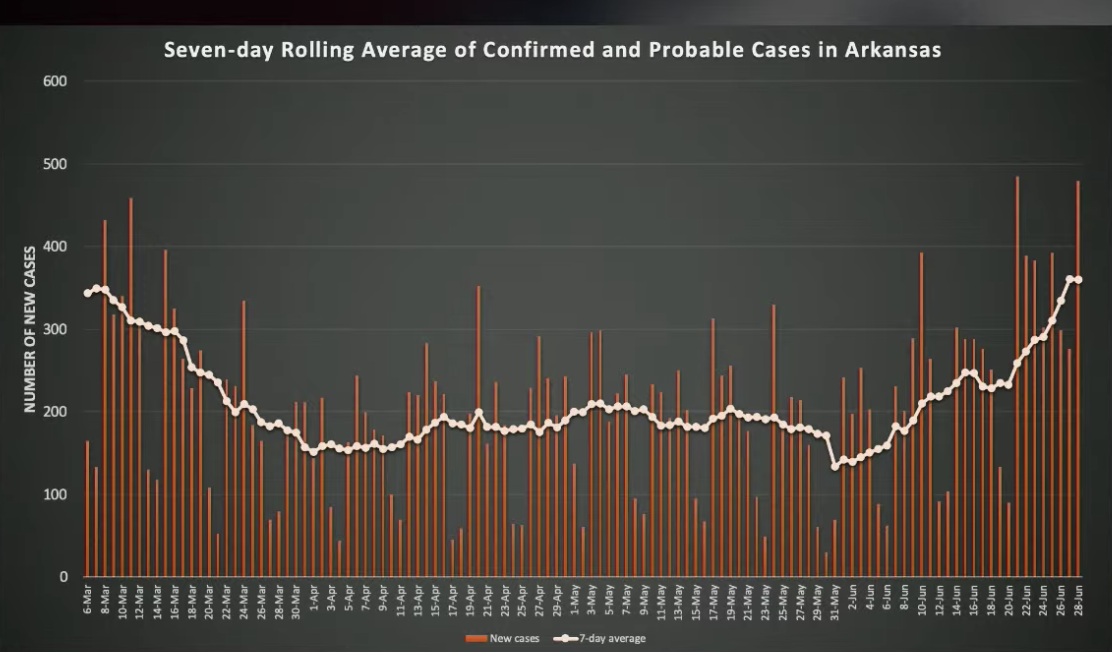 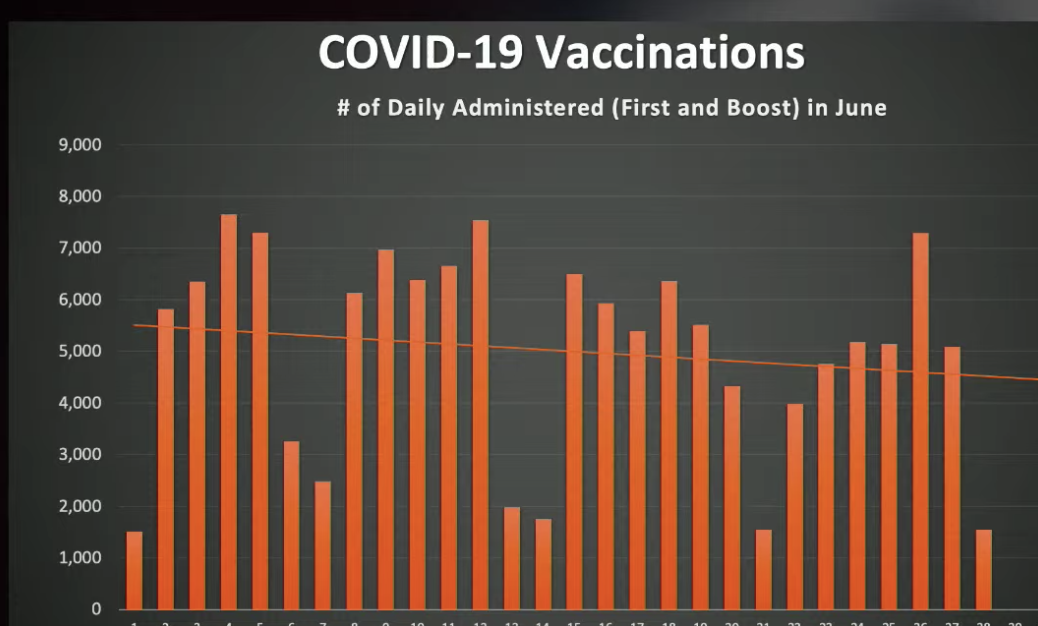