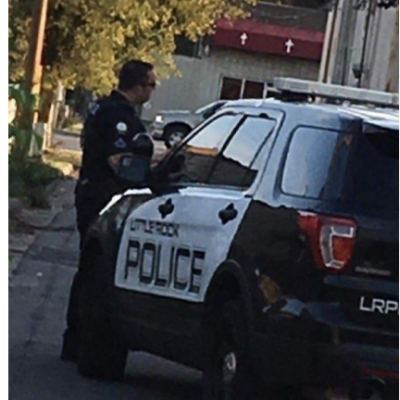 AT THE SCENE: One of the photos taken by City Director Kenneth Richardson that led to his arrest.

The suit also names the city and Police Chief Keith Humphrey as defendants. It says Richardson’s constitutional rights were violated when Alexander handcuffed him and charged him after Richardson refused to stop taking photos and to leave the scene of Alexander’s encounter with a suspect on a drive between a Kroger store on Col. Glenn and an adjacent apartment complex. He also says in the suit that the incident illustrates police use of excessive force and covering up actions with “meaningless” internal investigations.

The charge against Richardson was dropped. Absent suspension or firing, we cannot know under the law whether Alexander was reprimanded or perhaps praised for his handling of Richardson that day.

It seeks unspecified actual damages, punitive damages and fees for his attorney, Willard Proctor. It notes the city participates in a Municipal League insurance program that provides coverage for adverse outcomes in civil rights lawsuits.

The suit recounts the city’s losing argument before a federal appellate court in defense of the similar handcuffing and charging of the civil rights lawyer John Walker for observing a police arrest.

In the Eighth Circuit, no reasonable officer could conclude that a citizen’s passive observation of a police-citizen interaction from a distance was criminal.

Other cases uphold the right to record police activity, the suit says.

The suit accuses Sullivan of abridging constitutional rights and of battery. It accuses the chief and the city of permitting a “widespread custom” of excessive force.

The case was assigned to Judge Morgan “Chip” Welch. No trial has been scheduled.