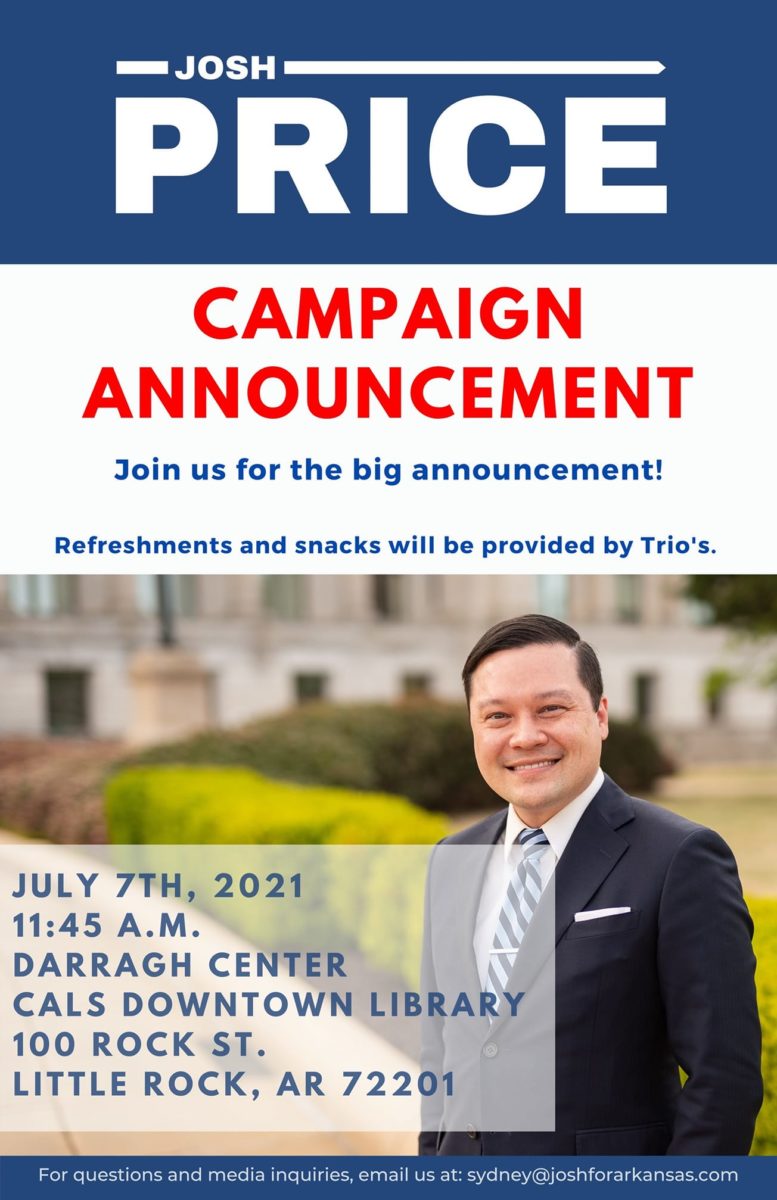 Price was a steady and informed hand in the face of the Republican takeover last year of election machinery in Pulaski County and Arkansas. Republican Secretary of State John Thurston is seeking re-election. Republican state Rep. Mark Lowery, a key architect of GOP vote suppression legislation, is challenging him in the primary.

Price, who has worked for the Small Business Administration and the Delta Regional Authority, said on Facebook:

Over this last year overseeing the General Election as a Pulaski County Election Commissioner and working with small business owners from across the state who needed funding during the pandemic, I have seen a lot of gaps… and I’ve also identified ways to make improvements to help all Arkansans. I can no longer sit idly by and wait for change to happen. As JFK and John Lewis said, “If not us, who? If not now, when?” I have to be the change I hope to see… and the time is now.

UPDATE: From his release:

I’m running for Secretary of State to protect the voting rights of all Arkansans,” said Price. “Out of touch politicians are making it harder for people to vote. That’s just not right. Rural voters, seniors, single mothers, working-class Arkansans – they’re all facing new hurdles to exercising their American right to vote.”

“I’ve served as a Pulaski County Election Commissioner. I know what it takes to run large elections smoothly and fairly. As Secretary of State I will fight to protect the fundamental right of all Arkansans to make their voices heard, whether they live in a big city or a small town like Delight.”

Josh Price, a true son of Arkansas, was born in Southwest Arkansas, the son of a small business owner and a nurse. Josh grew up in Delight in a family with deep Arkansas roots and a commitment to public service.

Josh is nationally recognized for his work on running smooth and fair elections. Josh served as Election Commissioner for Pulaski County, helping oversee Arkansas’s largest county’s elections. In this role, Josh expanded voter access by opening additional early voting locations, replaced 20-year-old voting machines, and personally trained hundreds of poll workers during the pandemic. Josh was the first Asian-American to serve in this position and was one of only four AAPI government officials in Arkansas at the time.

Josh has extensive experience in the private and public sector. Josh recently worked at the U.S Small Business Administration where he served as the Public Information Officer for Arkansas helping numerous small businesses during the pandemic economic slowdown. He is currently a small business consultant.

Josh previously served as the Digital Communications Director and Policy Advisor for the Delta Regional Authority, an independent federal agency, where he oversaw social media outreach to 10 million Americans and worked with Governors in an 8-state region to help improve the lives of citizens in the Delta states. As the Director of Development of the University of Arkansas – Pulaski Technical College Foundation, Josh helped raise $8.8 million in grants to advance STEM education, workforce training, and entrepreneurship in Arkansas.

Josh graduated from the University of Central Arkansas with a Bachelor of Science in Sociology. He currently lives in Maumelle.