As the backlash to President Trump continues unabated, Democrats are poised to make gains in the Arkansas Senate for the first time since 1998. With 20 of the chamber’s 35 seats on the ballot this year, the state’s minority party should expect to win eight of them. The latest modeling run from political and data scientist John Ray and digital strategist Jesse Bacon shows Democrats flipping three GOP-held seats and holding all five of their own in 2018. Bacon, Ray and I expect Democrats to hold districts 4, 10, 24, 30, and 31 and to flip districts 19, 20 and 35 — though only one of those (District 35) has an announced challenger thus far (Maureen Skinner). With Republicans but a seat away from wielding a supermajority in the Senate, any ability to make inroads should be viewed as significant for the state’s resurgent opposition party — even if it leaves the GOP with a 23-12 advantage, as our model expects.

A crucial difference between the results of our first House and Senate simulations lies in the competitiveness of each legislative chamber. For instance, we estimate that 57 of the state’s House seats are truly safe — 25 for Democrats and 32 for Republicans. Forty-three of the chamber’s 100 seats are reasonably competitive, 23 of which have no clear lean toward one party or the other (we termed these tossups in my last column). In the Senate, every one of the 20 seats on the ballot this year are considered safe — eight for Democrats and 12 for Republicans, though three of those “safe” Democratic seats are held by Republicans. This lack of competitiveness is borne out by the Senate’s recent electoral history: 15 of 18 seats went unchallenged in 2014, 11 of 14 in 2016, and, thus far, 15 of 20 seats on the 2018 ballot are uncontested. It’s hard to model competition where political monopolies persist.

Though I’ll dig into the mechanics of our work more in my next column, our simulation models are based on the 169 state house and 52 state senate races held since Nov. 8, 2016 — the full down-ballot record of the Trump era. The majority of those races have been held in places traditionally considered hostile to Democrats: the rural, exurban and suburban state legislative districts of the South and Midwest. Yet in the 221 state legislative races of the Trump era, Democrats have over-performed by an average of 24 points in state senate races and 23 points in state houses races. Put another way, the average Democratic state legislative candidate received 24 more points from the candidate’s district’s voters than his or her most immediate predecessor. Arkansas has unquestionably lurched rightward over the last decade. But it’s unlikely that the GOP’s unilateral control of state government will be insulated from a wave election of this scale. 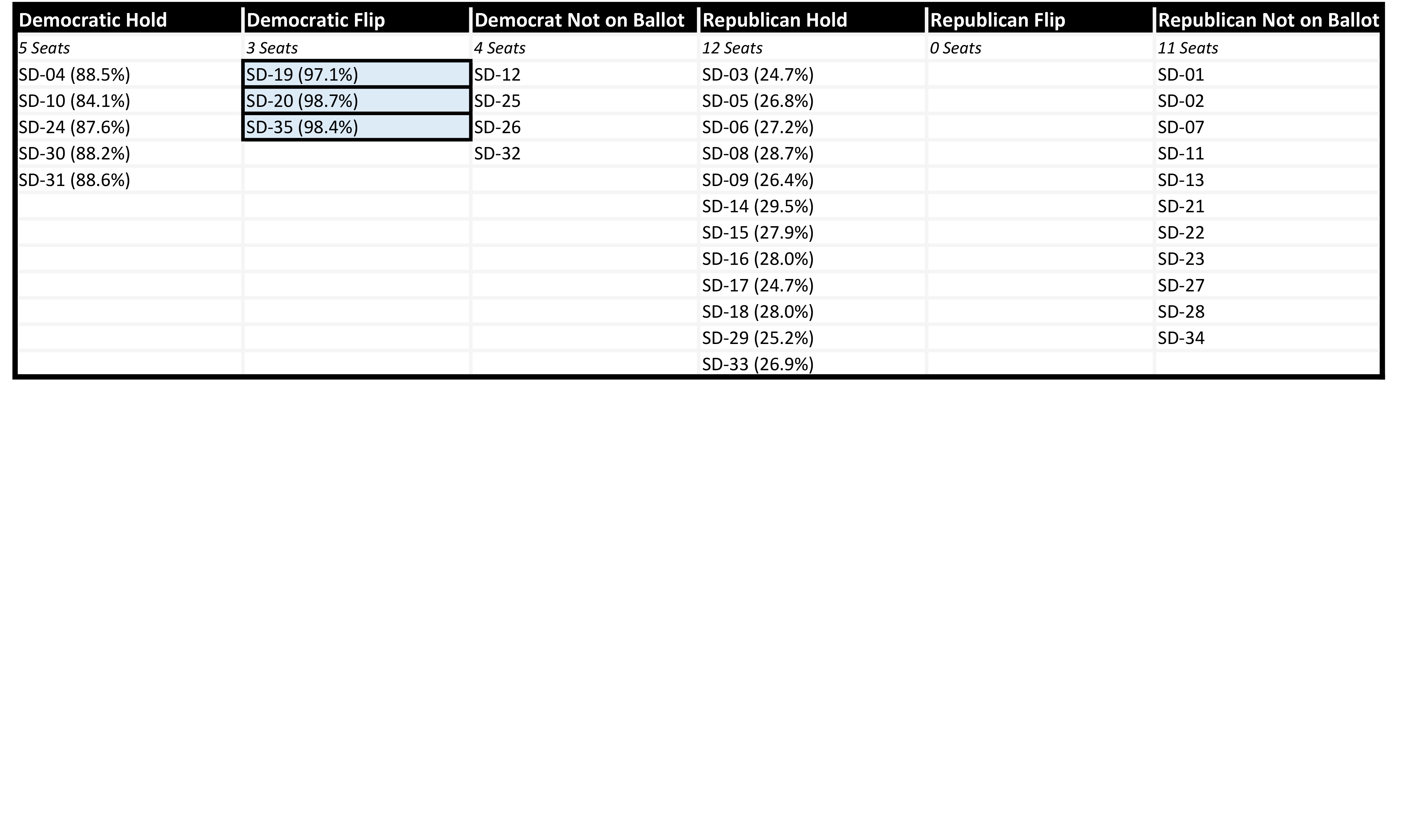 The state’s conventional political wisdom — recently delivered to me via Twitter where, I assume, a few conservative partisan hacks sense that, for the first time in their adult lives, the wind is no longer at the backs of the Republican Party — would likely tell us that most of the 15 Senate seats without a challenger should remain that way. They aren’t winnable, the cynics and the pundits say. But as groups like Run for Something showed in Virginia and the Indivisible Project has illuminated nearly everywhere else, no one really knows what can happen if you invest in running good candidates and good campaigns everywhere — that if you invest in people and risk-taking instead of geography and recent history, all bets are off.

Nowhere is this more evident than in the Arkansas Senate, where most incumbents have never faced a serious challenge. We intentionally omitted measures of candidate quality in this modeling run, though we’ll find ways to incorporate it once filings close March 1 and we can fully consider each race. When we do, it’s likely that we’ll buck conventional wisdom once again by treating the chamber’s lack of competitiveness as a liability for incumbents. After all, the lack of competition — a cornerstone of conservative ideology — allows fundraising and grassroots networks to atrophy. It leaves candidates unpolished and ill-prepared for the great retail spectacle that still dominates Arkansas’s political culture. It leaves them vulnerable to good candidates who run good campaigns, and who position themselves as the right person at the right time to represent their district.

In a state beset by the nation’s sixth-highest poverty rate and second-lowest median income, perhaps time has run out on the old guard of country club candidates whose sole answer to the state’s greatest social and economic challenges is to once again cut taxes on the rich. Perhaps the time has come for Arkansas’s legislative monopoly to be broken. Perhaps the time has come to challenge every seat, everywhere, no matter the odds.