President Trump is historically unpopular — even in Arkansas. My colleagues John Ray and Jesse Bacon and I estimate, in the first analysis of its kind for the 2018 election season, that the president’s waning popularity isn’t limited to coastal cities and states. The erosion of his electoral coalition has spread to The Natural State, extending far beyond the college towns and urban centers that voted for Hillary Clinton in 2016. From El Dorado to Sherwood, Fayetteville to Hot Springs, the president’s approval rating is waning.

Using a statistical method known as multilevel regression with post-stratification (more on it below), we estimate that Trump’s approval is now below 50 percent is nearly half of Arkansas’s 135 state legislative districts. In the House of Representatives, he is underwater in 42 districts — 20 of which are held by a Republican lawmaker. Fourteen seats in the state Senate are also below the 50 percent threshold, though none of those held by the GOP will appear on the 2018 ballot. 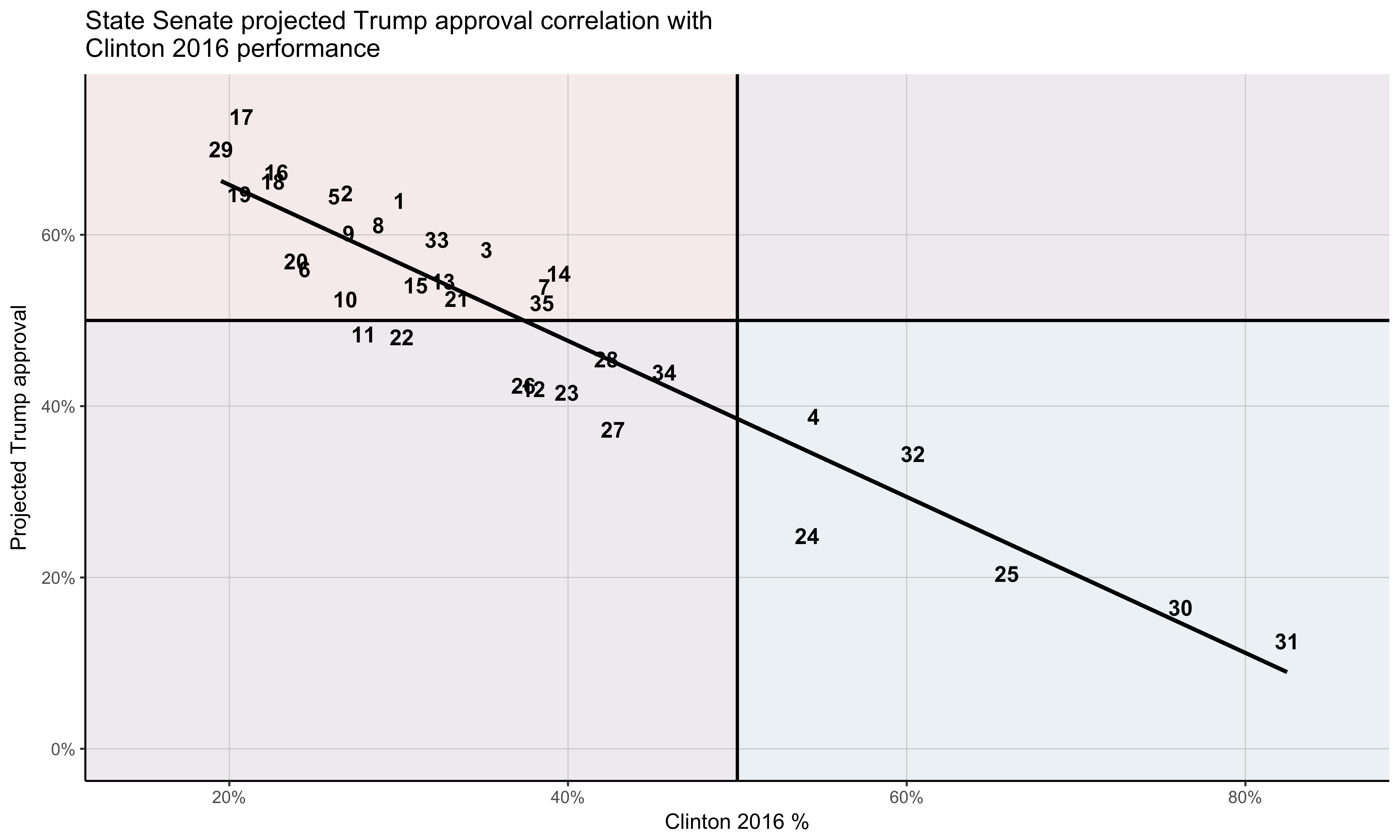 Nine new target districts arose from our analysis of the president’s approval rating. They include House Districts 1 (Texarkana), 3 (Hope), 4 (De Queen), 6 (Camden), 8 (Warren), 13 (Stuttgart), 14 (Lonoke), 19 (Nashville) and 32 (Little Rock). It appears as if the toxicity and stunning ability of Trump to repel the very voters who carried him into office knows few, if any, bounds.

To produce these district-level estimates, we began by taking statewide data on the president’s approval rating, 2016 voting breakdowns and demographic data from University of Arkansas professor Janine Parry’s Arkansas Poll. We then linked that information to district-level demographic data from the census, a process that involved significant computing power and some educated guesswork to properly calibrate. Like our previous work in the Arkansas Times, it isn’t perfect, but it’s better than the nonexistent status quo.

Because we’re nerds, we used the same method to approximate the Clinton-Trump vote share by legislative district as well. Though this information will eventually be available without the need for estimates like ours, the outlets that typically assemble and make it publicly available are struggling to navigate the byzantine county election commission reporting structure in Arkansas. We found that Clinton broke the 50 percent threshold in only 17 state house districts, only one of which — HD 49 — is under water in its Trump approval rating.

So what does this mean for Arkansas’s 2018 elections? The most important takeaway from this analysis is that the state’s legislative races could be far more competitive than conventional wisdom suggests. Arkansas regularly ranks low in measures of electoral competitiveness, as many of its candidates go unchallenged. We suspect that this has less to do with a dearth of good candidates in Arkansas and more to do with the proclivity of its chattering class to assert that they alone know which districts are winnable, which candidates are viable and which campaign strategies are optimal. If nothing else, these results tell us that Arkansas is not the uniformly red, politically unsalvageable state that the national parties tend to paint it as.

The state’s Democratic Party is already capitalizing on the quiet competitiveness of Arkansas’s state legislature. It’s fielding candidates in 45 districts — including 21 districts held by Republicans — for 100 seats in the House of Representatives with nearly three weeks left until filing closes. If it can close strong and replicate the recruiting success of state parties in Ohio (fielding 99 candidates for 99 House seats) and Virginia (fielded 88 candidates for 100 House seats), the blue wave may do more than make a dent in Arkansas: It may flip the whole state..