If Arkansas joins the red state revolt this November, it will be because the slate of young, first-time Democratic candidates vastly outperformed Hillary Clinton on the ballot. Using the same multilevel regression with post-stratification (MRP) method we used to calculate President Trump’s district-level approval rating, John Ray, Jesse Bacon and I estimate that Secretary Clinton carried a 17 state House districts — only one of which is currently held by a Republican lawmaker (HD-49). Even President Obama won more districts (31) in 2012. The utter, complete erosion of the state’s Democratic base may have finally reached its nadir. All that’s left now is the task of rebuilding.

There are some important caveats to our analysis. One is that Secretary Clinton was never a popular figure in Arkansas — not as First Lady, senator, secretary of state or presidential nominee. We weren’t surprised to see how poorly she fared in a state that never truly embraced her — one in which the Attorney General Leslie Rutledge saw fit to build her Republican National Convention speech around vital issues of national security and economic opportunity like Clinton’s New York accent.

Most important, the Democratic Party of Arkansas failed to recruit a full slate of candidates for the 2016 election cycle. The party ran candidates in only 49 of 100 House districts, one of four congressional districts, and, for its lone statewide candidate, raised roughly one-fourth of what Sen. Mark Pryor and then-U.S. Rep. Tom Cotton each raised in their 2014 campaigns. You don’t need a complicated model to know that it’s hard to win an election without a candidate.

As filing for the 2018 cycle comes to a close, the prospects for a Democratic revival are as bright as they’ve ever been. Arkansas Democrats are already fielding candidates in 57 House Districts, 33 of whom are running for seats currently held by Republicans. The party is also fielding a full slate of Congressional candidates and contesting 4 of 7 state constitutional offices. They haven’t challenged that many sitting Republicans since at least 2008. 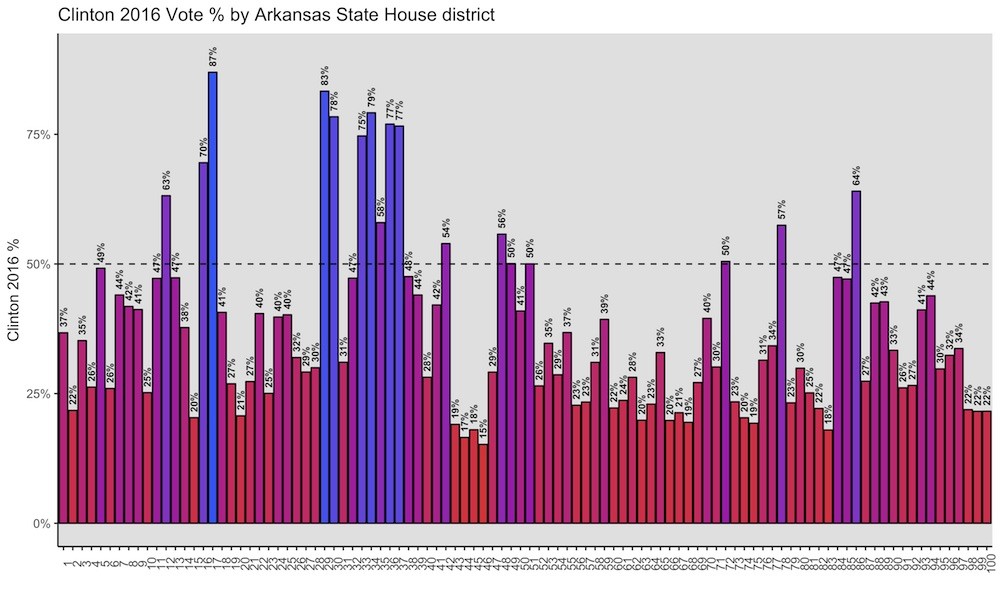 Still, whatever blue wave arrives in Arkansas this November, it won’t reach its potential without more candidates. In our analysis of the state’s 100 House Districts, we estimated the Democratic win probability for each seat and identified a set of recruiting targets for the fall. But of the 24 Republican-held districts we found most vulnerable, only 13 have an announced Democratic candidate. Though Democrats must net only two seats to break the Republican supermajority — and force Republicans to demonstrate some shred of bipartisanship — in the House, wave elections are the best way to begin clawing back the power they lost during President Obama’s time in office. Challenging a hair more than half of the seats on the ballot isn’t going to do it.

In other states, full candidate slates are being fielded for the first time this century. Ohio’s Democratic Party is fielding candidates in all 99 state house districts this year. Virginia’s Democratic Party put 88 candidates on the ballot for 100 house seats last year, resulting in an historic pickup of 15 seats and brought them within a coin flip of retaking the chamber. Arkansas Democrats can and must find a way to replicate their recruiting success.

In this regard, the party can begin by taking a page from the group Run for Something. Its theory of change in down-ballot, state legislative races is that everything we think we knew about what districts are winnable, which candidates are viable, and which campaign tactics are effective has to be thrown out. As their founder, Amanda Litman, tweets nearly every day, Run for Something invests in talent, not geography.

The same is true of Indivisible 435, the movement’s political wing that, in the first line of its description, rightly asserts that “every year, campaigns make the choice to write off whole swaths of the country as unwinnable. We’re here to say that’s no longer acceptable.” Only in Northwest Arkansas, where a full slate of candidates has already filed, is it clear that these are being realized.

Often times, the greatest obstacle to the kind of transformative change we need is the limit of our own imagination. Few imagined a world in which Donald Trump could win a presidential election. Fewer still imagined that an error-riddled Google Document written in bars and living room floors would grow into the political force Indivisible has become. Few, if any, can imagine a path back to power for Democrats in Arkansas. But it’s there, ready to be if only we’d look beyond the limits of our cynical imaginations and, instead, and bet everything on the hope, power, and aspirations of its people to realize the change the state so desperately needs.