No swill for this swine party. Knob Creek is the presenting sponsor at the Arkansas Times’ second annual Pig & Swig event, which takes place 6-9 p.m. Friday, June 15, at the Heifer Village. Get tickets at arktimes.com/pig.

At Pig & Swig, you’ll be able to sample not only Knob Creek, but also Knob Creek Single Barrel, Knob Creek Rye, Jim Beam Black and Basil Hayden — either straight or in cocktail form. Plus, there’ll be all sorts of delish food from @ the Corner, Buffalo Wild Wings, the Cafe @ Heifer, Old Chicago Pizza & Taproom, The Pizzeria, The Root Cafe, South on Main, Southern Table, TAE and Whole Hog Cafe in North Little Rock.

Adam Harris is North American whiskey ambassador for Beam Suntory, the global spirits company that owns all the brands that’ll be featured at Pig & Swig.

He says Jim Beam Black (aged six years minimum and bottled at 86 proof) has long been the preferred bourbon for folks who work at the Beam distillery. “It’s a great day-to-day whiskey. For a lot of us in the know, that was our preferred whiskey, and it was kind of our best-kept secret until it won the Best Bourbon at the International Wine & Spirit Competition in 2016.”

Basil Hayden and Knob Creek are small-batch bourbons, a category F. Booker Noe II, the late master distiller of Jim Beam and grandson of Jim Beam, popularized in the late 1980s and early ’90s. A batch of Jim Beam White Label might be made from 1,000 barrels of bourbon. For Basil Hayden and Knob Creek, a batch might be made from anywhere from a couple to several hundred barrels. For a company that produces millions of barrels of whiskey per year “that’s a very small batch,” Harris said. Basil Hayden is high-rye bourbon; it uses almost twice the amount of rye in the mash while adhering to legal standards that dictate how bourbon is made. Harris knows those standards by heart and how they came to be.

“[The standards] were set forth in 1964 in the code of federal regulations … under Lyndon Johnson. He was a big bourbon fan, and he wanted us to have a spirit that was recognized as the official spirit of the United States. Congress agreed and we claimed it.”

The rules codified what was already popular practice, Harris said.

So Basil Hayden meets the 51 percent corn requirement, but with an extra shot of rye, which lends it an “elegant spice” Harris said. Basil Hayden (80 proof) and Jim Beam Black (86 proof) are great day-drinkers, Harris said.

Knob Creek (100 proof), on the other hand, is “big, full-flavor bourbon,” Harris said. It has hints of “vanilla and caramel and a little bit of spiciness and smoke.” You get a similar flavor profile with Knob Creek Rye (100 proof), but instead of vanilla and caramel, it has spicy flavors. With single-barrel Knob Creek, aged 10 to 13 years, you get 120 proof. It’s a “non-chill filtered whiskey,” which means distillers “don’t filter the fatty acids,” Harris said. That adds a lot of . “Have a single-barrel Knob Creek on the rocks to cap off a great day and have someone drive you home,” he recommended. 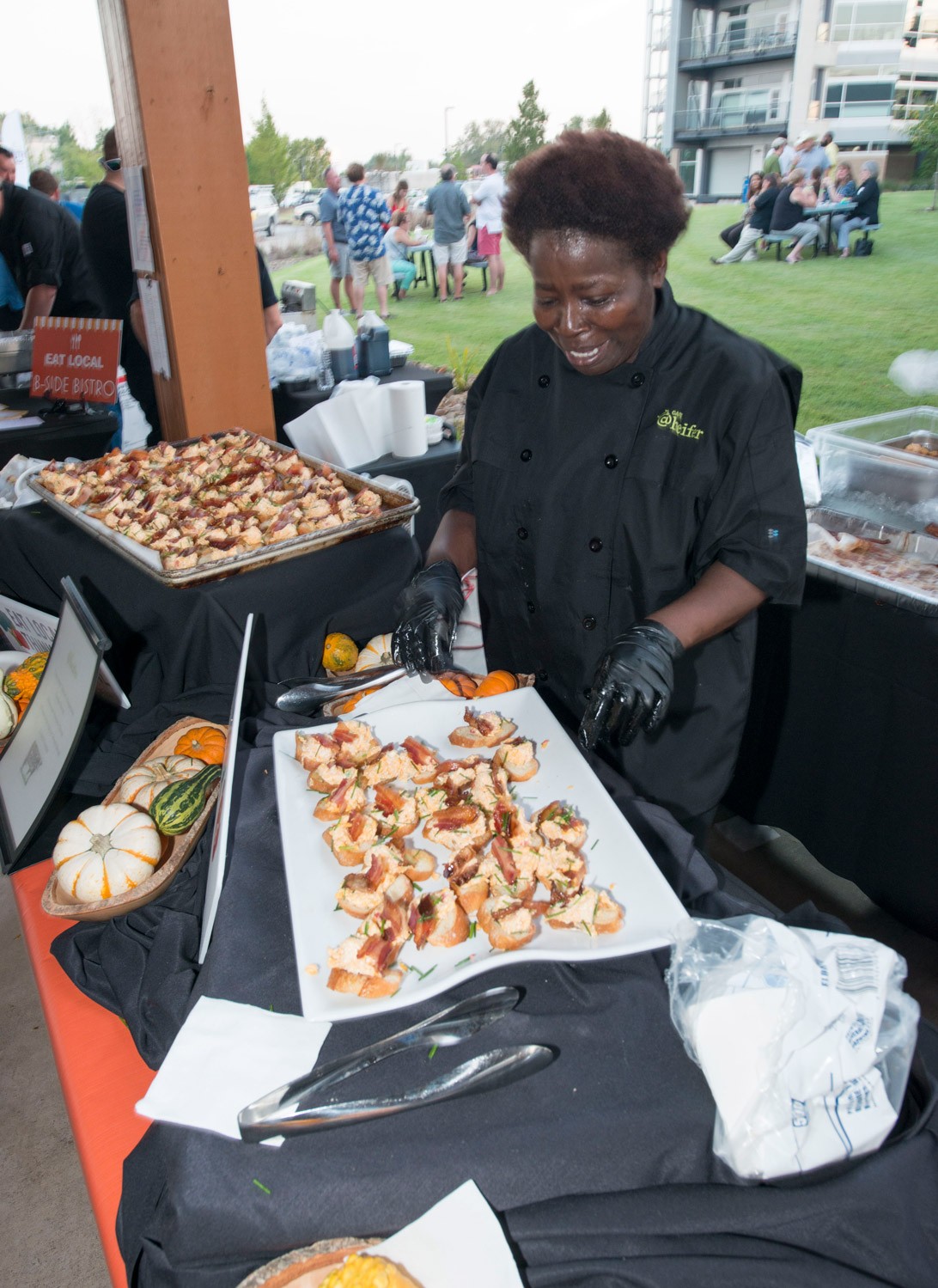 Meanwhile, there’ll be plenty to nosh on, too. South on Main will serve pork boudin made from Grassroots Farmers Cooperative pork, along with mustard seeds and fresh red onions. The Root Cafe will dish up pork adobo with cornbread and dilly scapes (pickled garlic scapes) and barbecued jackfruit (which looks and tastes a lot like pork) for the vegetarians. Southern Table will serve its handmade Sicilian sausage. Old Chicago will have its Double Deckeroni pizza, covered with a double dose of pepperoni, hot sauce parsley. TAE (True Arkansas Eatery), the soon-to-open restaurant from Justin Patterson (The Southern Gourmasian), will dish up pork belly with watermelon mint salsa. Local “Grass Roots” bratwurst sliders with “Great Ferments” crunchy sauerkraut and stone-ground mustard are on the menu from Cafe @ Heifer. Hog will have pulled-pork barbecue sliders on hand. Several of the participating restaurants were still sorting out their plans at press time.

The seven-piece party band Dizzy 7, featuring the Arkansas Times’ own Roland Gladden, will be playing all the songs you know and love.