Barbecue people are hardliners. There’s no nuance for a pitmaster when it comes to a choice of wood chips, for example, and a perennial brisket question — “Fat side up or fat side down?” — generally triggers an unswerving one-word answer. For the most part, Darby Neaves of Naaman’s Championship BBQ is no exception: The menu at Naaman’s joint staunchly condemns the idea of chopped meat. It features exactly one dessert. A styled advertisement for Naaman’s circa 2012 shouts: “Words have meaning! ‘Championship’ is not an adjective!”

There is, though, one hard line on which Neaves vacillates: the border between Arkansas and Texas. In 2012, Neaves took the devout following he’d amassed at his Ashdown location in Little River County, leased a kitschy station in downtown Texarkana and began serving barbecue on the Texas side of State Line Avenue, prepared in a commercial kitchen seven miles north in Ogden (Little River County) and transported to a food truck parked alongside the building.

The ticker tape of Yelp, Tripadvisor and Facebook reviews of Naaman’s is a stream of superlatives. “I give this five stars because I can’t give it 30,” one reviewer wrote in 2016. A New Zealander on a tour of the American South called the brisket at Naaman’s “life-changing.” Another disciple purports to have written his review just after leaving another BBQ establishment in Mesquite, Texas: “Why have you set the bar so high, Naaman’s? Why?” 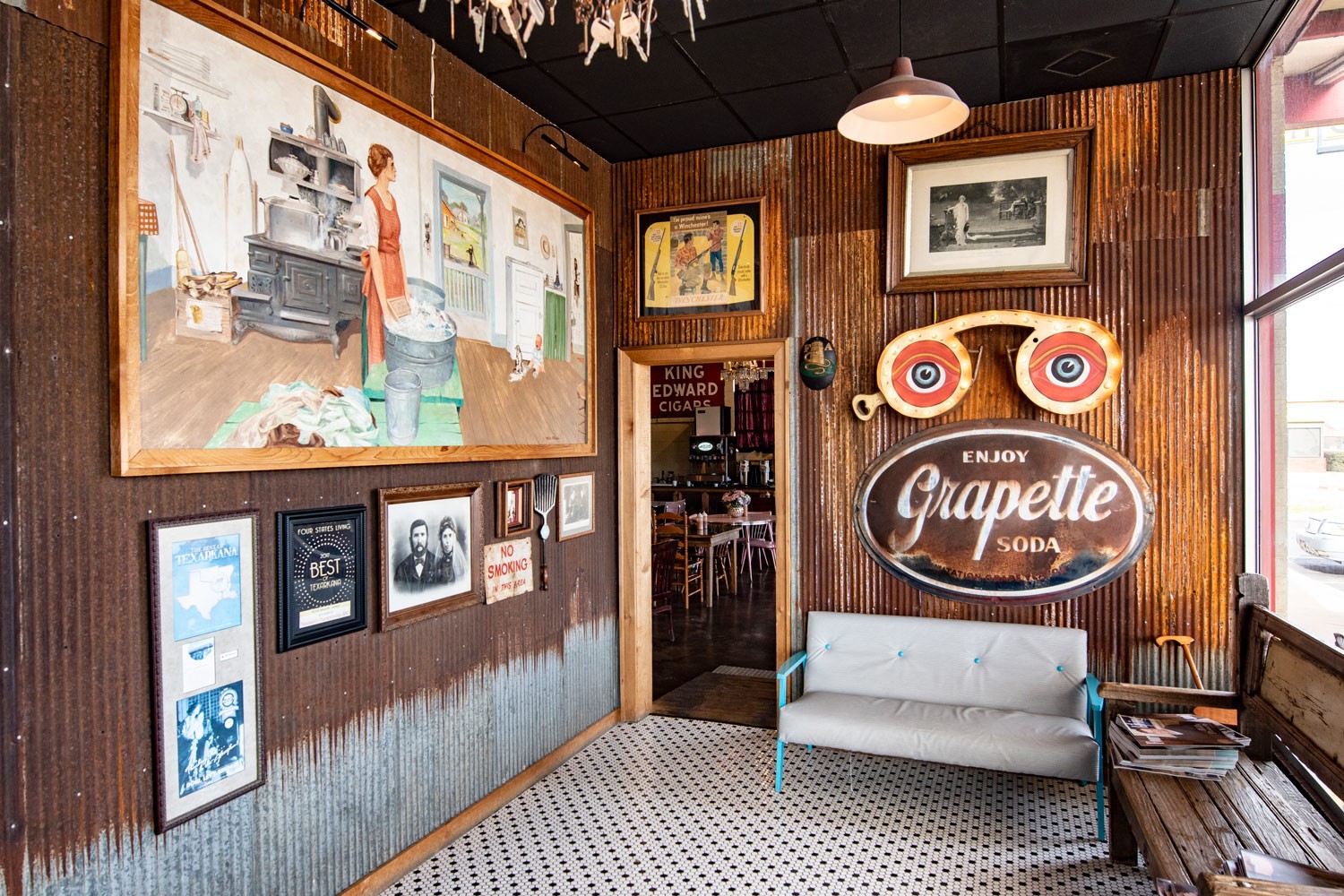 Hyperbolic praise, to be sure, but it’s not exactly unwarranted. The meat selection at Naaman’s is beef-forward — a nod to the Lone Star State’s signature emphasis — and an exercise in why the best barbecue doesn’t need sauce: succulent hand-trimmed ribs, woodsy medallions of smoked chicken breast, feathery pulled pork, and sausage packed in-house from pork shoulder and Angus brisket. That litmus test of all smoke savvy — the sliced, unadorned brisket — is a delicacy in the same tradition as the exemplary Pecan Lodge (Dallas) or Franklin’s (Austin, Texas), encased in thin, brown rubble, sporting a subtle rose-colored smoke ring and ready to fall apart at a fork’s slightest provocation. (I recall, just after my first bite, looking around frantically to be sure there were no children within earshot, as an especially earthy expletive had escaped my lips rather involuntarily.)

Purists and serious barbecue competitors don’t like to talk about sides, but if they land at Naaman’s, they probably should. The baked beans are for anyone who thought they hated baked beans: meaty, with no cloying sweetness. There’s a piquant potato salad, hearty macaroni and cheese, twice-baked potatoes and a Thanksgiving-worthy rice and corn casserole called, unpretentiously, Cheesy Corn. All are house-made, as is the solitary star of the post-dinner moment: a barely sweetened, solid-state wedge of cheesecake so dense and hefty the thin graham-cracker crust and available-for-an-upcharge toppings (caramel, chocolate, pecans or any combination thereof) are reduced to peripheral, decorative roles.

Now, armed with a fiercely loyal customer base and hours of training time logged in high-end kitchens in New York and Detroit, Neaves is relocating Naaman’s to a former Pizza Inn building right across the street from his current digs — and therefore, from Texas back to The Natural State. On the cloudy morning of New Year’s Eve 2018, the construction site was quiet, but evidence of the project was abundant nonetheless: a Bobcat excavator in repose, a pile of natural stone stacked neatly in a block and a patio in stately mint-condition cedar, flanked by a rustic corrugated steel overhang.

At 11 a.m. that day, Naaman’s Texas-side spot was already beginning to buzz, white-collar workers filing in under the five-gallon buckets strung along the perimeter of the patio canopy — the Naaman’s logo on one side and a “Real Q” stamp on the other. After dark, the buckets — each of which has a sturdy electrical cord snaking out of its lid — double as mood lighting. Patrons broadcast their statuses as regulars by way of body language: beelines to favorite tables were made, sans any hesitation at the dining room door entryway to survey the scene. Every few minutes, a diner would stop by to greet Neaves by name and ask if the new location was closing in on an opening date: “How’s it comin’ over there? Still February?” Neaves would giggle and, as if it were the first time he’d been asked, he’d say earnestly, “Maybe March. When it’s right. I’m not gonna open ’til it’s right.”

From the looks of the crowd that day, Neaves can likely bide his time until that moment arrives. “I don’t like doing things fast,” he said. “I wanna grow into stuff.” Still, he’s nothing short of giddy giving a tour of the new Naaman’s. At the construction site, Neaves spoke of finishing touches in an electrified, but hushed tone — less like he was preparing to open a new business and more like he was getting ready to throw Texarkana locals the dinner party of their lives. “I gotta have shock value,” he said, showing off an architectural quirk and then asking immediately that it be kept secret. The former Naaman’s catering delivery car — an antique Chevrolet panel truck — had been wheeled in before the entryway was closed off, and was now winterized and protected from construction dust by a taupe-colored coverlet, standing guard at the north window. A 20-by-48-foot onsite smokehouse had been erected. Neaves deliberated about whether to bring over one (or all) of the “Real Q” buckets as a nod to the old place. 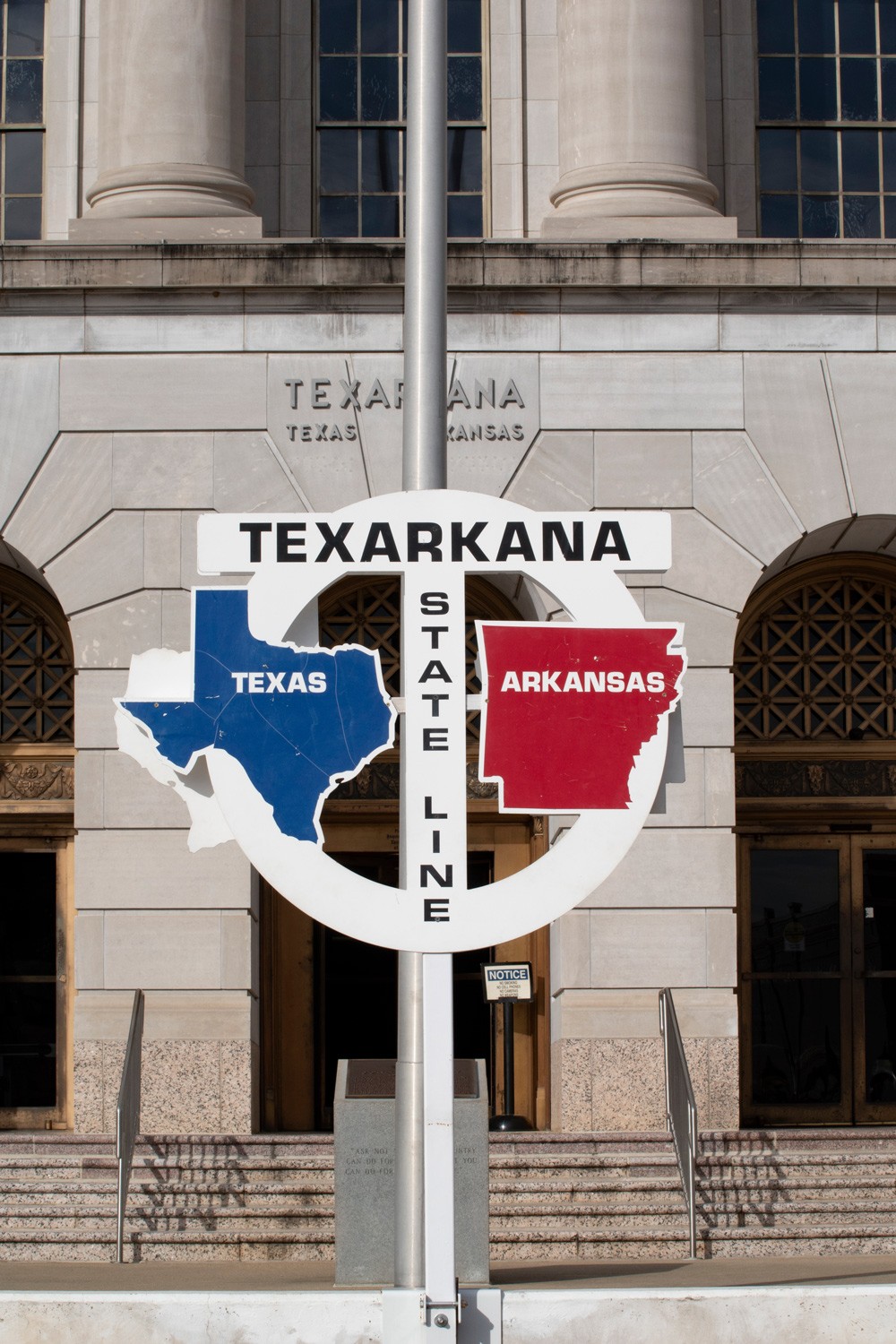 If they do make it across the state line, those buckets will likely be accompanied by the fruits of another of Neaves’ passions: antique collecting. The Texas dining room is a bit like a curio shop: A delicate mid-century pink dining table is lit by a rotating chandelier in the dining room, a framed photo of a chubby infant has been labeled with a tiny plaque that reads “Fat Baby,” and the machine dispensing Dallas-based Oak Cliff, Texas, “real sugar” soda is as in keeping with the decor as it is with Neaves’ disdain for high fructose corn syrup.

In the lobby, a rustic faux chandelier has been fashioned from keys suspended on tiny chains, and a large frame houses sheet music paying homage to Texarkana’s own Scott Joplin. The pull-chain toilet in the restroom is surrounded by vintage magazine ads imploring military women to satin-finish their lips and petal-finish their complexions while “serving shoulder to shoulder with America’s fighting men.” Metal signs for Grapette soda and King Edward Cigars hang high. “I want everything old-school cool,” Neaves said. He and his family have concocted some Naaman’s lore. Gesturing to a mural on the dining room wall of a distinguished gentleman smoking a pipe, Neaves said, “We call him Winston.” The Naaman’s sports a Prohibition photo doctored so that two protestors hold a sign saying, “Naaman ain’t pretty!” Neaves calls the two Marion and Duffy, after his grandparents 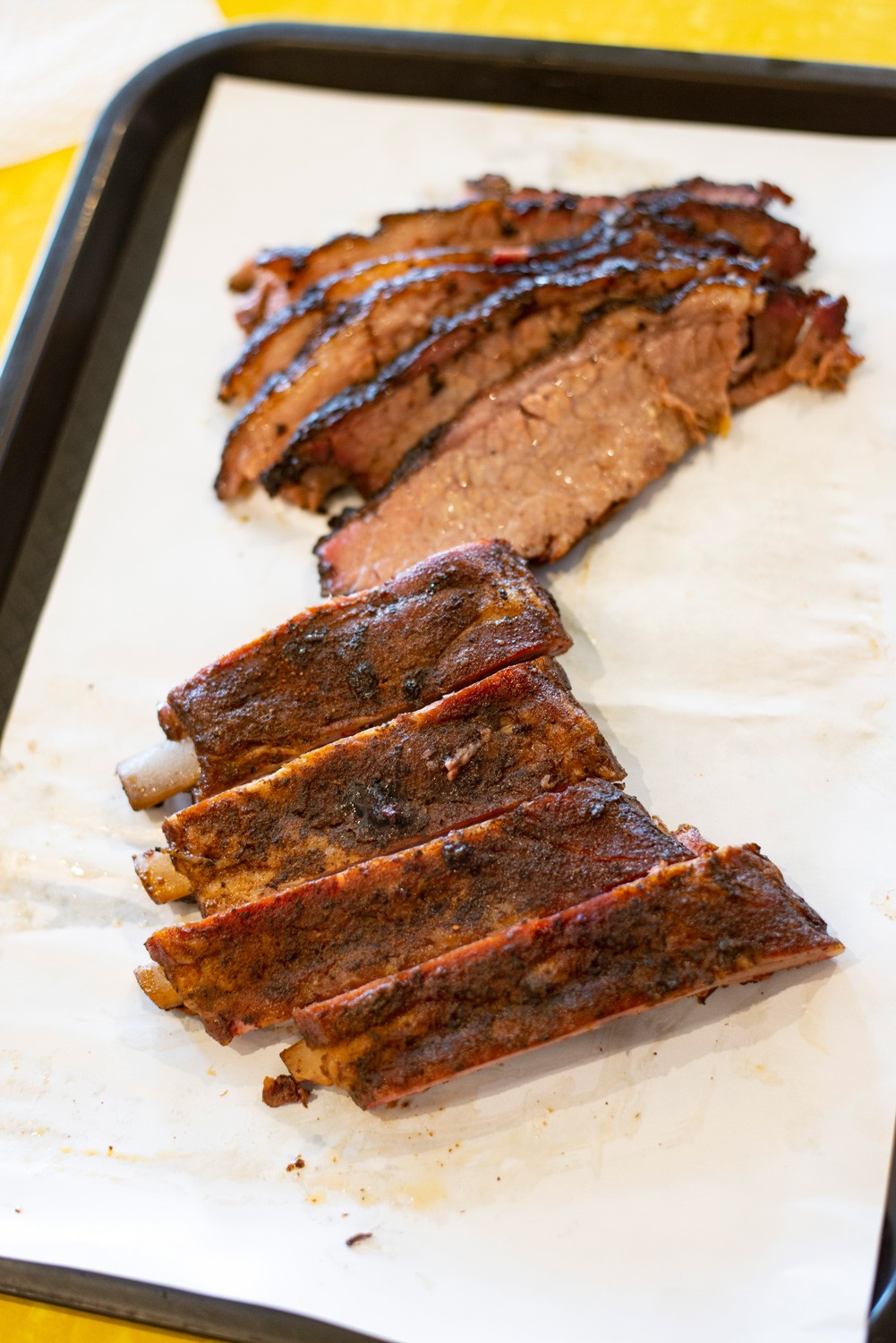 And, as family names go, Naaman is an especially important one. Neaves and Patti, his wife of 15 years, named the barbecue team-turned-restaurant after their son, then 3 years old. “I never dreamed it would turn into what it has,” Neaves said. Naaman is 14 now, and reportedly the best rib trimmer on staff. He’s a consummately polite kid, and on New Year’s he’s probably thinking less about rib prep and more about the Metallica concert his parents are treating him to in a few weeks. Asked about having his first name plastered all over billboards along Interstate 30, he was sanguine. “I’m kinda used to it,” he and shrugged.

“Nothing about Naaman’s is about money,” Neaves had said earlier. “That’s my son’s name. If anybody ruins that name, I want it to be him and not me. That name means more to me than all the money in the world.”

Neaves moved Naaman’s to the Texas side of the state line, in part, because he wanted to carve out his own piece of Texas barbecue culture — to be part of the scene, and part of a network of Texas pitmasters. Now, with all the patience of a man who cooks a hunk of meat for 14 hours, he’s crossing back over the state line. “Pork has been king in Arkansas,” he said. “But once you know how to cook a brisket … .” He trailed off, resuming the thought with: “I’m a beef guy.” I asked Neaves about his brisket recipe. He and smiled. “I could lie, but I don’t wanna be known for that either. We season. And we smoke.”