Brenda Martinez was 5 years old in 1998, the year her father, Rafael Martinez, named his Southwest Little Rock after her. Today, Tortilleria Brenda’s two locations produce and package upward of 30,000 tortillas every day, and the company remains the only business of its kind in Central Arkansas.

Rafael immigrated to the United States from Guanajuato, Mexico, in 1984 and spent time in Texas and North Carolina washing dishes and laying concrete before following his brother Eduardo to Arkansas to open a business. “El , ser jefe,” Brenda told me when I visited Tortilleria Brenda No. 1, located in a strip mall on 65th Street. (“He wanted something of his own, to be his own boss.”)

Twenty years later, Rafael now owns the original on 5317 65th St. and a second location at 7616 Colonel Glenn Road, which he opened in 2005. The second location is along the section of Colonel Glenn between University Avenue and Stagecoach Road, where you’ll find equal parts used tire shops and hole-in-the-wall restaurants, places like Dr. Detail, Chicken Cafe and the bygone Asher Dairy Bar.

Tortilleria Brenda No. 2 is directly across the street from Davis Trailer & Equipment and pretty easy to miss, if it weren’t for the cantaloupe-colored paint job and a small hand-painted sign bearing the company’s logo: a festive woman wearing traditional Guanajuato garb in red, green and white. She’s pictured mid-step and delighted to be carrying a basket full of tortillas. There is something deeply satisfying in visiting a local purveyor for a specific, handmade good.

A group of about seven workers produce the full suite of Brenda products: white and yellow corn tortillas, flour tortillas, crisp-fried tostadas and big bags of chips. They range in size from la for tacos — the size of a tea saucer — to a flour tortilla as big as a vinyl LP, intended for burritos. They are made simply, with fresh ingredients and seasoned machines.

During my trips to Brenda’s, I tasted tortillas straight off the conveyor belt, hot to the touch and expelling steamy air. The mouthfeel of a fresh corn tortilla is soft and pillowy. It may split easily under pressure, which is why many taquerias double-up under the weight of a meat filling. Fresh flour tortillas are equally soft, but have a tender elasticity good for burrito- or quesadilla-making.

On the back wall of Tortilleria Brenda No. 1 is a patchwork of Martinez family memorabilia: an assortment of framed family photos and certificates, a soccer trophy, a couple of crucifixes, rosaries and crafty greeting cards. Next to the family shrine is an equally impressive altar to the Virgen de Guadalupe, complete with (religious candles), an artificial magnolia garland and an enormous Mexican flag. Rafael proudly showed me Brenda’s quinceanera portrait, a 2003 award from El Latino for Best Tortillas and a photo of his hacienda in Guanajuato, where he still keeps cows and grows corn and wheat. 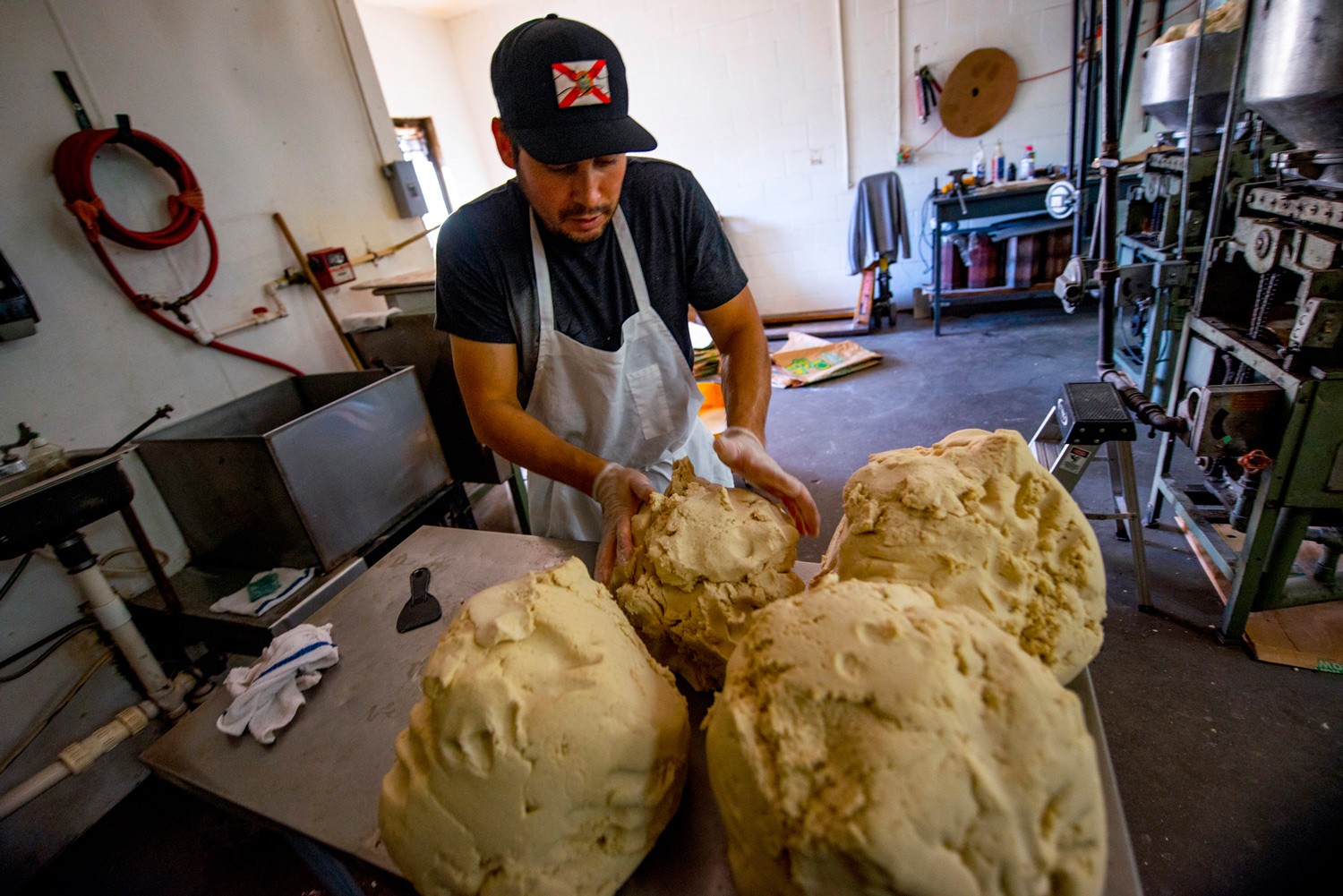 When he came to Arkansas, Rafael had never made tortillas on a large scale, but he was ambitious and determined to get his business off the ground. At that time, he told me, there wasn’t a large Mexican population in Central Arkansas, and certainly no in town. Rafael invested in a Celorio Tortilladora, an old school tortilla-making machine, and started visiting trailer parks off Baseline and Geyer Springs roads to sell his product directly to the community, going door to door.

The Martinez family has a distinct enterprising gene, and Tortilleria Brenda is as homegrown as it gets. Brenda greets customers and processes paperwork in the afternoons when she’s not in class at UA Little Rock, where she studies social work. Her brother Ramiro manages the Colonel Glenn location; another brother, Francisco, manages the 65th Street location; and yet another brother, Jorge, started Tortilleria Cadengo in Northeast Memphis. Rafael’s brothers Eduardo and David are the proprietors of Taqueria Karina (next door to Tortilleria Brenda No. 1 on 65th Street), Taqueria el Palenque (on Rodney Parham) and El Guadalupana on Colonel Glenn and Del Campo a la Ciudad at 6500 S. University Ave. The Martinez family is responsible for the sale of some of the best Mexican food in town. 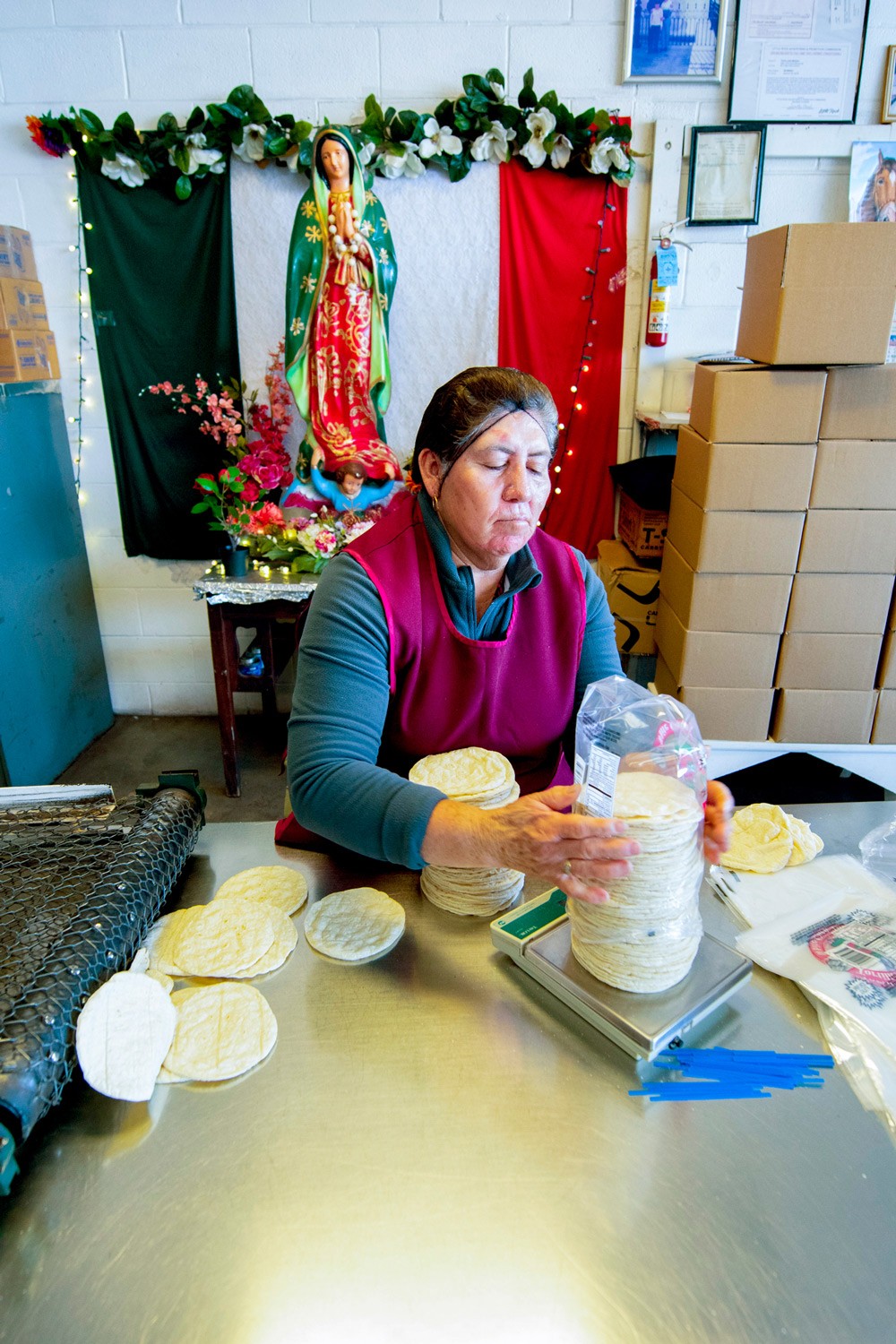 In both , the presence of the (tortilla making machines) is entrancing. The machines look prehistoric: They are dark gunmetal, heavy-duty and screech loudly with the sound of productivity. Their gears, levers and cogs are greased up and threaten to remove a careless finger at the blink of an eye. I asked Rafael if there had ever been an accident in his line of work. He smiled and raised his right hand, wiggling a little three-inch nub where his ring finger used to be.

Each has a large reservoir where enormous masses of kneaded corn masa are pushed through an extruder. I watched Francisco take good care of the dough, scraping and pushing it down through the canal. With bare hands, he slapped the dough into place, trimmed back the excess and started the process all over again. Chainmail conveyor belts then carry hundreds of tortillas from the mouth of a circular cutout, over a flame-heated surface where they cook and fill with hot air. The tortillas deflate and cool as they travel on a vibrating switchback before they get spit out in the next room.

The recipe for corn tortillas is as simple as it comes: water and Maseca cornmeal are combined into a dense, sticky dough. Tortillas de (flour tortillas) require butter, salt and baking powder. A worker in the rolls the flour dough into hundreds of small rounds, then places them, three at a time, on a machine that presses and flattens them in a split second.

The de (team of laborers) is the other star of the show, powered not by gas, but by a damn good work ethic. Moving in concert with the machines, the workers gather, weigh, count and package thousands of tortillas. They are masters of the assembly line and the twist-tie, they move swiftly and nonstop, catching and sorting each disc where it belongs. I talked to a number of folks stacking tortillas, and some had been working at Brenda’s for more than five or 10 years. The operation feels deeply community driven, and everyone I met was elated to share the tortilla-making process with a visitor.

Tortilleria Brenda No. 2 caters to the commercial market, selling to local , grocery stores and restaurants in Central Arkansas and as far as East Texas. Brenda’s owns the local tortilla market, but is rivaled in Northwest Arkansas by Los Altos Tortillas as well as La Banderita, a national producer with plants across the U.S and which sells in Walmart and Target. Francisco explained that business has gotten tougher as more varieties and brands saturate the market, but he claimed that no other tortilla is a fresh or small-batch as Brenda’s. 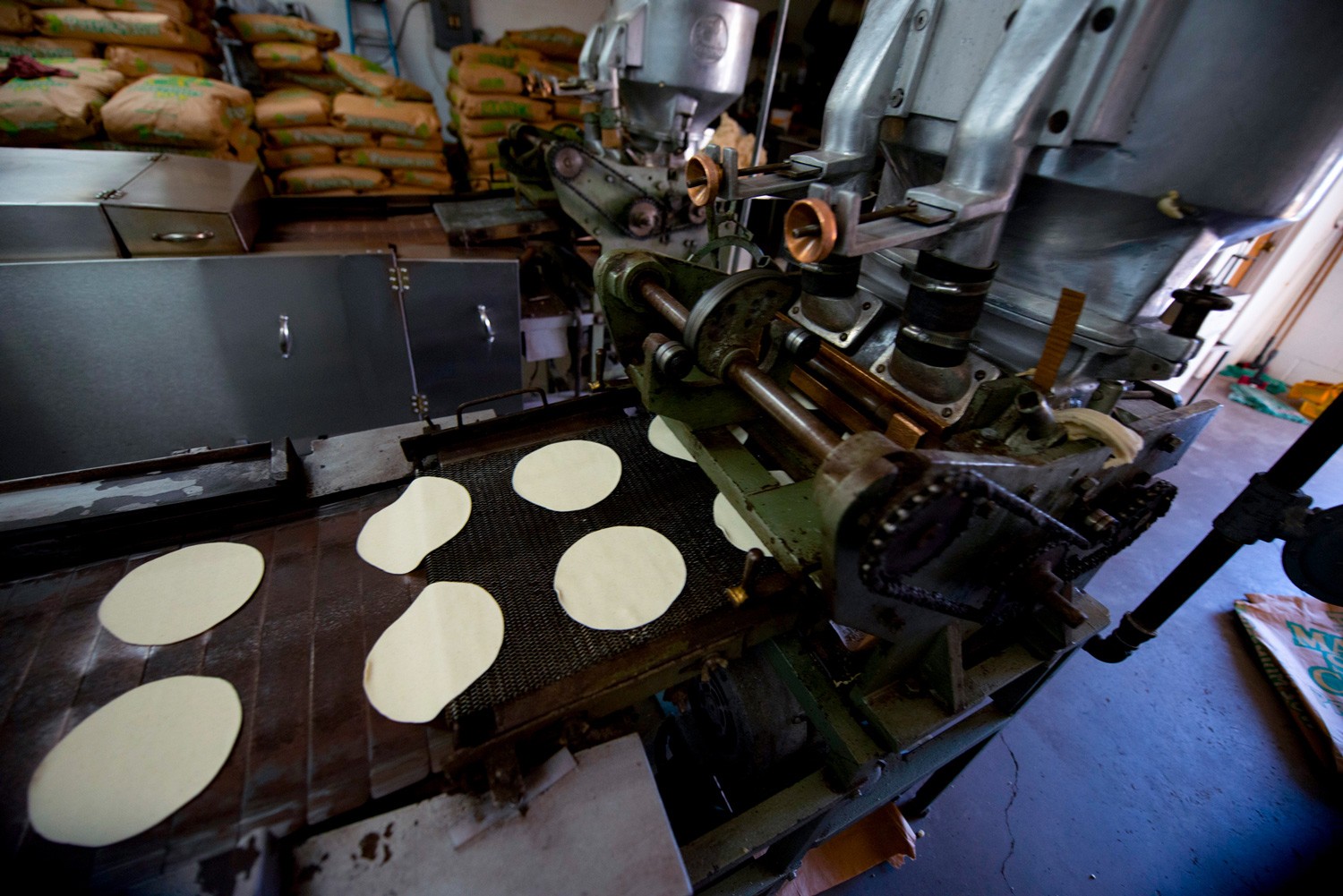 Tortilleria Brenda No. 1 on 65th Street has a small storefront for individual shoppers. There you can grab a bag or two of tortillas for your pantry. A large cooler is stocked with homemade (Mexican caramel sauce), Nopalitos (diced Nopal cactus) and orange Fanta in glass bottles.

At Tortilleria Brenda No. 1, you can buy a five-pound bag of corn tortillas for $3, piled 60 high. A two-pound bag will set you back $1.50. A bag of chips is $2.50 and tostadas are $1. Ten medium flour tortillas cost $1.50 and 12 huge tortillas are $2.50. In other words: Brenda’s is a steal, and there’s nowhere else in Central Arkansas to get tortillas as fresh or handmade.