Little Rock’s newest sweet-treat franchise, Hurts Donut Co., touts its brand as the “rebel of all .” Piled high with themed toppings, many of the Missouri-born chain’s zany offerings resemble edible toys, bordering on the grotesque. They bear names like “White and Nerdy” and “Cosmic Brownie” — novelty concoctions dusted with cereal and crushed-up candy bars, crawling with gummy worms, slathered with neon icings, sprinkled with bacon and cookies. As someone whose donut tastes typically tend toward the prudish — a standard glazed here, an old fashioned there, the occasional fritter dunked in black coffee — I’ve been scandalized, but morbidly curious, since Hurts opened Feb. 27.

Ahead of its 5 a.m. opening day, people were camped out in front of the store to be among the first to get a donut. What compelled these would-be patrons to sacrifice their evenings standing in sluggish lines, huddled in the rain and cold, all for a few morsels of fried and sweetened dough? What was I missing?

I needed to know, and so I set out to test their wares. Inspired by Hurts’ billing as a 24-hour establishment (or, as their marketing cheekily spins it, “25/8”), my plan was to claim a table and hold court for half a day, from 7 p.m. to 7 a.m., observing the scene, quizzing fans and working my way through the chain’s vast, eccentric menu. I reported on a Saturday, having consumed nothing but a handful of olives. I took my place in the snaking line and settled in for a long wait.

One of my linemates, a young man with braces and wearing a smart dark suit, admitted he’d escaped the Hope Ball prematurely with his companion, bored and craving sweets. His sights were set on a “Cereal Killer” donut covered with Cap’n Crunch. A volleyballer from Hot Springs named Nena raved about the cookies-and-cream option. A twentysomething named Jazz declared allegiance to straight-up glazed. Three girls ahead of me — Chloe (9), Lauren (10) and Ava Kate (11) — schemed, fidgeted and eyed the display case with covetous stares. 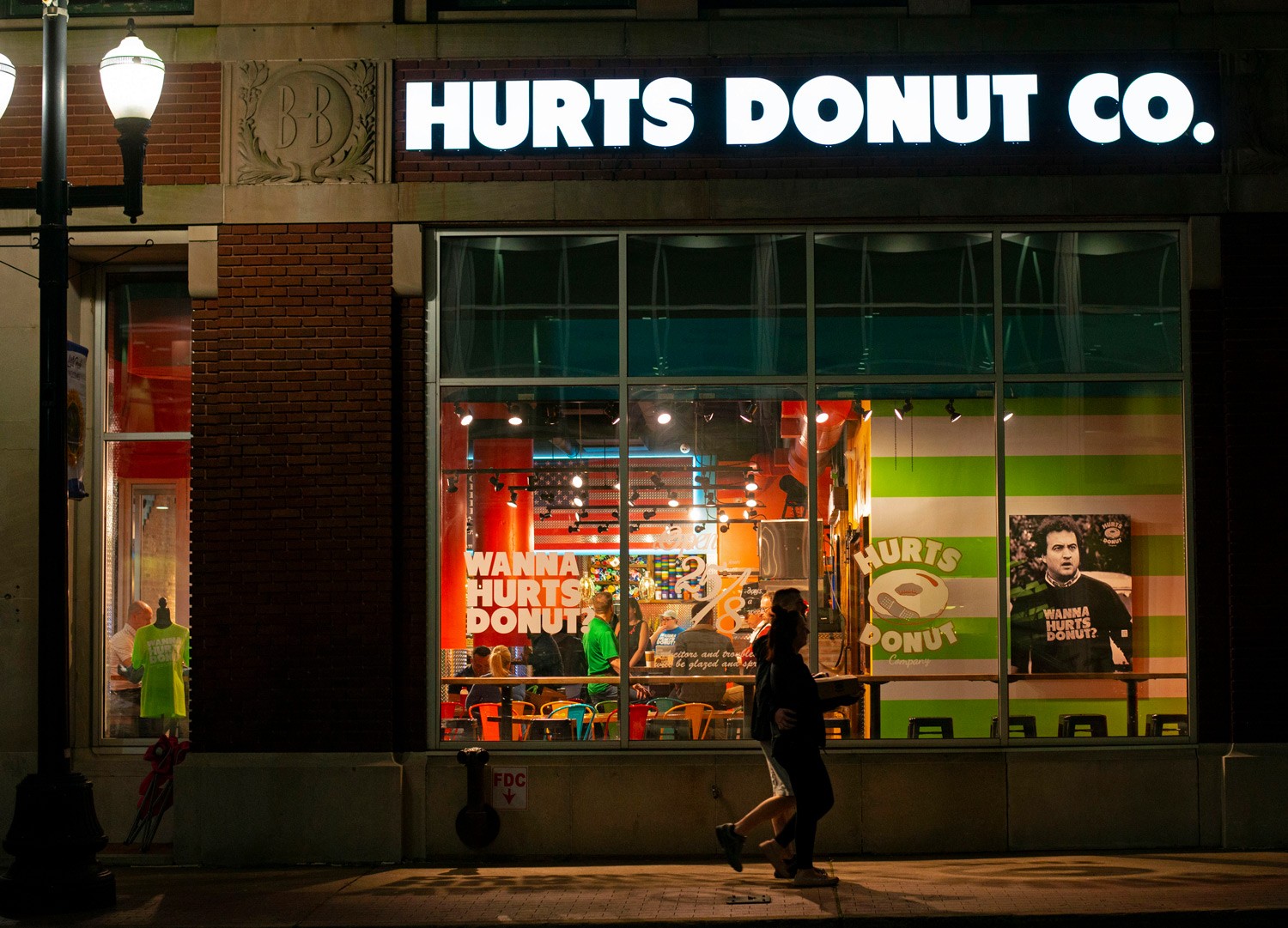 In the peak of the first rush, I saw one lone, befuddled dad from Oregon — in town on volleyball business — stumbling through the swarm, searching for his daughter, who had giddily rushed ahead. We locked eyes for a moment. “What is it about this place?” he asked me, desperate and confused. I shrugged and pointed my finger, directing him to the end of the line.

“We just fell in love with the concept,” the franchise’s co-owner, Heather Grimes, told me as we shared a table around midnight, during a rare lull.

She recalled a moment in the spring of 2018, when she and her husband, Connor, stepped into a Hurts Donut shop for the first time in Branson, Mo. “The bright colors on the walls. The vibe. It’s just not your average donut shop,” she said. Shortly after that trip to Branson, they approached the company’s founder. “We want Little Rock,” they told him.

Less than a year later, their dreams materialized on the 100 block of East Markham, nestled across the street from the Statehouse Convention Center. Since then, they’ve experienced a steady throng of customers. Their shop, the company’s 22nd location, made 890 sales over the course of the Saturday I visited.

Absurdist themes aside, the Grimeses take pride in the inherent quality of every product they sell. Before they’re loaded with signature toppings, Hurts donuts fall into three distinct categories: yeast-risen, white cake and chocolate cake, all of which are made in-house and from scratch, with no frozen ingredients.

The “Jesús” donut, Heather told me, is their best seller by far. The recipe is simple: a white cake base with vanilla icing, dipped in cinnamon sugar and drizzled with caramel.

After a knee-throbbing, 74-minute wait on my first trip to the case, I placed my order with a gregarious employee named Cole. I opted for the “Hurts Dozen,” which saves you a few bucks and averts paralysis of choice by allowing the staff to pick 12 styles at their discretion. I got an iced coffee, too, and spent my donut savings on the upcharge of adding glitter — no kidding — to my drink, which shimmers when you jostle the cup and hold it up to light. 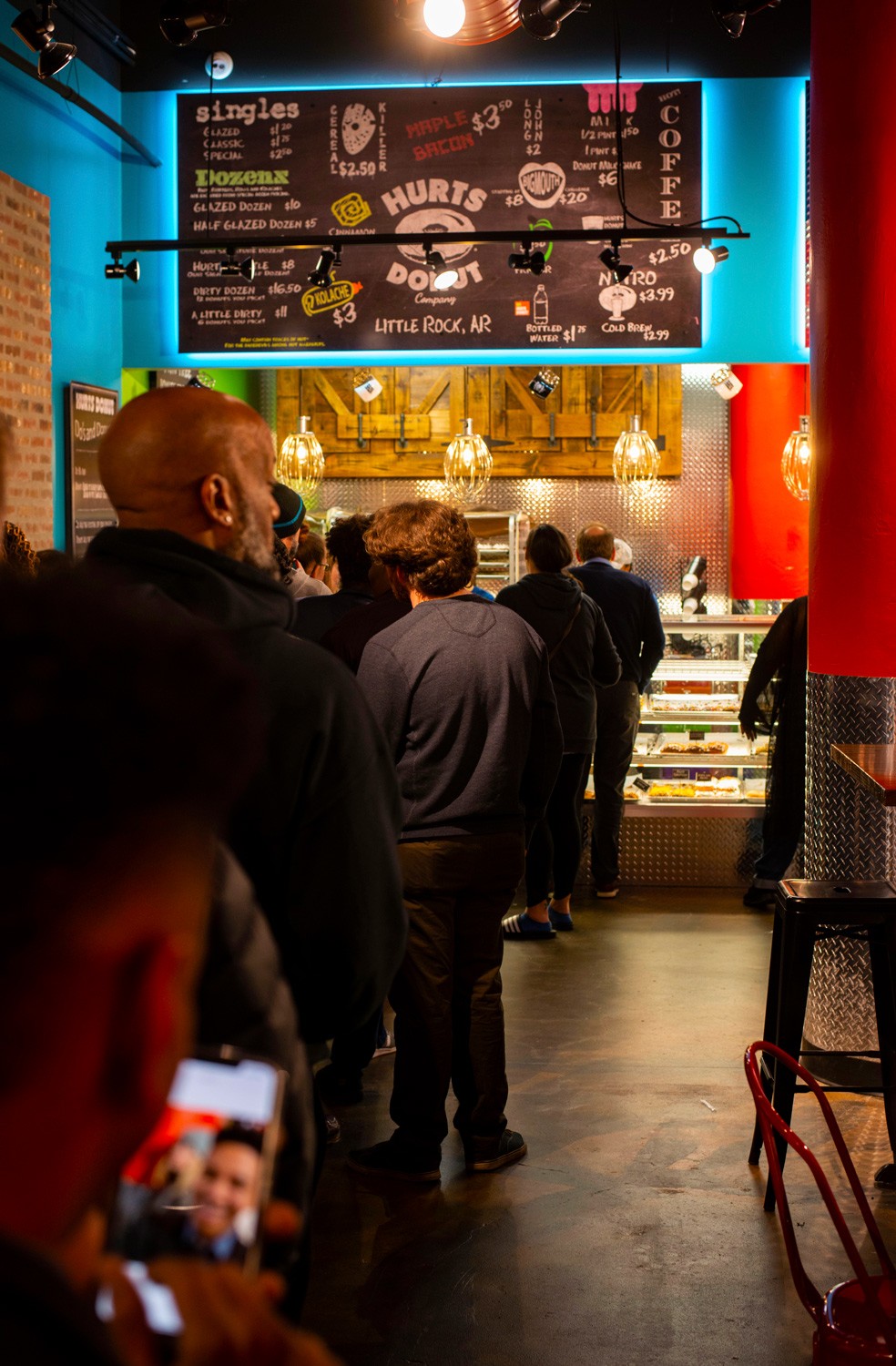 Freed from the line, I got down to the business of tasting. To my surprise, despite the weight of icing and garnishes, my yeast-risen donuts held the appropriate loft and structure, not too airy and not too dense. The range of texture was a testament to judicious frying: faintly crispy on the exterior, with an oil-free, pillowy interior.

The cake donuts, too, while not exactly delicate — most configurations weigh close to a pound, it seems — maintained balanced flavor even without their quirky toppings. All told, after doubling back and waiting in line once more, I sampled over 16 styles of donuts that night. I put two yeasted versions at the top of my list, one of which cradled a dollop of Nutella at its center, the other a sprinkling of Fruity Pebbles. My two bottom-rung picks were cloying cake bricks, topped with crushed Oreos and powdered Tang.

Between tastings, holed up in a quiet-ish corner, I tried my best to assess the venue as an all-night hangout. Amid the undulating din of customers and the store’s piped-in pop music, I composed several emails, wrote a heartfelt longhand letter to a friend, listened to Solange’s new album, and scanned Zillow for dream homes on the opulent canals of Venice, Calif. I watched the first half of “Legally Blonde.”

Meanwhile, a late-night Little Rock tableau developed. Sometime between 1 and 2 in the morning, a rowdy quintet of Air Force bros in boat shoes and crew cuts came whooping in and demanded kolaches. Around 2:30, a man dressed in all black and a top hat appeared, ushering an elderly fellow hunched over a walker. At 3:56, a posse of cops streamed in and stoically munched their Jesúses.

The cops were followed by a troupe of drag queens who threw open the doors and strode through the premises, striking poses and blowing kisses to all. Hurts staff trickled out from the kitchen and took selfies with the queens in front of the soda fountain. It was a joyous affair, and my mood — growing more sour and fatigued by the minute — took a turn for the better. I refilled my cup of glitter coffee, leaned back in my seat, let another hour pass, and watched a courteous, pre-church crowd begin to accumulate.

Eventually my sentence neared its end, and I could see hints of sunlight reflected in the windows across the street. For the first time in what felt like weeks, I stepped outside, a little sweaty and ashamed.

I was glad to leave, but an unexpected sentiment materialized. I had, in all honesty, prepared to condemn the place and its clientele on the basis of its gimmick alone, the relentless puns and unabashed kitsch, but the night had had the opposite effect. I’d come searching for a particular type, and had instead found too many to list. Those 12 hours, in fact, constituted the most democratic space I’d experienced in a long while. I’d discovered and strange Hurts family there, congregating around those ridiculous, colorful rings of sugar and flour.