This is a milestone year for Lisa Zhang. It’s the fifth anniversary of Three Fold Noodles and Dumpling Co., her wildly popular authentic Chinese restaurant in downtown Little Rock, and her 20th year in the United States. It also marks a year of expansion with the opening in May of her Chinese chicken restaurant Haybird (“Where East Meats West”), and the development of a new 9,000-square-foot project in Riverdale, slated to open next year, which will house three concepts: an expanded and relocated Haybird; Eastern Pantry, a sort of deli with take-home meal options; and a sake brewery.

Zhang, 55, grew up making dumplings as a child in Manchuria and still cooks the way she learned: by feel without recipes. “I throw things in and I taste it,” she said. “The real cook for me cooks without a recipe. You need to cook with your sense. Eighty percent is science; 20 percent is art.”

But that tendency to quantify speaks to another side of her: She spent more than two decades in business management in China and later in Dallas and has an educational background in science. She obsesses over tweaking the systems and processes that she has in place to translate her sensory method of cooking to her teams in her restaurants that serve hundreds of customers a day.

When she decided to relocate Three Fold from 215 Center St. to 611 Main St. in 2017, she framed the move not by talking about Main Street being a more appealing location or the space having a larger dining room, but in terms of getting a new kitchen that would allow her to serve her dumplings to customers seconds after they were cooked. The dumplings, or shui jiao, she introduced on Center Street — thick pastries filled with pork, chicken or veggies and tofu that in assembly get the three folds that give the restaurant its name — had developed a devoted following. But Zhang couldn’t shake the frustration that the Center Street kitchen’s limited space kept her from serving her dumplings and noodles as piping hot as Chinese people dining in their home country would expect.

Zhang describes her business philosophy as simple: to make money to benefit all the people working in her restaurants and benefit the Chinese culinary tradition. “As a Chinese [person], if you ask me, what is the most important or precious thing in your culture? Eating food. Because of the long history and wisdom.” She’s especially interested in Chinese “street food” and “the simplicity in the creation” developed over the course of hundreds of years. “A dumpling, it satisfies your tongue, your taste buds,” she said. “And it makes you wonder, why is this dumpling so good? How is it made, where does it comes from and why is it good?” She has counted and determined that one dumpling includes 24 ingredients and takes 21 steps to finish. “That really represents the delicacy of Chinese cooking,” she said.

Zhang and her chemist husband, Jian Yan, and their then-8-year-old daughter, Rebecca, moved from China to Arkansas in 1999 after Jian got a job at the National Center for Toxicological Research in Redfield. Lisa, who had worked in China monetizing academic research, couldn’t find a job in Central Arkansas, so she moved to Dallas to work for a Chinese company with a manufacturing facility in Texas that provides display furniture to retail chains. She began as a project manager, but rose to a senior vice president position. “People ask how I learn English. You’ve got to get in a fight,” she said, laughing. “As a VP, any kind of product not going right, people say, ‘That’s not my problem.’ That pushed me to have to speak and helped me learn American culture.” She said working with the company’s wood and metal shops also gave her experience that’s come in handy as she’s developed restaurants.

After 10 years in Dallas and with Rebecca off to college, Lisa quit her job and enrolled in The Art Institute of Dallas’ culinary school, where she studied American regional cuisine. That background enters into her thinking as she decides what parts of Chinese cuisine to introduce. The pork steamed bun at Three Fold, for instance, isn’t that far from a pork barbecue sandwich. The day I visited with her, she said she had just been talking with Rebecca, who has been in management in Three Fold and now Haybird since Three Fold opened, about how to introduce new authentic food. “I want to give the best. I want to give 100 percent, but maybe people can only take 70 percent,” she said. 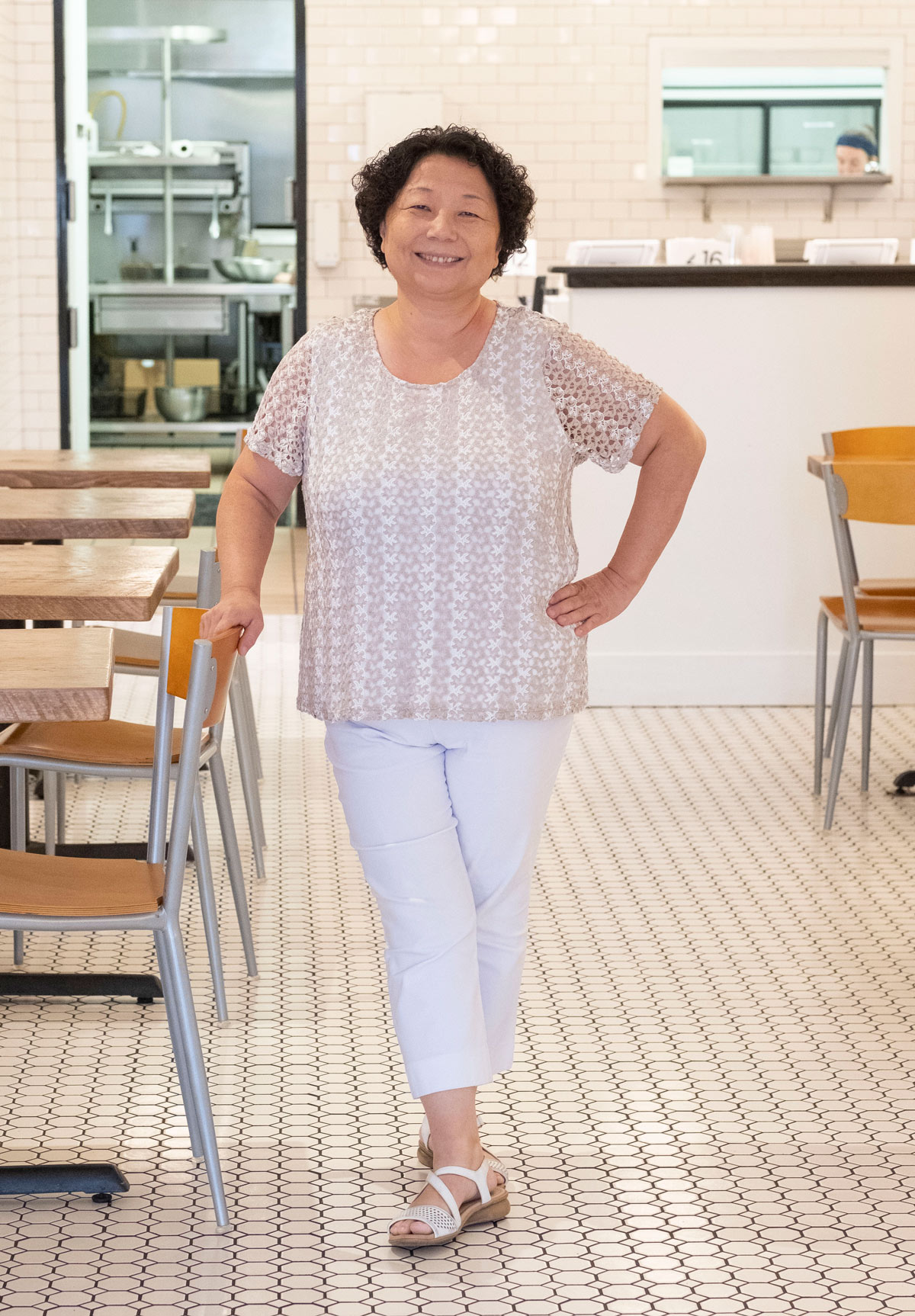 The Haybird concept seems safely within the 70 percent threshold. “Little Rock should have more variety since we’re in chicken country,” Zhang said. The menu, like Three Fold, is relatively spare and straightforward. The fried chicken is the star. It gets butterflied, marinated for 24-48 hours, breaded with seasoning and gluten-free rice flour, fried and then seasoned again. You can get it atop a mound of deliciously salty shoestring fries — the “hay” in Haybird  — on a bed of Napa cabbage, gelatinous and toothsome wood ear mushrooms and cilantro, or as a sandwich in a thick, pillowy steamed bun that’s been pan-fried. Pickled carrots and daikon feature on all the dishes as does a peppery sauce that resembles the Three Fold dumpling sauce and comes in four spice levels, from nonspicy to poison (if you like a kick, poison is the way to go). All those options are also available with vegetarian “chicken,” made with wheat protein and two types of mushrooms, then fried. Packed with rich umami flavor, it’s the best meat alternative I’ve ever tasted.

But Zhang can’t help but introduce menu items that don’t share much common ground with standard American cuisine. At Three Fold, it’s the beef soup noodle, a piquant, layered and deeply satisfying noodle soup made with beef shank. At Haybird, it’s the dishes that feature the marinated fried eggs — the Eggwich, a steamed bun sandwich filled with two eggs and pickles, and the chicken salad, featuring braised, not fried, chicken and an egg. The eggs are deep-fried, a challenging process that requires a cook to control the temperature of the oil and flip the egg at just the right time (“An egg can be a bomb,” Zhang quipped), and then marinated for several hours. It’s a gooey, slightly chewy revelation.

By happenstance, the old Three Fold location on Center Street became available for lease earlier this year after Hanaroo closed. Zhang seized on the opportunity to roll out part of the Haybird plan and call it a “pop-up.” Typically, pop-ups come and go in different locales. This one will remain open on Center Street until the lease is up at the end of April 2020.

The plan for the Riverdale outpost, which is scheduled to open next spring, is to expand her offerings. The Haybird menu will double in size, Zhang said, with many more braised chicken options and other items, like chicken gizzards, that pair well with alcohol. Sake is the Japanese word for alcohol; in the Western world it’s come to stand for certain kinds of Japanese rice wine. But there are dozens of other rich traditions of rice wine brewing, including several in China. She says that perhaps in the early going of Three Fold, she misled people by describing the menu as simple. “In China, traditionally, if you eat dumplings, you go to dumpling shop. And there are hundreds of different types of dumplings.” The same applies to noodles, she said. The grab-and-go concept of Eastern Pantry will allow her to offer all sorts of variations on those staples. 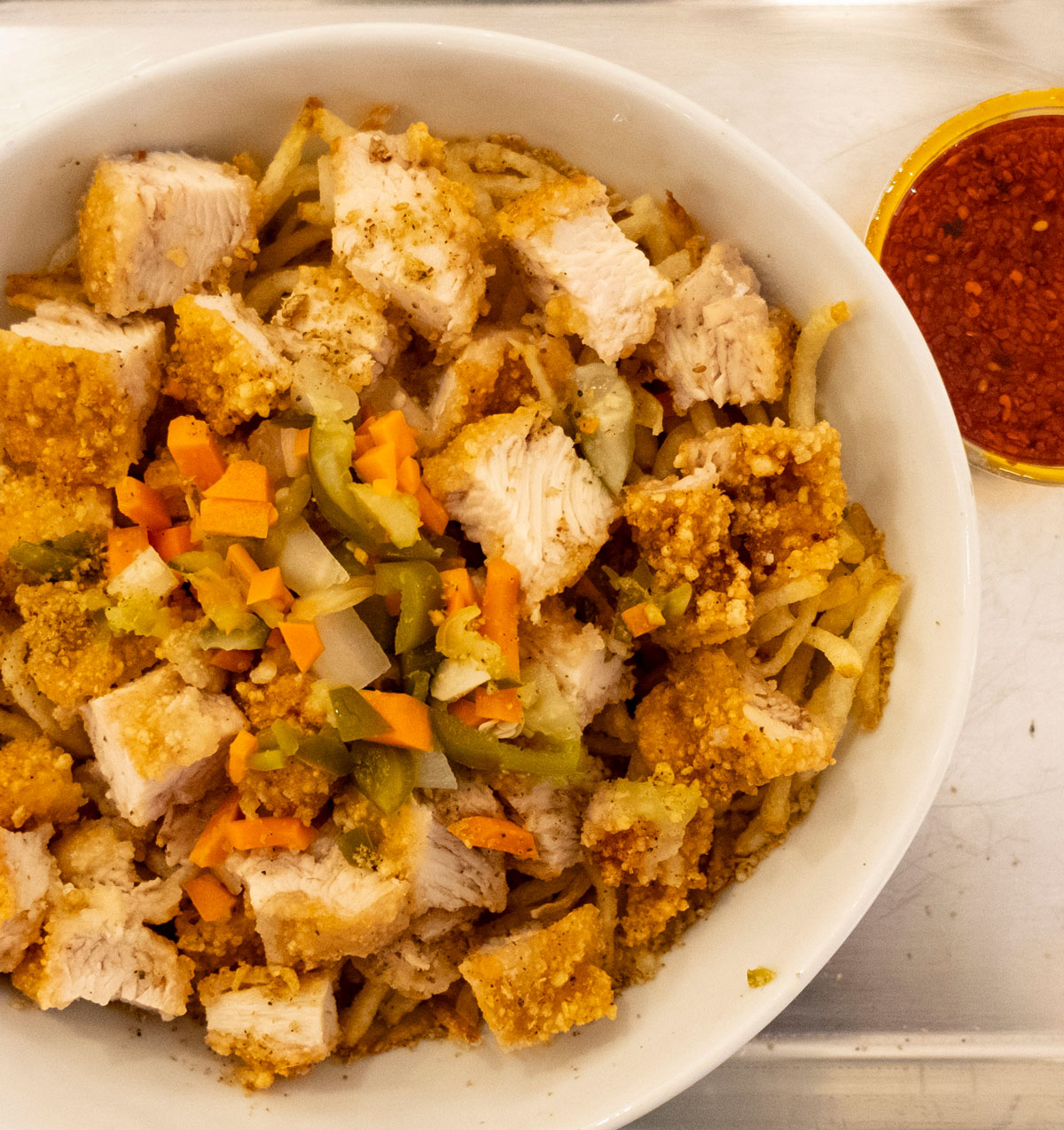 HAYBIRD, THE POPUP ON CENTER: Now in the old Three Fold space, Haybird, purveyor of fried chicken — both vegetarian and real — will eventually be located in Riverdale.

The new location will also shift some of the production away from Three Fold. The dumplings will be assembled in Riverdale and then cooked on Main Street. Three Fold was originally conceived as a franchise. Zhang isn’t sure whether she’ll go that route, but she said it has been impossible to consider without a production facility.

In late September, Three Fold was set to undergo a minor kitchen renovation that would speed up the dumpling production and allow Zhang to serve guotie, a more authentic type of pan-fried dumpling.

Zhang was right about the move to Main Street. Business is booming, up 50 percent from what Three Fold did on Center Street with room to grow, Zhang said. And just as important to Zhang: The already great dumplings do indeed taste better.