Despite having operated for decades, Leslie Odom had no idea what to expect out of her fruit stand’s opening day. Odom, who owns Holland Bottom Farms in Cabot with her husband Tim, normally marks the start of the season with lines of people waiting to get the farm’s signature strawberries. It’s an annual rite that stretches back generations.

But in the era of COVID-19, there was no telling what the circumstances would drive to — or away from — their door. Even without the pandemic to think about, the farm was auditioning a new stand location on Bill Foster Memorial Highway, its previous one eaten up by the widening of Hwy. 321. And the town’s annual Strawberry Festival, which always helped drum up interest in the crop, had been canceled due to the virus.

“We just roll with the punches,” she said. “You do what you gotta do. You get really inventive.”

On the eve of the April 1 open, Odom and her crew packaged the crimson berries, posted updates on social media and crossed their fingers.

In any given growing season, there are hundreds of risks that face the typical small farm, from bad weather to floods to bugs. But like every other segment of society, the 2020 growing season has also unfolded beneath the spectre of COVID-19. And while the U.S. Food and Drug Administration stated unequivocally on March 17 that there was “no evidence” of food or food packaging transmitting COVID-19, there’s still plenty of uncertainty for Arkansas’s small farmers.

Travis Short, owner of Farm Girl Meats in Perryville, said the most pressing issue comes down to finding efficient ways to reach customers. As community festivals are canceled and more farmers markets face uncertainty in the era of social distancing, gaining access to the public is becoming more difficult.

“The place to sell has been the problem,” Short said. “We’ve been doing farmers markets for a number of years; that’s kind of our setup. Our farmers market closed down because it’s located close to a daycare and there were concerns. Then there’s a few restaurants that we sell to occasionally, but that’s slowed down as well.”

Short invested in a trailer last year that resembles a food truck, which he deploys as a meat market on wheels. He reached out to the owners of a Little Rock tavern and secured space in the parking lot for a pop-up market March 21 and then another one a week later with plans to do more for the foreseeable future.

“The guys at White Water Tavern are friends of mine. So, they let me set up in their parking lot a couple weeks ago,” he said. “There’s definitely people who are interested in [these products]. Sales have still been good when we’ve been open and when we’ve found a place to sell, so that’s encouraging.”

For the markets that are operating, dealing with COVID-19 has meant overhauling protocols to keep workers and customers alike safe.

The Arkansas Local Food Network is a co-op that connects consumers to about 30 small farmers and artisan foodmakers via a virtual market run out of St. Margaret’s Episcopal Church in Little Rock. ALFN halted work for two weeks in March to recalibrate its operations, Katy Elliott, ALFN board chairman, said.

“We redesigned our delivery, order packing and pick-up process,” Elliott said. “We posted to our website the different measures that we’ve put in place.”

The changes cover everything from additional actions on the part of the farmers — such as signing off on wellness checks and performing additional sanitizing duties — to changing how workers package and present goods to consumers.

“As part of our order packing, we’ll be wearing masks and gloves to keep our hands off our own faces and to keep things clean,” Elliott said. “We’re washing our hands frequently and packing in new bags where we used to use recycled Kroger bags. We’re wiping down bags and food containers when it’s possible, things like that.”

“We shifted our pick-up from inside the church where our office is located to outside, so people will drive up, text their name and then we’ll text them back when their order is ready. They will pick it up off of the table outside and on that table, we’ll sanitize between pick-ups. We’re also asking that people who pick up take care to clean their products again [at home].”

ALFN was already equipped with a good system for consumers to place online orders, which are then filled, labeled and packaged at the farms before delivery to the pick-up location. Many individual farms are now starting to follow suit, investing in online ordering options with various degrees of sophistication. It’s all part of the work of figuring out the new reality, Elliott said.

“We’re essentially venturing out in a new circumstance, farmers are being very deliberate about how they’re marketing their food,” Elliott said. “There’s a lot of concern about the you-pick operations and if they will be able to continue through this season or if they need to find alternative means. Everyone is just working around, ‘How do we meet the demand now?’ ”

Holland Bottoms’ opening day proved to be a short affair, with every last berry sold inside of 40 minutes. The next day, April 2, traffic backed up the highway, prompting Cabot police to order the market to open early to help ease the strain. The farm sold out in under two hours.

The farm first announced it would close the fruit stand on April 3, but reversed itself at 9 a.m. that morning. The short notice did nothing to tamp down demand; for the third day in a row, supplies sold out quickly. Such showings are good news for the farm and speaks to the demand for locally grown food.

“We have heard from our customers and everybody seems to be really receptive to the idea and they’re happy we’re doing a drive-thru,” Odom said. “I’ve heard some say, hey, we like this even better; we like being able to drive up. And they’re ready for fresh veggies. They’re ready to get out of the supermarkets.” 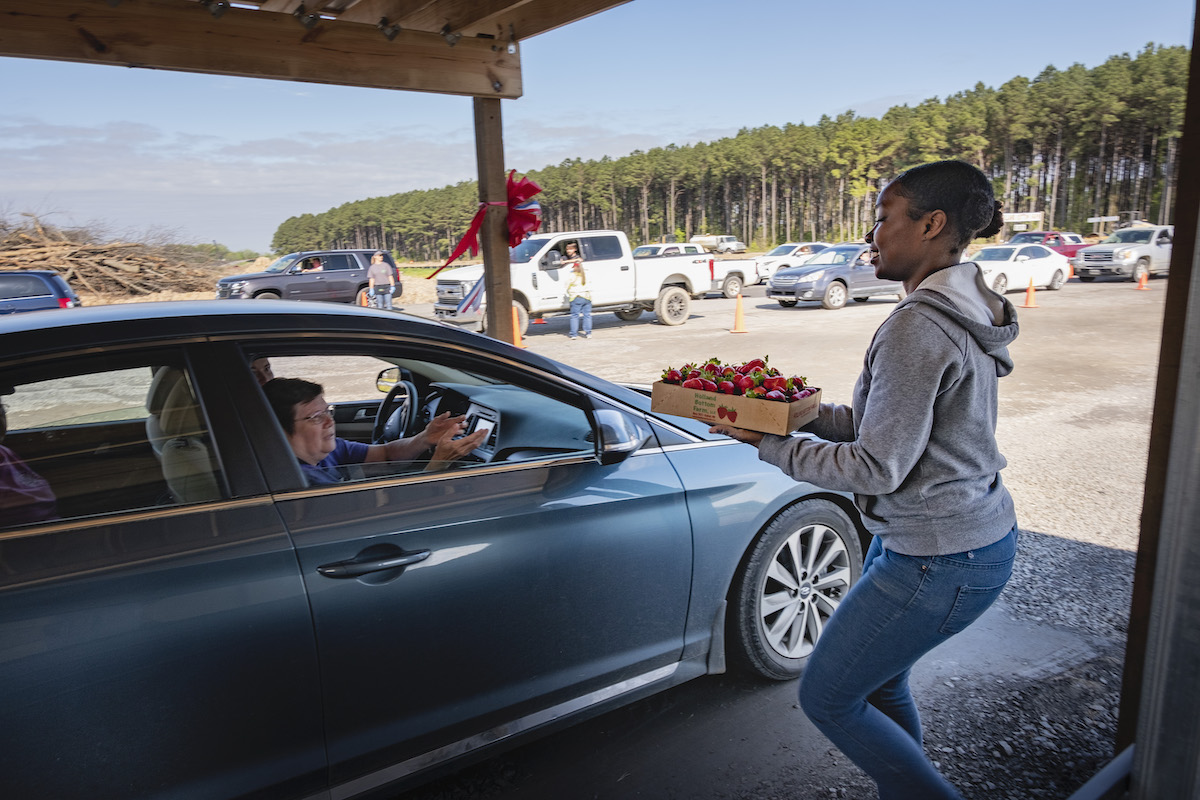 The farm continues to fine tune its fulfillment, maintaining social distance requirements for its 25 workers. It’s easing into online ordering and curbside pickup options in anticipation of the summer months, when its wider inventory of fruits and vegetables will be available. Odom said even with talk of a mandatory stay-at-home order, the company has no plans to limit production.

“We are trying to plant everything as we did last year,” she said. “We have several places we send food out to; we do a lot of wholesale as well as we have our fruit stand at the front. We’re going on as usual as best we can. So far so good — we’ve got a lot of stuff in the ground.”

This reporting is courtesy of the Arkansas Nonprofit News Network, an independent, nonpartisan news project dedicated to producing journalism that matters to Arkansans.